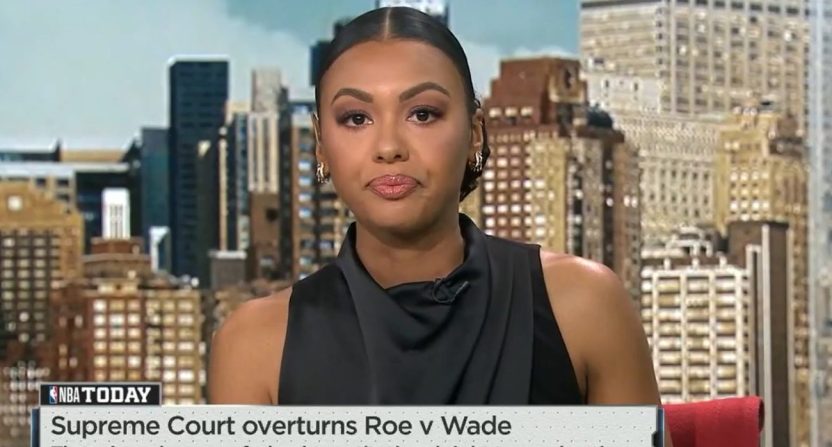 One day after celebrating the 50th anniversary of Title IX – legislation passed to provide equal opportunities in sports for women and prohibit sex-based discrimination at school – the Supreme Court voted Friday to overturn Roe v. Wade.

In 24 hours, we went from celebrating women’s rights, to taking a momentous step backwards by stating Americans no longer have a constitutional right to choose.

Throughout the day, many sports media members have used Twitter to speak out against the Supreme Court Ruling, but ESPN’s Malika Andrews was the first to use her platform on national TV to address the issue.

“Today, the Supreme Court overturned Roe vs. Wade, declaring that the constitutional right to abortion, upheld for nearly a half-century no longer exists,” Andrews said. “In less than 24 hours, we celebrated equal rights for women, and now we react to women’s reproductive rights being taken away.”

Andrews’ emotional commentary came a little more than halfway through ESPN’s Friday edition of NBA Today and less than 24 hours after she made history as the first woman to host the NBA Draft. She continued by reading a few tweets from athletes and teams which addressed the Supreme Court’s vote.

Below are a few other additional tweets from sports media members.

One of the worst American days of my lifetime.

We go from celebrating womens rights to dictating them again.

The justices who either misled or downright lied during their confirmation hearings for how they would handle Roe once they got on the bench should feel deep shame but clearly they have no capacity for such human emotions.

90% of Americans want common sense gun reform. There isn’t a state in the union that wants Roe V. Wade overturned. These aren’t divisive issues no matter what cables news and this app may convince you of. The Supreme Court just trampled the overwhelming will of the people.

In 2018, ESPN president Jimmy Pitaro implemented a stick to sports mandate. Despite that policy, the company continues to allow its talent to address certain issues. While the lines can certainly get blurry in terms of what’s permitted to be discussed and what isn’t, the list of matters that have been addressed should be commended, including the murder of George Floyd, racial inequality, sexual orientation, gun control and women’s rights.