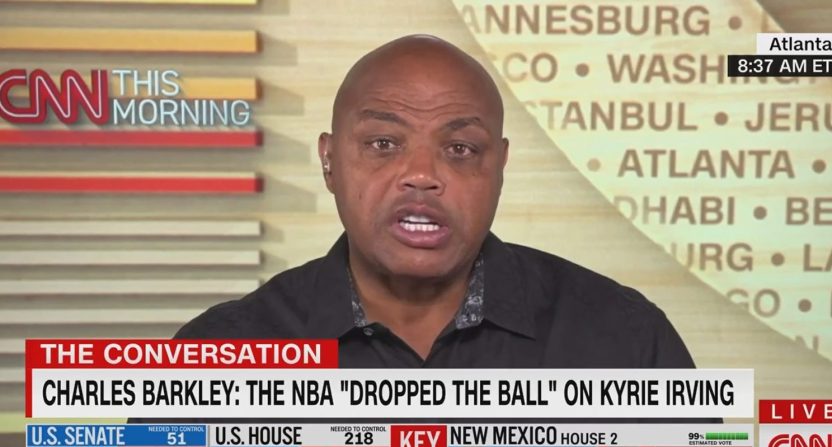 Despite his propensity to speak brazenly or offhand, Charles Barkley doesn’t fear cancel culture because he doesn’t believe in cancel culture.

Warner Bros. Discovery NBA on TNT analyst Barkley joined TNT’s sister network CNN Tuesday. He appeared on CNN This Morning with hosts Don Lemon, Kaitlan Collins and Poppy Harlow to discuss the latest surrounding the Kyrie Irving controversy. Irving is currently suspended indefinitely by the Brooklyn Nets for linking to an antisemitic film on his social media pages and failing to properly apologize or disavow its offensive tropes.

Barkley was one of the first people to blast Brooklyn for initially allowing Irving to keep playing in the wake of his antisemitic controversy. Tuesday morning, he slammed any of the NBA star’s defenders who have cited freedom of speech.

"People have the right to feel and say what they want to, we have freedom of speech, but there are repercussions when you say certain things."

Charles Barkley says the NBA "dropped the ball" on Kyrie Irving and the action it took surrounding his antisemitic tweet. pic.twitter.com/t7ZmUqXNOw

“People always talk about freedom of speech, you can say whatever you want to. But there are repercussions,” Barkley said on CNN, supporting the decision to suspend Irving. “This thing with free speech has really gotten out of hand. I mean, you just can’t go around insulting people and think it’s OK just because it’s freedom of speech.”

Those who have been called out for acting irresponsibly and believing freedom of speech is a ticket to insult a person or group of people often push back on any public retribution by blaming “cancel culture,” a concept Barkley similarly ripped on CNN.

“I don’t like using the term cancel culture because I don’t want anybody canceled,” Barkley continued while noting he believes Irving should eventually return to the NBA. “But you should be called to the carpet if you said something wrong. I don’t believe somebody should use their job or things like that, but you should be called out if you said something stupid. I’ve been called out many times, but I hate the term cancel culture, because very few people are canceled, let’s be honest and realistic.”

Barkley’s assessment of cancel culture appears to have changed from last year, when he criticized the stigma during a radio interview on 106.7 The Fan in Washington DC.

“The PC people are out overboard right now,” Barkley said last year on The Grant and Danny Show. “I can’t imagine you guys doing a show every day, how crazy it is for you. Like, it’s gotten so out of hand right now, I couldn’t imagine having to watch myself. You can’t even have fun nowadays without these jackasses trying to get you canceled and things like that.”

But if “cancel culture” just forces people to censor potentially offensive terms from their vernacular, then maybe it isn’t as overboard as Barkley initially perceived. The concept of “cancel culture” is a broad crutch that gets leaned on whenever a notable person faces consequences for self-inflicted controversy and attempts to play a victim rather than address the issue. And if you watch TNT’s Inside the NBA, it doesn’t seem like the movement has caused Barkley to worry about censoring his jokes and opinions too much on national television.