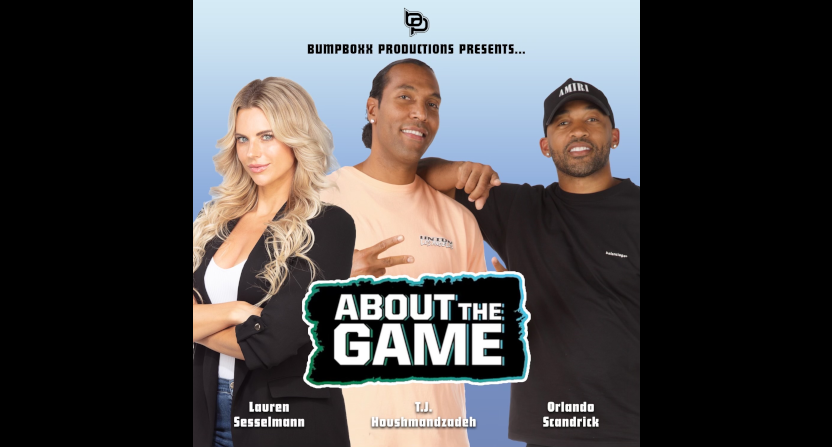 There are plenty of sports podcasts being launched all the time, but it’s been interesting to see the recent increase in former athletes turning to podcasting. The latest there are former NFL players TJ Houshmanzadeh (a former wide receiver who played with the Bengals, Seahawks, Ravens and Raiders from 2001-2011, he’s also spent time in broadcasting, particularly with FS1) and Orlando Scandrick (a former cornerback who played with the Cowboys, Chiefs and Eagles from 2008-2019), who have teamed up with former NWSL and Canadian national soccer team defender Lauren Sesselmann for a new About The Game podcast on the NFL. This podcast plans to feature a lot of other former NFL players, and looks to take ” a deeper dive into the world of professional football and what it really takes to be a professional athlete, agent and executive.” Here’s more on it from a release:

Former NFL stars Orlando Scandrick and TJ Houshmanzadeh are partnering on a new podcast from Bumpboxx Productions, ABOUT THE GAME. Olympic medalist Lauren Sesselmann joins the pair as co-host on the new podcast which will be available on Apple Podcasts, Google Play, Spotify beginning September 8. ABOUT THE GAME will give sports fans an up-close and behind-the-scenes look of the lives of professional athletes, agents, and executives with an emphasis on unfiltered story telling by both Houshmanzadeh and Scandrick and their guests. New episodes will be available every Wednesday.

Eleven-year NFL veteran and broadcaster TJ Houshmanzadeh looks forward to bringing on an all-star roster of guests in ABOUT THE GAME’s inaugural season. “Our season-one guests are some of the biggest names in football including Michael Vick, TJ Ward and David Mulugheta. Fans looking for the real stories about what really goes on in professional sports can look forward to stories told with a fresh, honest and humorous perspective every Wednesday.”

“Having played twelve years in the league, I know what it takes to be successful on the field,” said Orlando Scandrick, who spent a decade as a cornerback for the Dallas Cowboys. “But I also know that what fans see between the lines on Sundays is only a fraction of the story. Football fans might think they know what happens when the game is over, but this podcast is all about telling the unfiltered version of professional sports, and TJ and I can’t wait to bring a different perspective to football fans.”

There’s certainly some name recognition for these hosts, and it’s notable to see a wide receiver and a defensive back team up. Houshmanzadeh and Scandrick also are an interesting pairing because of their different career timelines; between the two of them, they’ve played in every NFL season from 2001-19. We’ll see how this podcast turns out and how it’s received.

[About The Game on Apple Podcasts]