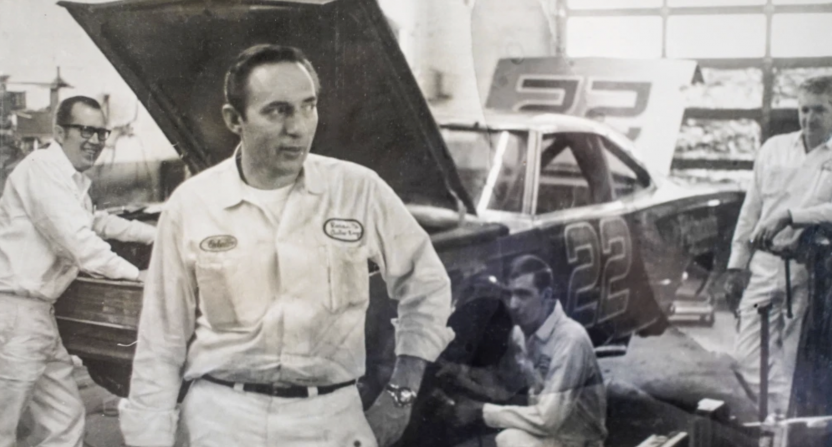 Season 3 of USA Today’s The Sneak podcast centers on the disappearance of NASCAR car owner and crew chief Mario Rossi. Despite being one of the top crew chiefs in the sport throughout the 60s and 70s, not much was known about him.

Some current NASCAR drivers were asked about Rossi on the podcast and had no clue who he was. Though for reasons revealed in the podcast that might not be their fault.

Around New Year’s Day 1983, Rossi’s family received a phone call that Mario died in a plane crash off in the Bahamas at the age of 50. In the phone calls they received, they got a weird vibe from a mysterious woman named “Betty” who warned them to not ask questions or to pursue what happened.

After the family tried to collect on Rossi’s life insurance policy, the insurance company told them that not only did that plane crash not take place, that exact plane was actually resold multiple times over the years. This kickstarted a decades-long search for answers by the Rossi family that eventually involved USA Today.

Binge every episode of our true crime podcast, The Sneak: The Disappearance of Mario Rossi RIGHT HERE: https://t.co/MpjEQjjsNG pic.twitter.com/LFXwX6rkrD

Throughout the eight-episode season, Nate Scott and Michelle Martinelli become part-podcaster, part-journalist, part-private investigator, and part-historian, weaving through this true-crime tale that many seem to want to remain buried in history.

Rossi was involved with a drug smuggling ring in Florida connecting some people in the NASCAR and motorsports community in the late 70s and early 80s. By the time all this was going on, Rossi was a mechanic and crew chief for car owner Billie Harvey and driver Gary Balough, two of the more notable ring leaders in the operation. In fact, Rossi’s final race as a crew chief was for Balough in one of the greatest NASCAR races of all time, the 1979 Daytona 500.

The FBI eventually caught on and infiltrated Harvey’s race shop, gathering info that would eventually lead to a massive bust in February 1982. A few days after Balough and Harvey raced in the Daytona 500, the two of them were charged along with racers Pee Wee Griffin, Pete Pistone (who isn’t the same guy you hear on NASCAR’s radio broadcasts), Herbert Tillman, and 61 others throughout the Southeast in a sting operation called “Black Thursday.”

How Rossi fits into this drug situation is unclear. In some interviews, Rossi was merely an outsider who may have been somewhat aware of what was going on but wasn’t involved in the drug parts. In other interviews, Rossi flew a plane or drove/worked on speedboats and participated in drop-offs as marijuana was transported into the United States. Rossi’s daughter noted that while she didn’t see anything illegal take place right in front of her, she saw scales in Rossi’s South Florida place, indicating that he was weighing drugs in order to be sold.

What is clear is the implication that whatever happened to Rossi had something to do with this drug smuggling operation. Was Rossi murdered? Did he disappear in order to run from the law and avoid being arrested? Did he become an informant for the federal government and was placed in witness protection? Those are common theories as to what happened, which the podcast explores.

Our true crime series is available wherever you get your podcasts. Learn more, catch up on old episodes or listen to the latest ones here: https://t.co/Ax6Z8J2dOr pic.twitter.com/SP3H9xj5gN

What really makes The Sneak a must-listen isn’t so much what was said, but what wasn’t said. Just about everyone involved, even the people in Rossi’s family that wanted USA Today to investigate, were at least somewhat apprehensive to talk about what may have happened to Mario. Some people may have been more comfortable talking about Mario’s on-track accomplishments or his safety innovations and less about his disappearance. Others felt like they rather he never existed in the first place.

This is where NASCAR comes in. While a few members within the NASCAR community were involved in the operation, NASCAR as a sanctioning body certainly wasn’t. Race teams back then were independent contractors, so it’s not like there was anything more than a loose connection. Nevertheless, this isn’t a story NASCAR looks back on with fondness, even though the origins of the sport sound somewhat familiar.

While the product was different, NASCAR got its start when moonshiners got to racing each other on dirt tracks after spending their time escaping the local police. NASCAR has embraced that part of its past to the point where not only is its most well-known moonshiner/racer, Junior Johnson, a charter member of the NASCAR Hall of Fame but a recreation of his moonshine still sits in the Hall of Fame facility.

When it comes to Mario Rossi and Black Thursday, NASCAR isn’t exactly embracing that part of its past. When people look back on NASCAR in the 60s and the great crew chiefs of the era, Rossi isn’t mentioned at all. It’s almost like he also disappeared from NASCAR history.

A new episode of our true crime podcast, The Sneak: The Disappearance of Mario Rossi, is out now. And you're not going to want to miss this one…

I don’t blame NASCAR for this approach. The NFL doesn’t shine a light on its past negligence with concussions and the less said about steroids, the better for MLB. And in those two cases, those leagues had direct involvement. NASCAR is in a sweet spot in the sports hierarchy where it’s not too big and mainstream media isn’t constantly watching every move. At the same time, we’re talking about a multi-billion dollar international sport with millions of fans.

So even when it comes to something like Mario Rossi’s disappearance, something that NASCAR very likely wasn’t involved in, no one will talk about Rossi if they don’t have to.

That being said, NASCAR has softened a bit on discussing Black Thursday and that comes in the form of Gary Balough. After nearly four decades, and several stints in prison, Balough is slowly getting back into NASCAR’s good graces. That included being interviewed by Dale Earnhardt Jr. on The Dale Jr. Download. Talking to The Sneak, Balough revealed he would be attending this year’s Daytona 500 as a guest of NASCAR.

Balough’s interview was a perfect culmination for The Sneak because out of anyone currently alive, he’s probably the best shot at figuring out what exactly happened to Mario Rossi. I won’t spoil what was discussed because it’s worth listening to, but Balough’s interview will certainly raise some suspicions and draw some conclusions.

Even though Michelle Martinelli and Nate Scott originally set out to try and find Mario Rossi, they inadvertently accomplished something else along this process. They made Mario Rossi relevant. Rossi is/was a flawed human being in more ways than one but he is/was a notable personality who helped shape NASCAR to what it is today.

Rossi’s safety innovations, like a three-point seat belt and the headrest, helped save lives and that alone is worth some sort of place within NASCAR history. The Sneak might not result in NASCAR putting Mario Rossi in the Hall of Fame but maybe fans (and even the drivers) will learn more about who he is/was and maybe look into other NASCAR stories and personalities that are in danger of being lost in history.

All eight episodes of The Sneak are available at For The Win and to download wherever you get your podcasts.