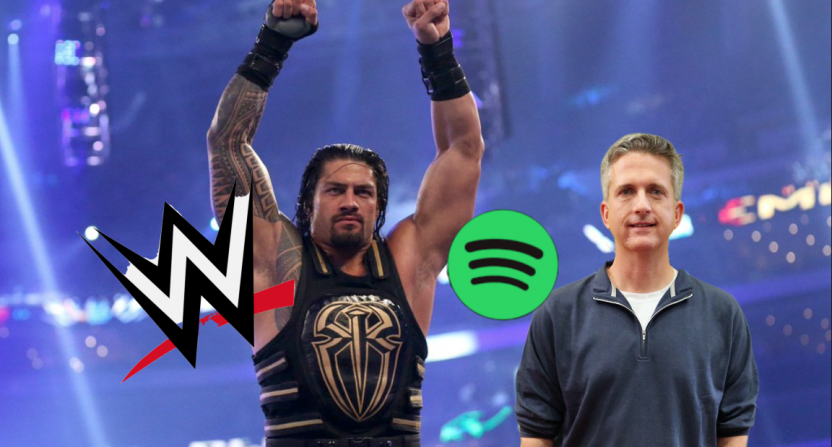 WWE and The Ringer are partnering up to create an exclusive audio network for Spotify. Under the multi-year agreement, The Ringer and WWE will create original podcasts for Spotify and the Ringer website. Spotify will also become the exclusive home of WWE’s previously produced audio programming.

The new partnership will also boost wrestling coverage at The Ringer. David Shoemaker and Kaz’s The Masked Man Show podcast will be rebranded as The Ringer Wrestling Show (on the same feed), and new podcasts will feature WWE personalities. Evan Mack, who’s been a production assistant and on-air personality for WWE since 2019, will host a podcast titled MackMania. Upcoming programming will also include a narrative series produced by Ringer founder Bill Simmons.

WWE’s deal with The Ringer will officially launch this Saturday, Aug. 21, at SummerSlam in Las Vegas with The Ringer Wrestling Show on-site for all-new episodes and Mack making his Ringer debut. Additionally, Spotify Greenroom (the platform’s Clubhouse-like social app) will feature live sessions, something that will also be offered after every subsequent WWE pay-per-view event. (Those sessions will also be available as content for The Ringer Wrestling Show.)

This is all leading to Curtis kicking Shoemaker through a plate glass window on the @thepressboxpod https://t.co/ojbooOiObt

SummerSlam will stream live on Peacock and WWE Network beginning with the event’s kickoff show at 7 p.m. ET Aug. 21.

Simmons has previously indulged his creative interest in pro wrestling by producing the Andre the Giant documentary for HBO, the first project in his deal with the premium cable network that also yielded the recent Woodstock ’99 film, part of the “Music Box” documentary series.

Related: HBO’s Andre The Giant is a nostalgic home run that leaves us wanting more

“The Ringer is the premier destination for sports fandom, and WWE has used amazing storytelling and iconic characters to establish a global audience of loyal and passionate fans, making this partnership a perfect match,” Simmons said in the official release announcing the Ringer-WWE deal.

“As a lifelong WWE fan, I couldn’t be more excited to work with them to take a fresh perspective on their most iconic moments and superstars, and leverage Spotify’s global scale to share content that we believe everyone will enjoy.”

WWE’s previously produced original podcasts that will now move to Spotify include The New Day: Feel the Power, After the Bell with Corey Graves, and Uncool with Alexa Bliss.