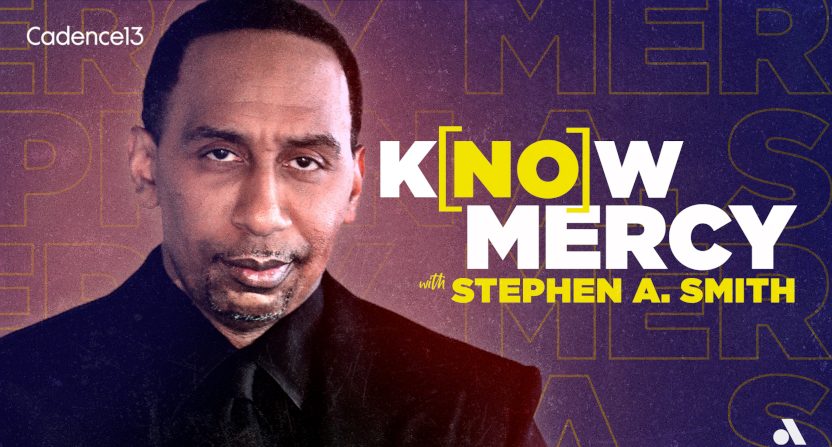 A fascinating element of Stephen A. Smith’s bifurcation into “sports” (ESPN) and “cultural topics and social issues” (the Know Mercy podcast with Audacy’s Cadence13) is the question of what happens when a topic of discussion legitimately hits both of those categories. The latest example there is with the discussion around antisemitic comments from Kanye West (or “Ye” now) and antisemitic link promotion from Kyrie Irving.

Smith’s current approach seems to be to cover that in both of his arenas, focusing on more specific sports figure Irving (although West has his own sports ties) at ESPN and on more “cultural and social” figure West with Know Mercy. On Wednesday, he went off on Irving on ESPN’s First Take. He also offered his latest discussion of West in the latest episode of Know Mercy, which was released Wednesday. Those comments followed up on Smith’s previous comments on West on Oct. 31, Oct. 22, and Oct. 10 Know Mercy episodes. Here’s the key part of what Smith said about West in Wednesday’s episode, and specifically about West’s seemingly-supportive Monday morning Instagram post on him (which came out after Smith recorded Monday’s Know Mercy, but before it was published) and its placement next to similar posts on Irving and Walker. (Transcription provided by Know Mercy/Cadence13):

“Do y’all realize that over the last week, Kanye West and Kyrie Irving have made more news–or just as much news–as…this guy David DePape that terrorized the Pelosi home and hospitalized the husband of Nancy Pelosi. Kanye West made news for what many deemed to be his antisemitic remarks and then for some reason, I don’t know what the hell this was about, he actually put me there in the mix, sat up there and talked about real ones like me.

He put me in the same sentence as Herschel Walker, who’s running for the Senate seat in Georgia, and Kyrie Irving. Ladies and gentlemen, I’m not gonna disrespect anybody. Let me just say to you, that couldn’t be further from the truth.

I met Kanye one time in my life, don’t know him, don’t know Herschel Walker. And after last season, the way Kyrie Irving and I went at it, we’ll never speak again. And I won’t lose a speck of sleep over it. I wish him no harm, I wish him nothing but the best. But I am not in the same boat as them. Let me be very, very clear.

I am against antisemitism. I don’t applaud it. I don’t condone it. I don’t okay it. I have nothing to do with it. There are too many people in the Jewish community that I know and respect to ever disrespect them like that. And I’ve repeatedly told y’all this on many, many occasions. If I’m not Jewish, I don’t get to define what antisemitism is. They get to do that. Just like I don’t want somebody coming to me telling me what I should find offensive as a Black man. It’s not my place.

And I certainly don’t get into people’s religion. I believe in God. I’m a Christian. I grew up around Muslims. My brother believed in Buddhism. My cousins were Muslim. And yes, because my grandmother was white, I have aunts who are Jewish. I don’t play those games. God will determine when all is said and done. I know what I believe in. I don’t feel the need to try and educate you on what your beliefs should be. I’m not a pastor, I’m not a rabbi, I’m not an imam. I’m none of that. I don’t know. And I leave that to others. So I don’t know what the hell Kanye was thinking, mentioning me in the same breath..[with]… that stuff. Wrong brother. Must be another Stephen A. Smith out there that I didn’t know about. But it ain’t me.

Kyrie Irving. It’s Kyrie Irving. It’s no surprise I’ve said it on many occasions and I’m not here to hate on him, but he believes that his level of intellect far exceeds most others. Okay? I’m just gonna leave it at that. That’s what he believes, okay? And he’s going to double down and not back down or whatever. All I’m gonna say is this, same thing I just said about Kanye West. People have their beliefs. When judgment day comes, they will find out whether they’re right or wrong. It’s not for us to determine that for them. And when you try to do that, you’re stepping over lines, you have no business stepping over. Period. But that’s his own bed, he’s got to lie in it.”

The “I am not in the same boat” comment is perhaps obvious considering how different Smith’s comments have been from those made by Irving and Walker. And a boat with those two would seem rather Titanic-esque at the moment. But it’s still notable to have Smith on the record about that.

It’s also fascinating to hear Smith talk about his limited personal interactions with Irving and how ‘We’ll never speak again. And I won’t lose a speck of sleep over it.’ Smith is primarily an analyst these days rather than a reporter (and his attempts to be “A REPORTER” have not always gone well). But he definitely still communicates with people in the NBA and NFL worlds, and sometimes relays their perspectives on air. So it’s interesting to see him say he does not regularly talk to Irving and has no plans to talk to him in future.

The third perhaps-interesting takeaway from this is Smith’s continued ability to address many actually-controversial (not the much lower bar of sports-controversial) topics without actually being terribly controversial. Early in his career, he was not always good at that, and that’s part of the “I was just a pain in the ass” remarks he made reflecting on his 2009 ESPN exit this September. He said there that “And when I didn’t earn that trust, they were like ‘Wait a minute now, you work for us, not just for yourself, and we have to protect our brand.'”

Since then, Smith has become much better at protecting both his own brand and the brands of his employers. He still finds his way into sports controversies, and he does occasionally step over a line, and does sometimes (but not always) get punished for that. But for someone offering fiery opinions over an incredible tonnage of TV/radio/podcasting hours, Smith doesn’t actually create as much serious blowback these days as you might expect. And that shows his growth and evolution since that first ESPN stint.

And many of the most controversial exchanges Smith been involved with outside sports have been more notable for what the other person has said. This distancing of himself from West, Irving, and Walker fits right into that model. He’s not particularly condemning any of them in these specific remarks (he has blasted West and Irving a bit elsewhere), but he’s making it clear that he doesn’t like being lumped into that group of people. And his remarks to date fit that; the only person actually linking them is West with these Instagram posts, and Smith’s full “I am against antisemitism. I don’t applaud it. I don’t condone it. I don’t okay it. I have nothing to do with it” remarks here make it pretty clear he’s not defending what Irving or West are currently saying. That’s smart on his part, and it fits with how while he’s still stirring up sports controversies, he isn’t creating many outside that realm at the moment.