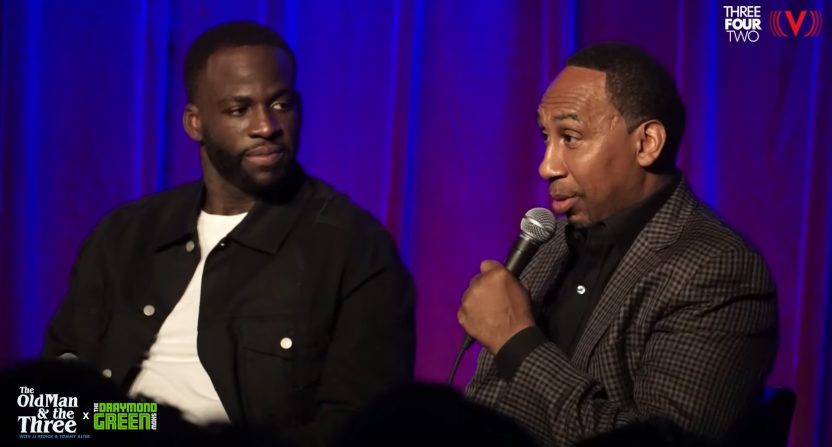 Instead of new media vs old media, Stephen A. Smith, Draymond Green, and JJ Redick may soon join forces to launch one giant crusade against the aggregate media.

Green and Redick combined their podcasts for a live show from City Winery in New York earlier this week and they were joined by Smith for about 20 minutes. But before leaving the stage, Smith took a minute to warn Green and Redick about the big bad aggregate media coming to misquote them.

“I don’t believe you really experienced this part yet,” Smith told Green. “See JJ got a taste of this, to be misquoted, completely taken out of context. Like, new media, I’m laughing when you say this sometimes, and it’s not that you’re wrong. It’s like, ‘he has no idea what is coming.’ Think about how this man talks now.”

I’d like to take a brief pause just to reiterate that Smith’s made these comments during The Draymond Green Show/Old Man and the Three combo podcast. I don’t want Redick coming after us for not properly crediting their podcasts.

“They got something about me on social media where ‘JJ Redick said this, and he put Stephen A. in his place about this!’ JJ Redick was on SportsCenter talking to Sage Steele. I was nowhere in the vicinity, the conversation never happened, nothing!” Smith claimed. “But they used my name for clicks!”

Are we supposed to believe Stephen A. Smith never used Kyrie Irving’s name for clicks?

Last week, Redick railed against aggregate media platforms, calling it “the worst kind of media,” paying specific attention to Bleacher Report and ClutchPoints. Apparently, Smith isn’t too fond of us aggregators either.

One day I’ll tell Smith and Redick a story about Mike Francesa banning people from posting audio and video from his WFAN show on social media. But once he came to the seemingly obvious realization that he was actually benefiting from a source of free advertising, promotion, and exposure, Francesa lifted the ban after just three weeks.

“JJ comes into First Take whining,” Smith continued. “That’s right I said it, whining a couple of weeks ago, ‘that’s not the question and that’s not what I said.’ I said, ‘welcome to my world’ and that’s what y’all are in for.”

If you want to push back on someone if they misquote you, I get it. But don’t act like you’re not a floozy for the clicks and social media attention, regardless of whether that attention is sparked by a post from ESPN, Awful Announcing, Bleacher Report, or ClutchPoints.

[The Draymond Green Show, Old Man and the Three]