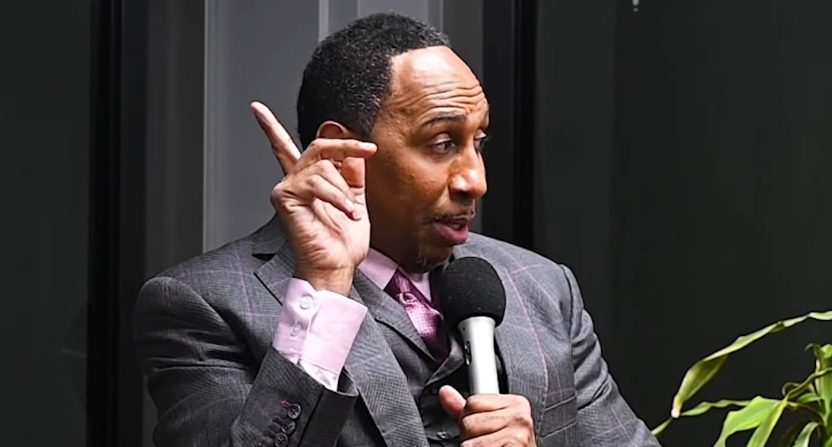 Stephen A. Smith speaks as brazenly and unapologetically as any sports media personality every day on ESPN, but not without the fear of getting canceled.

On his latest podcast episode of Know Mercy for Cadence13, Smith addressed Dave Chappelle’s recent Saturday Night Live performance. In the wake of Chappelle’s monologue, the comedian has been criticized by the Anti-Defamation League for his jokes in reference to Kanye West and Kyrie Irving’s antisemitic controversies.

As he strongly defended Chappelle from criticism and threats of being “canceled” by imploring people to judge the comedian’s intent, Smith shared his own fears of saying something that will garner public outcry.

“We keep finding a reason to ostracize folks,” Smith says around the 38-minute mark of the above podcast. “And on a personal level, make no mistake about it, I wake up every day feeling I’m next. Ladies and gentlemen, I’m on live television 10 hours a week, minimum, live. No seven-second delay, no tape delay, no anything. The only thing that I’ve ever taped is this podcast. Everything else is live! I slip up, I’m toast! You think people don’t know that? Which is why they try to get at me in the ways that they do on social media or beyond.”

Smith revisited an incident from 2005 when he was covering the NBA Finals for ESPN. According to Smith, he received news of a family emergency minutes before conducting a live hit SportsCenter hit. During the segment, a crowd of San Antonio Spurs fans were behind him chanting “Stephen A. sucks” because he picked against them in the series. When the segment was over, Smith turned to the crowd and gave them the finger.

“It was a fireable offense,” Smith admitted.

Standing five feet away was then ESPN president George Bodenheimer, who was aware of the news Smith received shortly before his SportsCenter segment. Instead of punishing or firing him for giving Spurs fans the finger, Bodenheimer sent Smith home to be with his family.

“Back in the day it was a foregone conclusion that the benefit of doubt would come your way,” Smith explained. “In this day and age, folks don’t care. They’re trying to eliminate your resume, your reputation, your credibility with one mistake.”

Cancel culture is often used by notable people who are facing consequences for self-inflicted wounds and desperately trying to play the victim rather than addressing the controversy they caused. As Smith noted, he speaks live and offhand on-air for a minimum of 10 hours every week. And Smith would also admit he’s made mistakes on-air, yet he remains employed by ESPN and continues to grow his personal brand.

In 2014, Smith served his one and only suspension from ESPN after suggesting some women provoke domestic violence. One year later, Smith made an ignorant joke claiming female soccer players didn’t want to mess up their hair. Last year, Smith was also forced to apologize after stating Shohei Ohtani can’t be the face of baseball because he uses an interpreter during interviews.

Any one of those controversies could have cost Smith his job if he chose to dig in, deny wrongdoing and blamed “cancel culture” for getting himself in hot water. While everyone rightfully called Smith out for the above ignorant comments, he avoided serious retribution by taking responsibility for his mistakes. But if “cancel culture” really was out to get everyone famous who speaks brashly and boldly, Smith probably wouldn’t be at ESPN anymore.