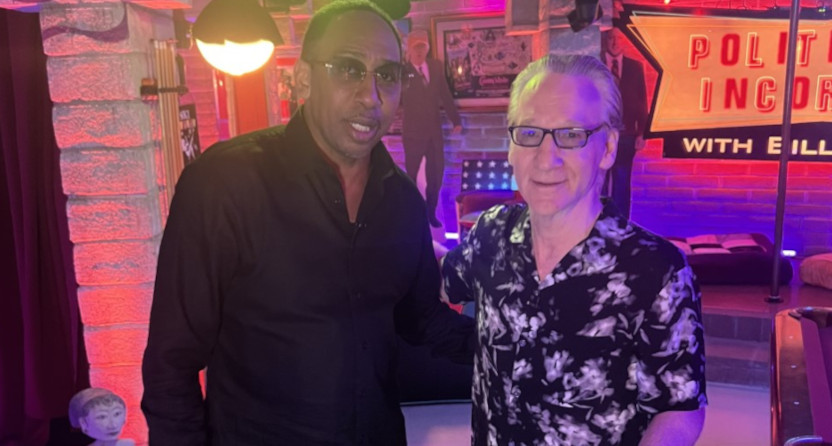 ESPN (and Audacy) pundit Stephen A. Smith is known for intensity on many fronts, and some of that intensity was shown in his past comments about Brooklyn Nets’ star Kyrie Irving refusing to get vaccinated against COVID-19 at a point when that was required for him to play at home. In the latest episode of Bill Maher’s Club Random podcast, though, Smith discusses that situation again, and he has some interesting comments. He reveals he was “very reluctant” to get vaccinated himself, says his criticisms of Irving were about Irving abandoning a leadership role, and says his own bout with COVID-19 last December “almost killed me.”

The full episode here is an hour and 42 minutes, and there’s quite a bit in it. That includes Smith and Maher (seen above around the recording of this) discussing LL Cool J and ‘thickness’ in women (starting around 2:15), with Smith saying at one point “I’m not going to deny I do like a big booty, I’m not going to lie about that…It’s almost mandatory for me personally.” (Add that to the list about how much we know about Smith’s personal life.)  Amongst other things, it also includes discussion of hockey (21:30, Stephen A. says “Only thing I know about hockey is that the puck is black,”), Bob Costas and steroids in baseball (24:00), and covering the Olympics (49:00, Stephen A. says “It’s a nightmare, because I didn’t have the television, right, so I’m sitting 20 minutes away, 20 feet away from the athletes with a tape recorder, sticking my arm out trying to ask a question. I’m never going back.”) But the most notable thing here may be the vaccine discussion, which starts around 8:20.

Maher starts with “I don’t know what you thought of the athletes who didn’t want to get vaccinated, and I don’t want to get into a big fight about it, because I will. But I was on their side. Because health is a case-by-case basis, and when you’re a finely-tuned athlete with a body that is perfect, because that’s your living, you put in that body only what you want to put on to keep that instrument, that is your instrument. The idea that Djokovic was going to hurt anybody, or Aaron Rodgers, or, oh my gosh, Kyrie Irving, I mean, clutch
my pearls. I thought ‘Bully for you guys for standing,’ especially Kyrie Irving, because he gave up a lot of money, although he’ll get it back, because he can play now right?”

Smith agrees that Irving can play now, and then says around 9:45 “Let me be very clear. I don’t disagree with you. …Yeah, it’s your body, and somebody is trying to tell you what to inject into your body. I didn’t like it, I was very reluctant and hesitant about getting vaccinated. But obviously it’s made very clear you know, you want to work here in these corridors, you need to do this right?” He then goes on to talk about Irving specifically.

“Here’s where I held it against Kyrie. It had nothing to do with being vaccinated or being unvaccinated, in my mind. What bothered me is that you are a superstar on a team that is a championship contender, and everybody is there because of you. Kevin Durant is in Brooklyn because of you. James [Harden] at the time was in Brooklyn because of you. Everybody’s there…” Maher objects with “It’s still his body,” and Smith says “All I’m saying is it’s your right, but I’m thinking about it from a competitive perspective. A lot of dudes in the NBA didn’t want to do it. But you’re playing for a championship.”

Maher then says shortly afterwards “There’s no going back from your body. It’s your body. It’s inside your body. And look, if I really thought, first of all everything in medicine is playing the odds. Because we just don’t know that much. Even though they think they do. So since we’re playing the odds, I played them with this vaccine. Because nobody can realistically look you in the eye and say we are a million percent sure there’s just no doubt that no harm can come, and I’m talking about down the road.”

“…Some people it does have an effect on, it does weird things. Most people, it doesn’t, okay, that’s fine. If I didn’t think, if I thought it was like really deleterious and my body couldn’t withstand it, or 20 years from now my gallbladder’s going to fall out of my ass because of this, I wouldn’t have done it. But you can’t ever tell me that there’s not some chance of that. And especially the
down the road stuff.”

He goes on with that:

Smith responds by saying Maher isn’t fully researching this, and the championship element was important for Irving. He then gets to the really notable part, where he speaks in detail about his own battle with COVID. In December, he revealed on-air he had COVID, but cited only mild symptoms at that time, and said he was feeling good enough to go on-air and roast the Nets for their decision to let Irving play road games. In January, though, Smith talked about winding up in the hospital over New Year’s thanks to COVID, and this is what he said then:

“[Doctors] told me, had I not been vaccinated, I wouldn’t be here. That’s how bad I was. I had pneumonia in both lungs. My liver was bad, and it ravaged me to the point where even now I have to monitor my volume, get to the gym every day. I’m still not 100% with my lungs, but I’m COVID-19 negative … I’m on the road to recovery.”

With Maher (14:00), Smith goes into even more detail about how scary that was for him, and says athletes take all sorts of painkillers and other shots:

“I had COVID. I was double vaccinated, I hadn’t taken the booster shot yet. Damn thing almost killed me because I had an endoscopy prior to acquiring COVID. I had double pneumonia, I’m in the hospital New Year’s Eve, it’s 90 minutes before the ball drop and the doctor’s looking at me and saying, ‘We’re going to try this steroid with this antibiotic. If this doesn’t work, we’re going to have to call your family, we’re probably going to have to put you on a respirator, you’re in pretty damn bad shape.’ It was that bad. OK? So I understand where everybody’s coming from and I get all of that, but I also say this to you. When it comes to professional athletes, you know how much stuff gets put in their body that they have no damn clue whatsoever what it is?”

Maher pushes back and says the likes of Aaron Rodgers and Tom Brady “don’t put anything in their bodies,” and Smith sort of agrees, and they debate second and third opinions a bit. Then Maher says “Well, obviously, it didn’t work on you,” and Smith’s eventual comments there are a little ambivalent:

“I’m acknowledging I don’t know. But what I’m saying is is that I don’t know and yet I’m here in this situation. On one hand they’re telling me, because I was vaccinated, that’s why I’m alive. And in my mind, a part of me is saying, but dammit, I was double vaccinated, should have never got the damn thing.”

And Maher goes from there:

“And certainly you should not have gotten it bad. So it’s so self-serving and it’s so in the bubble. Like we’re not going to examine what the other possibility is, we’re just going to keep doubling down on our story which is the vaccine is the only way for everyone, no questions asked. So if you get a horrible case, it would have been worse without it. Maybe.”

None of this is Smith firmly going against vaccines, or even changing his mind on his Irving criticisms. The much stronger vaccine-critical comments here come from Maher (so be careful, aggregators). And it should be noted that Smith’s specific comments often change a bit depending on the format he’s in and who he’s talking to.

On First Take, Smith was more confrontational about Irving than Rodgers because of disagreement from his debate opponents. Here, he’s being an interviewee rather than a host or a full debater. So he’s offering more agreement and consensus on the areas where he and Maher do overlap rather than focusing on where they still differ.

[Club Random with Bill Maher on Apple Podcasts and YouTube]