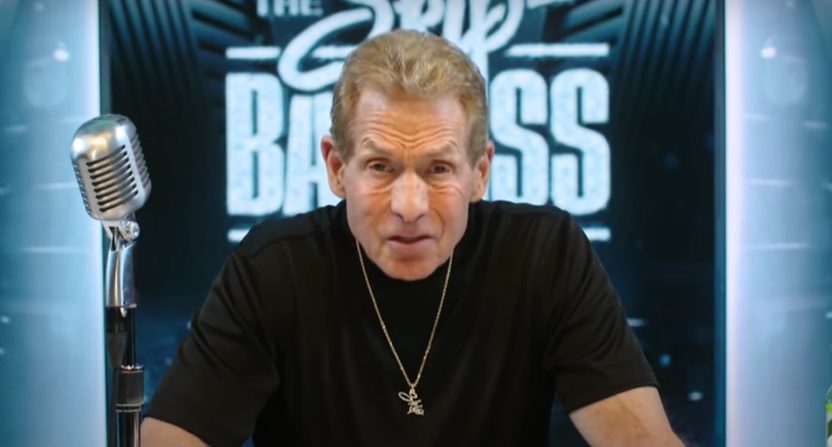 Skip Bayless has little humility when it comes to assessing who the best debater in sports media is, often giving himself the nod. Recently, on The Skip Bayless Show, the Fox Sports host broke down what makes him the “Godfather of Debate.”

In 2014, Bayless claimed he “never lost a debate.” I haven’t seen an updated record for the Undisputed host, but I can’t imagine he’s figured himself to have many or any tallies in the loss column since his 2014 declaration. Why does Bayless believe he’s so good? It’s his psycho competitiveness and willingness to scream.

On his podcast, Bayless went through his TV career, beginning with joining ESPN’s The Sports Reporters in 1989. According to Bayless, the show was more discussion than debate and the door was open for him to win any argument.

“The truth was, a lot of the journalists I came up with, most of them white, they looked down upon, they thought it was beneath the dignity of a journalist to raise his voice on television,” Bayless said. “It was ungentlemanly to raise your voice on television, but I didn’t care because I loved that. That was me. That’s how I like to operate, I liked to do what I had done my whole life with my friends – argue about sports. I felt like I was good at it.”

.@RealSkipBayless reacts to being called “The Godfather of Debate" pic.twitter.com/wuajYCtSEM

Bayless listed all of the TV shows he was featured on over the last 33 years of his media career, explaining how his personality fit the format transition from discussion to debate, leading to the creation of ESPN’s First Take and eventually Fox Sports’ Undisputed.

“I live for this. I love hard, I fight harder,” Bayless said. “I just love to fight on live TV. It makes me happy, it makes me happy to win. I am psychic competitive…so in the end I guess it did all start with me and my psycho-ness that I was the one journalist who said, ‘yeah, I’ll raise my voice on TV, I’ll yell and scream if I have to and I’ll win every single debate, hence I guess you could say, Godfather of Debate.”

If the definition of best sports debater is indeed the person who raises the voice the most and loudest, then Bayless is entirely correct, he is the Godfather of Debate. But please, for the sanity of sports programming on TV, radio, social media, podcasts and any other platform, let this not be the determining factor in who wins a debate.

I can enjoy when a host raises their voice to exude passion about a topic that’s important to him or her, and I have a ton of respect for the energy Bayless brings to Fox Sports on a daily basis at the age of 70. But in no way should aspiring sports talkers believe the way to win a debate is by attempting to out scream your opponent.