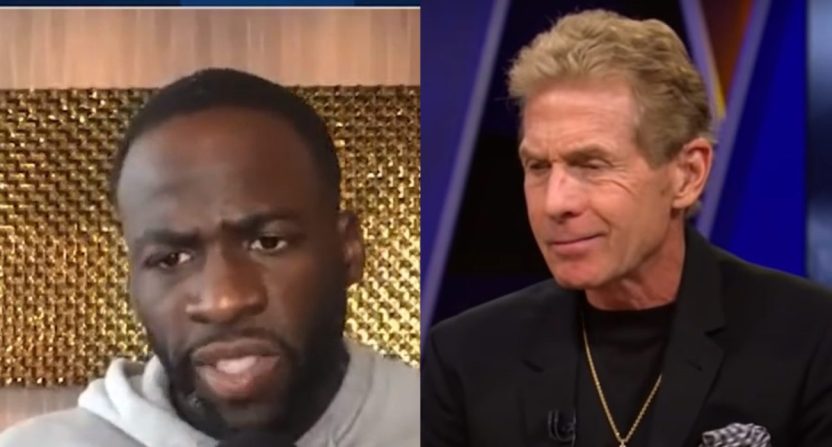 The offer is officially on the table, Skip Bayless is willing to face Draymond Green in a war of words or a three-point shooting contest. The decision is Green’s.

Personally, I’m hoping to see the 32-year-old four-time NBA champion take on a 70-year-old hot take artist in a three-point contest. I’ll settle for a war of words, but realistically, it seems more likely that Green will just fire back on his podcast, continuing this empty back-and-forth of jabs.

After Green took the latest shot on his podcast last week, claiming the Fox Sports host has had his career saved multiple times by Stephen A. Smith and Shannon Sharpe, Bayless responded with a tweet, challenging the Golden State Warriors forward to a debate duel. And Bayless doubled down on his offer in his latest podcast episode, daring Green to accept the challenge.

“You play basketball, Draymond, I did not play past high school,” Bayless continued as he was about to display a true lack of self-awareness. “Though, I’m pretty sure I’m a better three-point shooter than you are, even now. Let’s talk some hardcore hoops, how bout it, Draymond? Or heck, you’re new media, let’s talk National Football League! Let’s talk whatever, whenever, however, you call it, I’ll be there. I’m talking about real talk, Draymond, not this fake tough guy bluster of yours. I’m not running, I’m daring. Draymond, I honestly think you’re afraid to face me. So prove me wrong.”

New media vs old media has already taken some strange and unexpected twists since Green launched his crusade against older journalists about two months ago. It would only be fitting if it somehow ends in a three-point shooting contest between Bayless and Green.