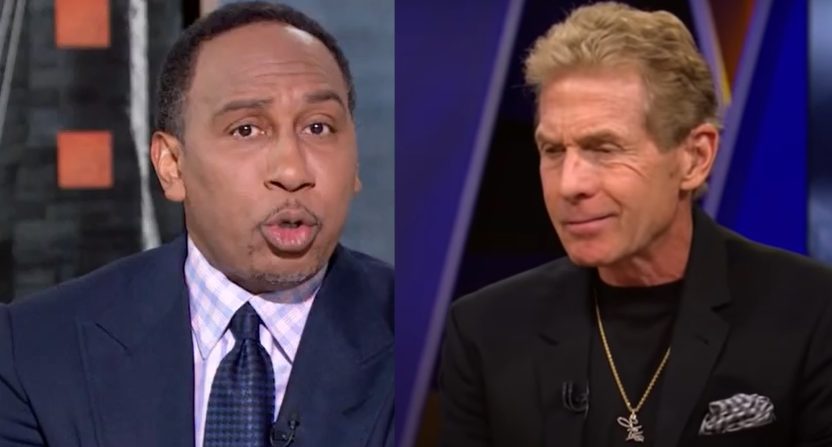 It’s been almost exactly six years since we had a Stephen A. Smith vs Skip Bayless debate, but the peace streak is officially over as they appear to have a doozy of a discrepancy regarding the history of First Take.

Last week, Smith appeared on The Old Man and the Three podcast hosted by JJ Redick and Tommy Alter. And among his many headline-worthy comments on the podcast, Smith discussed the history of First Take and how he was recruited to partner with Bayless on the show. As Smith recalls, his addition to First Take essentially saved the show.

“Skip Bayless was doing his thing with First Take, having the 2 Live Stews [Ryan and Doug Stewart], Jemele Hill, Rob Parker, and various other people debating against him,” Smith said on Redick’s podcast. “And then in 2012, they weren’t satisfied with the numbers — the ratings and the amount of revenue that was being generated.”

“WHAT?!” Bayless said on the most recent episode of his podcast for Fox Sports. “I cannot tell you how wrong that was. It was so recklessly inaccurate. It was such shocking fabrication.”

But Smith’s narrative didn’t stop there, he claimed Bayless begged him to join First Take because the show was stalling.

“Skip Bayless comes to me in the parking lot of ESPN’s campus in Bristol, Connecticut,” Smith continued. “And he says, ‘I know you’ve got your plans. You love the NBA. You love being out on the road. You love being in the locker room. But I need you. I’ve done all that I could to take this as far as it can go. I need you, please. Just give me three years. I think we’ll knock it out of the park.’”

Bayless appeared distraught as he read the quotes from Smith aloud on his own podcast. Since departing First Take to launch Undisputed on Fox Sports in 2016, Bayless has repeatedly noted the great relationship he maintains with Smith. That friendship seemed to enhance Skip’s feeling of betrayal by his former debate partner.

“I thought, ‘how could my brother Stephen A. turn on me like that?’ On me? Seriously?” Bayless said with a sigh of disappointment. “Stephen A. was suggesting that he saved and then made First Take. How can you save and make a show that was already as big a billion-to-one success story as ESPN had ever seen? The ratings and the revenues were impossibly great when Stephen A. joined me in 2012.

“With Stephen A. as my partner, First Take would never touch the NFL Monday ratings that it hit in 2011 pre-Stephen A. And I had taken First Take as far as I could? Seriously? I was just getting started. The rocket had just launched the year before in 2011.”

First Take has surpassed the ratings it achieved with Bayless, but that was aided by the decision to move the show from ESPN2 to ESPN in 2017, just six months after Bayless left for Fox Sports. Smith doesn’t even host the show on days when First Take is preempted on ESPN, subsequently bumping it back to ESPN2.

“Stephen A., how dare you,” Bayless said dejectedly.

There’s little surprise here. Smith wants credit for First Take’s success, with Bayless sitting at Fox Sports arguing that he’s the one who deserves credit for ESPN’s late morning show. These are two people who over the course of four years together on First Take, debated thousands of topics. And both, to this day, believe they never lost one of those debates. Not one. So why should either of them depict humility and pass credit off to the other now?