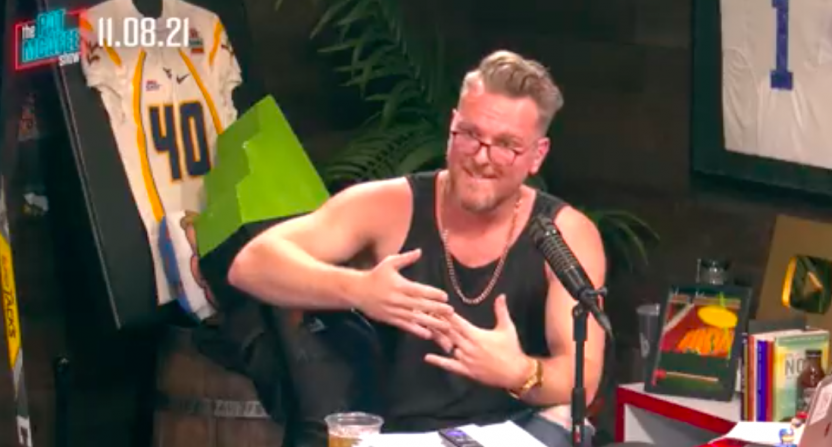 On Friday, Aaron Rodgers broke his silence about not being vaccinated for COVID-19 on The Pat McAfee Show. The platform made a lot of sense for the Green Bay Packers quarterback as McAfee offered him a safe space to basically go unchallenged as he went on a 20-minute diatribe about the woke mob, vaccine mandates, being a critical thinker, and letting the world know he relies on Joe Rogan for medical advice.

Of course, Rodgers having an open floor to share all of his insights into medicine and science also opened him up to a lot of criticism in the days since. He was skewered on Saturday Night Live, called out by many folks in the NFL media, including the national pregame crews on Sunday, and ended up losing one of his longstanding sponsorships.

As for McAfee, he faced a lot of criticism for offering Rodgers a platform without challenging many of the opinions offered up that were at odds with science and data. On Monday, McAfee talked about the reactions to the interview and why he doesn’t think anyone should have expected him to do so.

I am incredibly humbled & honored that everybody thought I was gonna be the guy to put @AaronRodgers12's feet to the fire#PMSOverreactionMonday #PatMcAfeeShowLIVE pic.twitter.com/7q7JfaD2pO

“Overall positive. Lotta negative. And I do apologize for potentially not hammering home the science and stats like I should have, I guess a lot of people were saying,” said McAfee. “But also, there’s no way you were thinking that’s what I was gonna do. Like there’s no way anybody had that as the expectation.

“And I appreciate and respect everybody afterward, you know, thinking that is what I can do. And for that I am humbled. I am incredibly humbled that you can look at that screen and you can see what I do…and if you immediately thought ‘hey, this guy f***ing knows the ins and outs of the COVID situation.’ This is the only guy… If you thought that, I am incredibly humbled, honored, and I promise at some point in my life I will work to become that person.

“So to those people, thank you for the incredible honor of thinking that is something I’d be able to do. I apologize, I’m not. But once again, your peers were in the room when he said ‘I’m immunized’ and just let it fly in the middle of the entire thing.

“So I would just like potentially a little bit of fair treatment as all us journalists have.”

On one hand, it’s a fair critique of himself and of critics that McAfee would be able to immediately start rattling off scientific facts and vaccine information to push back on Rodgers. And he’s right, Rodgers basically dared reporters to question his “immunized” comment back in August and no one did for months, at least publicly.

On the other hand, however, it’s still a bit of a cop-out. Rodgers was speaking about COVID and his vaccination status for the first time, quite potentially the only time, until he returns from quarantine this weekend, and clearly came armed with prepared statements and big ideas he wanted to get across. You only have to look around the media landscape to see how big this was always going to be. This was a “meet the moment” event for McAfee and to simply shrug and offer Rodgers a platform without much pushback felt like he backed away from the opportunity for the sake of his relationship with the quarterback.

McAfee includes himself as a “journalist” in his comments here but there wasn’t really anything journalistic about the interview. And that’s fine. We have a sea full of podcasters and bloggers and writers who aren’t journalists, but you also don’t get to call yourself one just because you offer a big platform.

McAfee also talked about the moment when he knew the appearance was going to go from news to major news.

As soon as Aaron mentioned Joe Rogan you knew it was gonna go BANANAS#PMSOverreactionMonday #PatMcAfeeShowLive pic.twitter.com/dxfwg8catv

“There were a couple of parts of that conversation that people were leaving out whenever they were judging the entire conversation,” said McAfee. “Like him saying about his medical team that he had, and then also following up to potentially chat with Joe Rogan as a consultant and they latched onto that.

“But I knew while Aaron said Joe Rogan, I knew immediately upon him saying Joe- cause in my head I was actually thinking this sounds like a guy who has a lot of money, a lot of access to a lot of things, lot of research is probably being done, this kinda sounds from the same angle…and I thought to myself ‘If he says Joe Rogan’s name, this is gonna be big.” The mere mention of Joe Rogan’s name…it goes.

“Now, he chooses for that to happen. He dives right into the politics world. But as somebody who observes, reports, lives on the internet, in my head I’m thinking to myself, actually, people saw it, if he says Rogan’s name right now, the whole place is gonna go bananas. It was half a beat later, ‘I uh even got a chance to chat with my now-friend Joe Rogan,’ I almost lost it.”

Sure enough, plenty of people caught that moment in real-time and enjoyed McAfee’s reaction.

McAfee’s reaction when Aaron Rodgers brought up Joe Rogan is killing me pic.twitter.com/XLxPGV8knM

Rodgers normally shows up on McAfee’s show every Tuesday to talk about the upcoming game and the week in football news. No word yet on whether or not that will happen given the impact of his interview on Friday.

But either way, McAfee has certainly created a space that makes an impact in the world of sports, whether he’s offering hard-hitting questions or not. And he certainly doesn’t have to if he doesn’t want to. But there’s also a flip side to that when you have exclusive access to one of the most sought-after interview subjects that particular week.