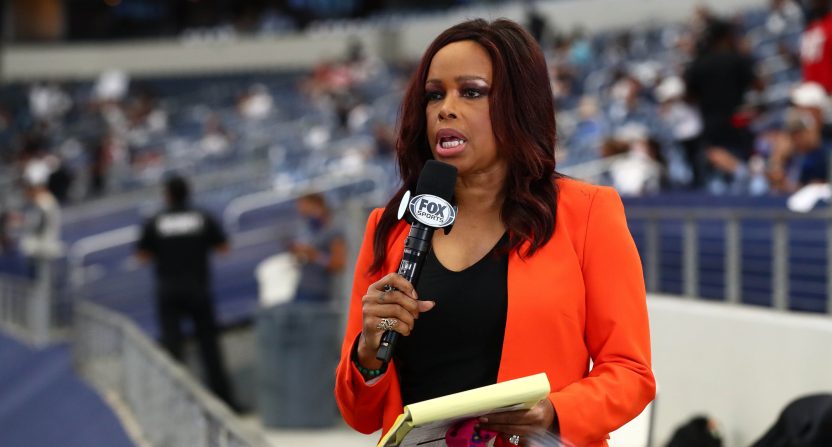 Pam Oliver has been patrolling the sidelines of NFL games since the early 90s, originally for ESPN but eventually moving to Fox where she’s been since 1995. Along with her regular-season work, she’s worked as a feature reporter, show anchor, and been a part of Fox’s coverage of eight Super Bowls. All the while she’s been recognized as a trailblazer for women in sports media.

And she’s done all of that while dealing with chronic migraines and headaches that have sometimes affected her ability to work during games. This past

She’ll be working this weekend as part of Fox’s coverage of the Atlanta Falcons – Dallas Cowboys game, but first, she stopped by The Athletic’s Sports Media with Richard Deitsch podcast to talk about a myriad of topics, including her career in sports media, working alongside Kevin Burkhardt and Greg Olsen, how she tries to help young women coming up in the business, and how she deals with the health issues that she’s suffered with for decades.

When it comes to how she tries to be a positive force for other women in the industry, especially those just starting out, Oliver tries to go the extra mile and offer personal connection, even though she’s wary about being labeled a “mentor.”

“I don’t just try to have these passing moments,” said Oliver. “I give them my phone number or my email, just so they can have access to me in a way that I can answer their burning questions, or…they can feel like ‘she really cares.” These young women are just curious and want to know what this business is like, how they can get in it, how they can succeed, how they can last. And I’m really, really encouraged by the group of women that I keep running into. They are hungry, they are determined, they don’t necessarily want to be in that celebrity class, and they’re not internet stars.

“The mentorship thing I’m very selective in. Just because I met you once doesn’t make me your mentor. But I am here to give you advice. But that doesn’t mean I’m your personal mentor. I’m here to do whatever I can do to help you succeed or answer your questions because I didn’t have that when I was coming up. I didn’t have someone in my chosen profession that I could call up and say hey, help me understand this.”

As for how she was able to break in on her own, Oliver came up the regular news route at local TV stations until she arrived at WTVT in Tampa. That’s where a specific incident involving the Tampa Bay Buccaneers helped steer her towards the path she’d head down for the rest of her career.

“It was one Thanksgiving weekend and the normal reporter who was covering sports took that weekend off to go be with her family,” said Oliver. “I volunteered to go to this game. It was Tampa Bay Bucs under Ray Perkins, they were playing the Green Bay Packers, that’s when they played in Milwaukee. So I’m on the team charter, doing the whole nine, terrified because I thought I knew football, but when you’re up and at it, you’re like hmmm.

“So I went to cover it for my station, channel 13 in Tampa, and ended up asking a question that people remembered and talked about. Ray Perkins said something to the effect that ‘we were so bad, we couldn’t beat a high school team today.’ And my question was, naturally, if you can’t beat a high school team as a professional team, shouldn’t you step down? And I saw heads whipping around and they’re like, who is that? But coming from news and having my B.S. meter set on high, I felt like that was an appropriate question. I wasn’t doing it to get attention. But it just struck me, if that’s how you feel, it’s that how you’re gonna talk about your football team, that means your not doing your job.

“So that became a news story. And then, just contractually, the way it worked out for both of us, me and the young lady, my news director said this is the biggest step-down, you’re never gonna be heard from again, but I’m gonna let you go from news to sports. But I had to convince him that this was the move. And he said nobody is ever gonna hear from you again.”

Oliver has suffered from chronic migraines her whole life and the effects have sometimes been noticed by viewers during Fox broadcasts. This past January, many people were alarmed by the way she slurred her words during a game, which is can often be a side effect of intense migraines. Oliver opened up about just how extensive the pain has been and how it’s even caused her to miss at least one NFL game.

“Well, I’ve had several [migraines] over the course of the football season,” said Oliver. “For example, I’ve gone from averaging 5-6 a month down to averaging 3 a month. I consider that being lucky. They’re very debilitating for me. They’ve been a problem for a very, very long time. It’s caused me to miss a few games over the span of my career because I just couldn’t take the noise and the light and the sickness that comes with that. The nausea and the vomiting.

“There was one game, about three-four years ago. I live in Atlanta. I was minutes from Mercedez-Benz [Stadium]. My driver, I said, you gotta pull over. We were less than five minutes from the stadium. I’m hurling. My head is pounding. And I made the decision right then and there, I’m no good to anyone. There’s no way that I felt like I was gonna get through that game, be productive, help the crew, contribute in any way. So, turned around and I went home. I felt so guilty about that for the longest time, but they really do knock me out of action.

“I feel like they’ve gotten better, just from the standpoint of having fewer. But they definitely are real. And they continue to plague me. And not to have people feel sorry for me, but that’s just the way it is. That’s just part of my health issue.”

Oliver also talked about what she does if and when she gets hit with a migraine while she’s already at the stadium getting ready to work a game.

“Pain medication, to me, doesn’t work in those settings,” said Oliver. “I once found this cocktail of anti-inflammatory nausea medicine and a steroid, that, when I’m home, I carry the names of those medications around with me. So if I end up in urgent care or I end up in an ER, I’ll say this is something that can help to break it. It doesn’t end it, but it gives me a fighting chance to get through a game. But I have been tucked away in our production truck. I’ve been tucked away somewhere quiet in a stadium. But I’ve fought through it more than I’ve failed getting through it during a football game.”

You can listen to the full interview here.