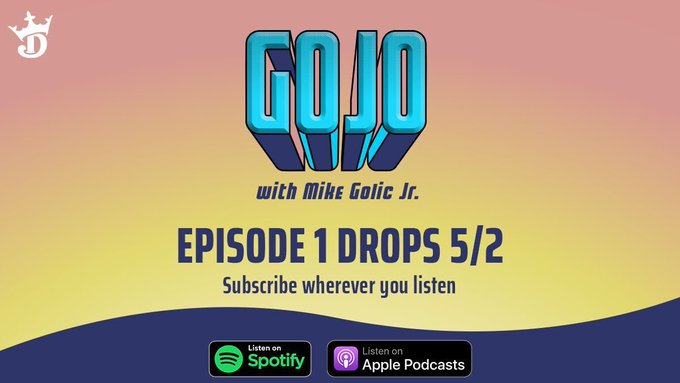 Back in February, Mike Golic Jr. left ESPN after six and a half years, mostly in daily national radio. His time there included hosting early-morning show First and Last, contributing to Golic and Wingo (with his father and Trey Wingo), and hosting national afternoon/evening shows Chiney & Golic Jr. (with Chiney Ogwumike, 4-7 p.m. ET from August 2020 to September 2021) and Canty and Golic Jr. (with Chris Canty, 3-7 p.m. ET from September 2021-February 2022), as well as calling college football games. Golic Jr. is now back in the daily audio game, but with DraftKings this time, where he’ll start with a daily hour-long video podcast with his former Notre Dame teammate Brandon Newman. He announced that move on Twitter Wednesday:

I’ll be doing a daily podcast called “Gojo” starting May 2nd! (plz follow our social handle @GoJoShow!) and the best part is I get to do it with the legend, my former ND teammate and best friend @BrotherBrandon_ pic.twitter.com/QiGbShdGnS

Here’s more from a DraftKings release on this new show:

“GoJo,” a new daily podcast scheduled to debut on May 2, will offer a unique perspective on the hottest topics across sports and culture that appeal to the everyday fan and those with skin in the game.

“When I look at the future of sports media, joining DraftKings was an easy decision for me,” said Golic Jr. “As someone who is passionate about creating content, having the freedom to develop original programming is the perfect opportunity at the perfect time. I’m excited to partner with Brandon as we take our individual and shared experiences as former teammates to the airwaves.”

The hour-long video podcast will air five days a week and be available on Apple Podcasts, Google Podcasts, Spotify, the iHeartRadio app and everywhere podcasts are available. Monday through Friday, the duo will break down the biggest games of the week while hosting regular guests and larger than life personalities across sports and media.

“Mike’s addition to the media family is another example of DraftKings partnering with high-profile talent and trusted personalities across sports media,” said Stacie McCollum, Vice President of Programming at DraftKings. “Leveraging his strong social currency, he and Brandon will tackle subjects that represent the broader interests and hobbies of today’s sports fan.”

Newman has done plenty of media work himself, including with Fox (both behind the scenes and with Joy Taylor on the Maybe I’m Crazy With Joy Taylor podcast), Barstool Sports, and NBCUniversal. (His Twitter bio of “Formerly employed by a fox, a stool and a peacock. Now a 👑” is a delightful way to reference that.) So this is a pairing not just of former Notre Dame teammates (and former linemen: Golic Jr. played offensive guard, Newman played nose guard on defense), but of a couple of experienced media figures.

The comments there from DraftKings’ McCollum help illustrate another part of the appeal for them too, with “high-profile talent,” “trusted personalities,” and “strong social currency. Golic Jr. has name recognition from his time at ESPN, and he’s also proven to be an entertaining personality on Twitter, where he has more than 240,000 followers. That’s definitely a big help in launching a new podcast. And Newman has some name recognition of his own from his Notre Dame career and his on-air appearances on Taylor’s podcast in particular.

It’s also notable that this release mentions that this is a broader signing of Golic Jr., and that this is only his first project. Richard Deitsch of The Athletic reported earlier this month that DraftKings is planning a podcast with Golic Jr. and his father Mike Golic Sr., with that also reportedly involving Jon “Stugotz” Weiner of Dan LeBatard Show fame (a show that DraftKings has a distribution deal for with Meadowlark Media). Golic Sr. also already hosts a weekly Golic and Smetty DraftKings podcast with Jessica Smetana, and it makes some sense to reunite the Golics on-air given that that went well on Golic and Wingo. But that particular podcast is reportedly set to launch closer to football season. It will be worth keeping an eye out for more details on that, if it happens as reported, and on any other projects Golic Jr. winds up doing with DraftKings.