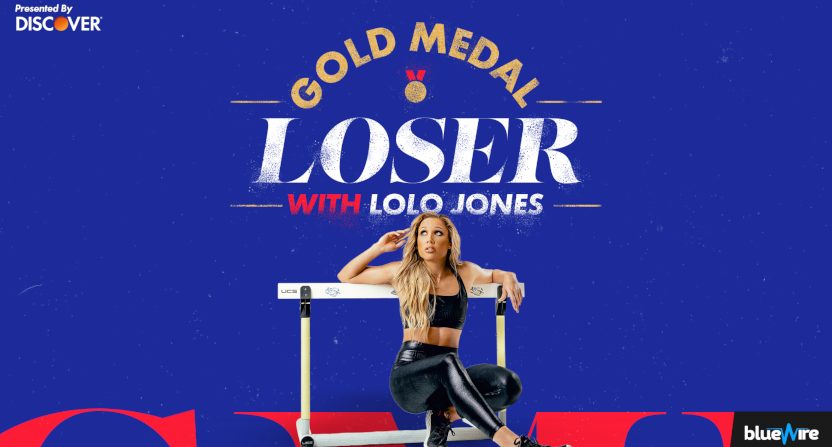 Podcasting company Blue Wire is continuing to expand, and bringing in some more big names and big sponsors. Their latest podcast is “Gold Medal Loser,” hosted by Summer and Winter Olympian Lolo Jones and with Discover on board as title sponsor. It’s comprised of interviews Jones recorded this summer while training for the 2022 Beijing Olympics (she was officially named to the U.S. women’s bobsleigh team in September; she previously competed in the Olympics in bobsleigh in 2014 and in track (hurdles) in 2008 and 2012), featuring the likes of Olympian skater Adam Rippon, Peleton instructor Jess Sims and former NBA player/current ESPN analyst Richard Jefferson walking Jones through the ups and downs of their careers. Jones spoke to AA by email ahead of this podcast launch, and said she was particularly interested in doing this to get a chance to be on the other side of interviews and talk to people from a range of backgrounds.

“I’ve always been a huge fan of podcasts and have been interested in creating my own. As an athlete, I’m usually the interviewee and wanted to have some fun on the other side of the table. We thought it would be cool to interview folks from different walks of life—including a big focus on Olympians and Paralympians. I’m always fascinated about the different personal journeys all these talented people have taken to get to the top.”

She said she hopes this podcast will stand out because of guests opening up to her, with her background as a frequent interviewee helpful there.

“To me, it’s all about making a guest comfortable and opening up and not give those canned answers we’ve delivered a thousand times in interviews as athletes or entertainers. I want the listener to feel like they really know the guest after having listened to our conversation.”

Jones said Blue Wire proved to be a great fit for her to launch this podcast.

“Blue Wire was a perfect partner as they have a great platform and experience working with all different types of podcasts. They let me really control the creative direction and shape the show how I envisioned it—but I’m still new at this platform so I leaned on them for insight on how to make this a success.”

This isn’t Jones’ first venture into the sports media space. She’s done quite a bit there over the years, including co-hosting female-athlete-focused Peacock show On Her Turf  (with MJ Acosta and Lindsay Czarniak) for the Tokyo Olympics last summer. She told AA she’d like to work in media more regularly after her career ends, and roles like this while she’s still training and competing are good preparation for that.

“For a while now, I’ve known that I want to get in the media space in some capacity when I wrap up my career as an athlete. I’ve tried to get as much experience as possible in the TV/broadcasting/new media space whenever I’ve had free time in my training schedule. Hopefully I can continue to learn where my passion is and where my strengths are, and continue to work to improve my weaknesses to become a better on-camera personality, wherever that leads to.”

She said that can be tough to fit in while still competing though, especially in two different sports.

“It’s been tricky for sure balancing training/competition and media opportunities. Especially as a 2-sport athlete (for the last several years), there isn’t really much of an off-season. I’ve tried to capitalize on any breaks I’ve had to get media experience…whether it be due to injury, competition seasons canceled from COVID, or any other extended windows where my training schedule is a little light.”

Jones said being busy works well for her, though.

“I get energized from being busy, so I can’t sit on the couch too long without working anyway!”

Jones is in quite a small group of people who have competed in both the Summer and Winter Olympics; the list’s at 170 all-time as of the end of last summer’s Games, as per Wikipedia, and there are only 11 athletes there who have represented the U.S. at both Summer and Winter Games. Jones said picking up bobsledding was challenging for her, but also a great experience.

“I take great pride being part of a small group of athletes that have reached both the Summer and Winter Olympics. Bobsledding reinvigorated me as an athlete. My natural talent transfers quite well from hurdling to bobsledding with the focus on speed, strength, quick bursts, etc., but, boy, is it a whole new world: individual sport [hurdling] vs having a teammate that you rely on [bobsleigh], training in 90-degree weather vs 20-degree weather. Instead of feeling like a seasoned vet, I was the new rookie.”

And she said that diversified experience has helped her with her moves towards sports media.

“I think getting out of my comfort zone and trying to perfect a new skill was a great life lesson. Hopefully I’ll be able to take my learnings (the good and bad) from the process of going from a rookie who had no idea what she was doing to winning a bobsled world championship will help me as I take on new sports media roles in the next chapter of my career.”

Overall, Gold Medal Loser is an interesting one for Blue Wire. It continues the extensive list of podcasts they’ve done with pro athletes past and present, including Chris Long, Aqib Talib, Cris Carter, and Darius Butler and Antoine Bethea. It also continues their approach of monetizing podcasts through cross-platform presenting sponsorships; this will be the fifth one they’ve done that way, and the second with Discover (which was previously the presenting sponsor for Brownstown). And it’s the next step in Jones’ move towards a sports media career. She said she’s excited for people to get to listen to it, and hopes it will be relevant to a wide range of listeners.

“Nobody has an easy or straight path to get to the top of our fields. Hopefully hearing about these life experiences will help the listener in some way. If you know me (or follow me on social), you know I’m always trying to do one of two things: inspire you or make you laugh. Hopefully this does both!”