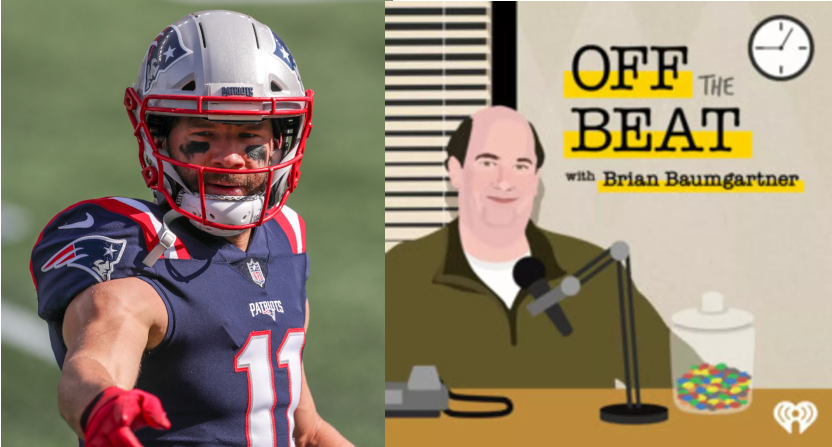 Former New England Patriots’ receiver Julian Edelman is getting into the podcasting game, and he’s doing so in an interesting way. Edelman has teamed with comic Sam Morril for a new podcast called Games with Names, which will focus on finding the best particular games in history and getting different perspectives on them. And Edelman announced that in an unusual way, too, doing so as part of his appearance on iHeartMedia podcast Off the Beat with Brian Baumgartner (the actor particularly known for his role as Kevin on The Office, but also for his work hosting the The Office Deep Dive podcast). That episode was released Thursday:

Here’s a transcription of the discussion of Edelman’s forthcoming podcast, starting around the one hour, 17-minute mark:

Brian: And now, breaking news. We’ll find some music to play. Breaking news: Games with Names, new podcast launching very soon, just announced. What can you tell me about your new podcast Games with Names.
Julian: Well Games with Names. I’ve partnered with this comic, Sam Morril.
Brian: Very funny.
Julian: Very funny. Upper East side kid from New York. Been a fan of his for a long time and what he’s been doing. And, uh, we wanted to start a podcast. Been sitting around thinking about ideas, what can we do a podcast on. I like to talk, I want to talk. Maybe a little bit here or there, got some insight. My buddy, who just so happens, his name is Kyler, is part of Coast Productions — one of our directors, huge part of our business. He comes in one day after Thanksgiving a year and a half ago. He comes in and says “I saw a guy at a sports bar and we didn’t know each other but we recognized playing football against each other. And it was crazy to hear his perspective of this crazy game we played and then hear my perspective.” So we want to hear the crazy perspective of important games in people’s lives from different perspectives. And so we wanted to find the best games with the greatest names. It’s a sports history podcast — find the greatest game of all great games. People always talk about the G.O.A.T, greatest of all time. What about the G.O.A.G? Greatest of all games.

That’s a novel approach, especially from a known athlete; there are sports history podcasts and athlete podcasts, but rarely do the two meet. And that combination might work particularly well with this idea of getting different perspectives on these games, as Edelman (seen above in an Oct. 18, 2020 game) presumably has plenty of athlete contacts he can reach out to. As for how well he’ll do as a podcast host, that remains to be seen, but Edelman was a pretty entertaining guest for Baumgartner. Here are a couple notable clips, first on how surprised he was to be drafted by the Patriots after a chalkboard session with them went poorly. That includes the line of “I’m over here thinking they f***ing hate me, like, they think I’m dumb.”

And here’s another one, with Edelman telling the story of how he first met Tom Brady, who he’d long idolized growing up in the Bay Area:

This was an interesting Off The Beat episode, part of Baumgartner’s recurring dives into sports. Many of his guests are from the acting world, but he’s done quite a few sports interviews as well, including with NBC Sports executive Jon Miller, NBA player turned ESPN analyst JJ Redick, and Green Bay Packers’ receiver Randall Cobb. And it’s notable to see him breaking some news on Edelman’s new podcast. We’ll see how that new podcast turns out.

[Off The Beat with Brian Baumgartner on iHeartMedia; Edelman photo from Paul Rutherford/USA Today Sports]