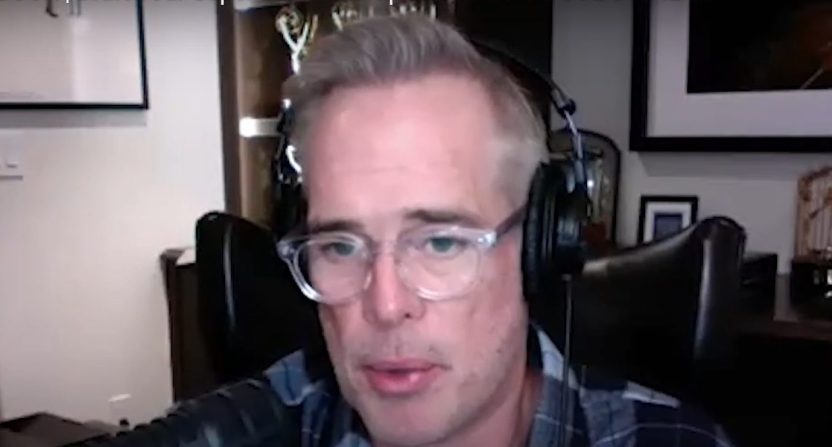 Since moving from Fox to ESPN in March, Joe Buck has given several interviews on that move, and they’ve all revealed a little bit of what went into it. He told Chris Long that while not calling the World Series is going to be “really weird,” “it’s time for somebody else to put their voice to it.” He told Stugotz and Mike Ryan of The Dan Le Batard Show that Fox had “floated” pairing him with Tom Brady, but he wasn’t sure how realistic that was, and was more interested in working with Troy Aikman again. On his own Daddy Issues podcast with Oliver Hudson, he talked about how his final Fox appearance was on The Masked Singer, which he didn’t know would be his last. And on long-running sports media podcast The Sports-Casters with Steve Bennett earlier this month, Buck had some interesting things to say about how that all happened, and how he finished last NFL season thinking he’d still be at Fox, do one more baseball season there, and still be with Aikman there on the NFL, with Aikman maybe doing Amazon’s Thursday Night Football as well but not leaving the network entirely.

“Honest to God, I never saw it coming.” Buck said (in comments starting around the 10:30 mark). “…It is true that all year long, I thought that at worst, Troy was going to do the Thursday nights on Amazon and then do the doubleheader game…the big, late Sunday football games, which is basically every other weekend, on Fox with me, and then he’d do the postseason and the Super Bowl. So his schedule would basically remain unchanged from what we had done the previous four years with Thursday night and Sunday night, and I would basically just do the Sunday games and stay at Fox. And that whole situation disintegrated fast.”

“That’s his story to tell, and he’s been pretty open about it. But you’re right, I think when I saw him walk out of the door, and he was gone totally, it kind of started in my head, ‘You know, what do I want to do here?’ Because you’re right, I’d told Fox, and I’ve said this a million times, and I said this to them, I was going to do baseball one more year, which would have been this year, and then I was going to step aside, and it was time for a new voice. I loved every second of it, but I feel like it was time. And I’m thrilled for Joe Davis. So that plan was kind of already set up. ”

Buck said he’d never really considered working for ESPN, especially as his wife (Michelle Beisner-Buck) already works there as a NFL features reporter, and they’ve liked keeping their careers at separate networks. But he said that all changed after Aikman’s move, as his familiarity with Aikman meant he liked the idea of still working with him, albeit at ESPN, much more than learning how to work with a new partner at Fox.

“And then Troy leaves and goes to ESPN. And I have never thought of myself as an ESPNer, mainly because my wife is there and I kind of liked the idea of us being at competing networks, so to speak. But then my mind changed once Troy was in that booth.”

“I was like ‘You know, I’m 53 years old, I don’t really want to go through the getting-to-know-you process with somebody else, I’ve done that a lot during my career.’ And it’s a pretty high-profile, at least in my weird world, and high-pressure situation, so I thought ‘If there’s any way I can get to where he is, and be with somebody who I know where they’re going sometimes before they know where they’re going on the air, and I really enjoy being around, let’s try to make it happen.'”

Buck said he left Fox on good terms and still keeps in touch with people there, and added that he’s very grateful for what the network did for him over the years.

“Fox did me a huge favor. They did not have to let me out. They offered me an extension, so it wasn’t like they were like ‘Oh, please take him.’ I could easily have signed an extension there and still be there now. But they understood that I wanted to work with Troy, and I think a change is probably good for everybody. So they made a trade, I think it was Penn State-Purdue. …That’s what I was worth, Penn State-Purdue.”

“But they let me out a year early, and they didn’t have to, and I’m so indebted to them for everything. I wouldn’t be anywhere without David Hill and Ed Goren and everybody else that got me in the door there and allowed me to keep doing it. And I got a call from my old boss, Eric Shanks, a few days ago, as he was headed to the NFL seminar, and we talked for a while. And it’s got a good feeling to it because it ended on really good terms. That’s the best part of it, feeling like everybody still likes each other.”

This is an interesting conversation on a lot of fronts. Buck’s alluded to some of this in other interviews, but the particular detail he goes into on why it was so important for him to stick with Aikman is notable. Broadcast chemistry between play-by-play voices and analyst is vital, as ESPN has found on Monday Night Football at times, and the since-2001 reps Buck and Aikman have had together makes them by far the longest-together top NFL pairing at the moment. That allows for some of that prediction of where the analyst wants to go, as Buck alluded to here, and it also helps fill time during less-contested games. (Chemistry’s also a good indication of why Buck’s comments here were notable; he’s appeared on The Sports-Casters with Bennett many times over the years, so there’s some familiarity and some relationship there, and that maybe helps Buck lay this all out.)