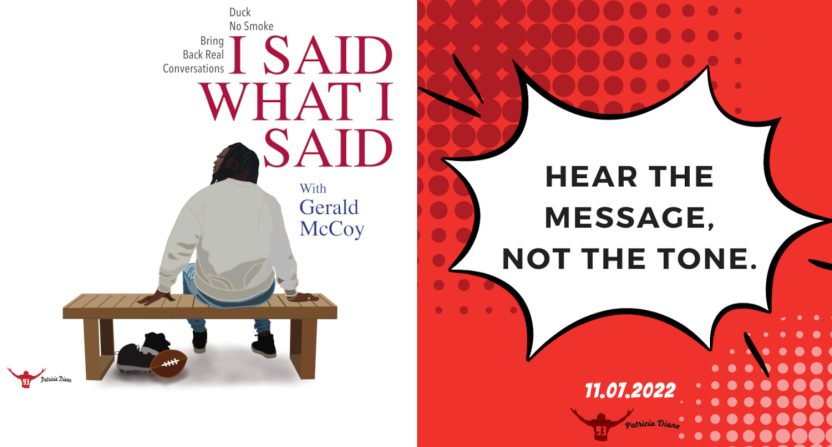 After a stellar college career at Oklahoma and a third-overall selection in the 2010 NFL draft by the Tampa Bay Buccaneers, defensive tackle Gerald McCoy found a lot of success in the professional ranks. He played for the Buccaneers through 2018, making six straight Pro Bowls from 2012-17 and earning a first-team All-Pro nod (in 2013) and two second-team All-Pro selections (in 2014 and 2016) along the way. He then spent time with the Carolina Panthers, Dallas Cowboys, and Las Vegas Raiders. And now, he’s launching his own podcast.

The 34-year-old McCoy hasn’t officially retired yet, but his last NFL game was Sept. 13 last year. He suffered a season-ending knee injury there, and then picked up a six-game suspension from the NFL for a violation of the league policy on performance-enhancing drugs. He became a free agent in March. So it’s unclear if he will play again. And he has made notable steps into a broadcasting career this year, including a week of appearances on Craig Carton‘s new FS1 morning show last week.

McCoy has now launched a new I Said What I Said podcast on sports and pop culture. That podcast comes from his own Patricia Diane Productions, in association with FubbzMedia, LLC. Here’s more from a  release:

Six-time Pro Bowler Gerald McCoy hosts a new podcast, “I SAID WHAT I SAID” centered on pop culture, sports, family, and life. Each episode features Gerald’s unapologetic and endearing frankness on everything from the Marvel Universe to the latest sports and movie news. A fan favorite in the NFL for over a decade, Gerald is known for his love of family and his passion for superheroes, his joy for life evident to all. Now with co-host and co-producer Bryant Perkins, Gerald will focus on the value of conversation and interpersonal relationships and tackle pop culture topics with the reliability that has made him stand out as a guest host on sports media in the last year. The eight-episode drop of “I SAID WHAT I SAID” is produced by McCoy’s Patricia Diane Productions in association with FubbzMedia, LLC, and is available on Apple and Spotify.

“You asked for it, so here it is, my first podcast entitled, “I SAID WHAT I SAID,” said McCoy. “This is not a show about any one topic or subject. This podcast is meant to reach all audiences. You’re going to get me in my purest form. I don’t hold back, and I say how I truly feel. This pilot season is just an introduction to what this podcast will be. This show is about conversations. Conversations are lost, and I want to find them again. We converse about sports, life, movies, pop culture, relationships, holidays, superheroes, and much more. I can’t wait to hear from you…………. LET’S GET INTO IT!”

This is just one of many notable media things so far for McCoy. And that makes sense, as he also says in that release he’s looking to make a transition to broadcasting, TV, and film when he is done playing; that confirms he’s not fully retired yet, but it fits with why he’s doing various media things at the moment, including this podcast. Here’s a promo clip he dropped for it last week:

And here are some of the other media segments McCoy has done, with Carton on FS1 (where he spent all of last week), and on NFL Network:

Monday morning Halloween special with @Geraldini93 in the building ?

He’s in studio all week with @craigcartonlive and @Decker6

G-Mac had a WEEK. We recapped his time in New York City ? WATCH:@Geraldini93 pic.twitter.com/6an0s7ce7A

@nyjets @Geraldini93 Jets, when very few believed, Gerald McCoy knew the Jets would be good and the others on @nflnetwork laughed! pic.twitter.com/xVyn2UXS58

McCoy has also drawn some interesting discussion for the candid thoughts across sports he’s put out on Twitter, including one on the Nets that drew a comment from Kevin Durant:

Love u my brother but please stop. I’m playing ball for a living, that’s really enough for me. https://t.co/QiAeoeCC5K

We’ll see how McCoy’s I Said What I Said podcast (which is set to be an eight-episode series in this “pilot season,” with new episodes releasing each Monday; two are already out) turns out, and how it fits into the wider athlete-focused “new media.” We’ll also see if this podcast winds up propelling McCoy into a more full-time media career. The podcast is available on Apple Podcasts and Spotify.