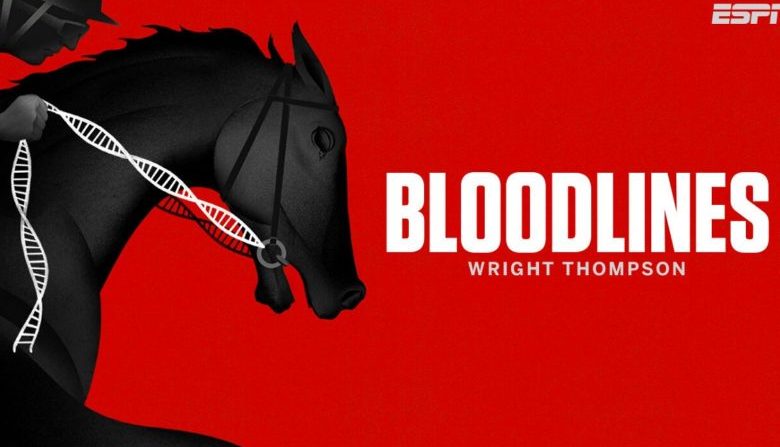 What is the future of horse racing?

That’s the question at the heart of “Bloodlines,” the debut series in ESPN’s new storytelling feed, ESPN Investigates. For many, like the protestors who stood outside Santa Anita Park in recent years calling for its closure, there’s a hope that it won’t have much of one. For those involved in the business, the loss of horse racing means the fallout of a billion-dollar industry that would affect hundreds of thousands of people, not to mention the animals involved.

Host Wright Thompson says early on in the first episode that horse racing, more than any other U.S. sport, lets you understand what is happening in America in that particular moment. That by scratching just below the surface, the sport shows you “where we are as a people and where we’re headed.” So what, exactly, was the sport trying to tell us when racehorses seemingly started dying at an alarming rate in Santa Anita between 2018 and 2020?

Bloodlines, a 3-part series dives into this question by examining the past, present and future of this hallowed American sport.

Each episode of the three-part series is its own distinct part of the story. The first episode goes back to “solving” the mystery of Santa Anita, so to speak. Most people are aware of the horse deaths that have happened, but fewer people are likely aware that an investigation did not drum up any kind of conspiracy or disease. However, the solution doesn’t provide all the answers, so the second episode takes us to the past where high society egos and an alleged murder set horse racing on the track it currently finds itself running. Finally, the third episode provides a scientific reason to explain not only the deaths, but also how the way horse racing built itself is likely going to be what destroys it.

Ultimately, the series justifies Thompson’s weighty proclamation up top about what horse racing lets us understand. The answers that he uncovers and the effect they have on the sport’s present and future are very much in line with so many other things happening in American society right now.

Listening to all three episodes in one sitting is recommended. On my initial listen, which was split between two days, some of the connective tissue between the questions asked and the answers given were forgotten, which lessened the payoff. However, by returning to the first episode later, there were a lot of moments that helped clarify the importance of what’s learned. Thompson is telling a complete story here, even if each episode jumps wildly through time and topic.

How you feel about “Bloodlines” and the point it’s making will largely be influenced by how you come into it already feeling about horse racing. If you find it to be a thrilling sport tied directly to The American Way, as some of the people interviewed will say, then you’re likely to be more drawn in by the harbingers presented. However, if you see it as an outdated and barbaric form of entertainment, you’re probably going to have more than a few eye-rolling moments as people who make millions of dollars getting horses to breed with one another try to explain that we’ll lose something important if horse racing goes away.

Multiple people that Thompson speaks with talk about the billion-dollar toll that losing the horse racing industry would take on the economy, but it also leaves room for the toll the sport takes on the animals at the center of it. “Bloodlines” presents both sides of the coin and ultimately leaves it up to you to decide how to feel, even if Thompson makes it clear he has a soft spot for the sport.

Anyone expecting this podcast to be a deep dive into the Santa Anita story may come away disappointed. The series uses that event as the catalyst to explaining something bigger, but a second episode that lingers on extremely wealthy people and their problems ends up falling a little flat when it butts up against that initial expectation. Still, the third episode brings home the point of the whole story, and it ends up putting both of the previous entries in context.

Fans of ESPN’s previous investigative podcasts and 30 for 30 documentaries will find plenty to appreciate here. “Bloodlines” fulfill the promise of the ESPN Investigates feed, which is to “feature investigative reporting that uncovers hidden truths and introduces unforgettable characters.” It sets a tone that will make you happy to remain subscribed to the feed in order to find out what comes next.