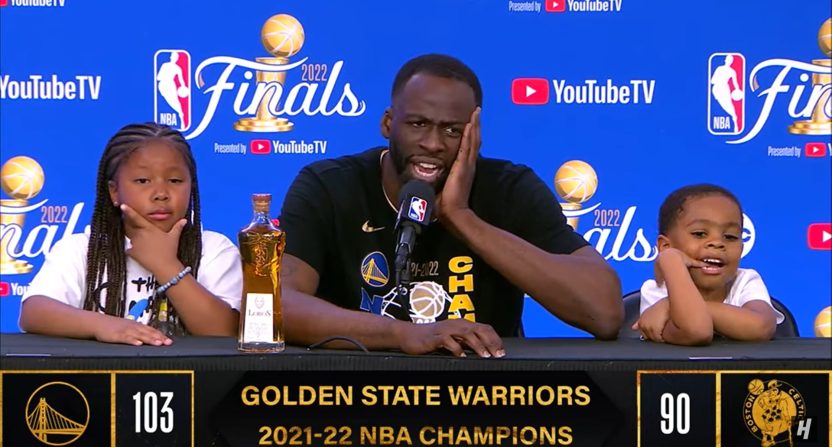 We knew this was coming from Draymond Green. After some media pundits wondered if his podcast was to blame for his deplorable start to the NBA Finals, the Golden State Warriors forward fired back after winning his fourth championship.

Green was solid in Game 6, posting 12 points (including his first three of the series), 12 rebounds, and eight assists and helping Golden State secure their fourth championship in eight years. But he also had some abysmal performances along the way in this series. There were three games during the 2022 NBA Finals where Green had more turnovers than field goals. Three games where he fouled out and three games where his field goal percentage didn’t surpass .250. But now that Green has his fourth ring, he blames the media for portraying a false narrative about how bad he was at times during these Finals.

“When I speak into new media, going into Game 4, it was made out like ‘oh he’s having this terrible series.’ But if you know basketball and you watched Game 1, I did not have a bad Game 1 and I had an incredible Game 2,” Green told reporters. “Game 3 was kind of like terrible…you read these narratives, I saw, I think Stephen A. said, ‘he’s having the most horrific Finals of an NBA starter in history!’ Dude, you ain’t gotta exaggerate that much. That’s ridiculous.”

Was his podcast to blame for having bad games during the Finals? No. But it also wasn’t just a media narrative that he was terrible in this series prior to Game 6.

Green was so bad in Game 3 that even he admitted he played “like shit.” He was still bad enough in Game 4 to warrant a benching from head coach Steve Kerr. And even Green’s mom was so confused by his poor play that she was on Twitter wondering if her son was replaced by a less talented clone.

Green took issue with the media labeling his NBA Finals play as historically bad, but you have to be pretty bad to get called out publicly by your mom. During Game 3, Green became the first person in NBA Finals history to play at least 34 minutes fouling out with less than five points, five rebounds and five assists. That’s historically bad, not a media narrative.

Despite the historically bad performance in Game 3 and his overall series struggles, it’s a good thing that Green will continue his podcast through the summer and next season. He’s entertaining, unfiltered and great for the NBA. But if Green is going to continue attempting to reshape the media, don’t create a false narrative about the media creating false narratives.