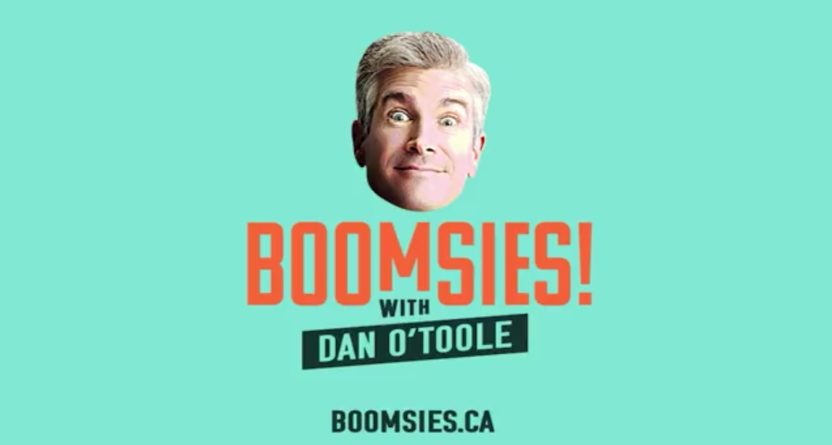 Both Canadian and U.S. sports fans are probably familiar with Dan O’Toole, who hosted SportsCenter on TSN with Jay Onrait from 2003-13 and then again from 2017 to February 2021 (when O’Toole was laid off) around an intermission where they headed to the U.S. to work for FS1. After that layoff, O’Toole has been been pretty quiet, but last week saw him announce a new podcast, “Boomsies” (a podcast based on the name a Los Angeles producer used for big plays and blunders), which appears on U.S. betting company BetRivers’ YouTube channel. That podcast also has O’Toole again working with famed producer Tim “Producer Tim” Moriarty, who paired with him and Onrait at both TSN and FS1. Here are some of O’Toole’s tweets announcing that podcast:

First ever episode of Boomsies is up! Get ready for tears. Sorry. Apple Podcasts: https://t.co/5970h7pWVT

Boomsies, where we tackle the game everyone’s been talking about: wordle. First full episode of Boomsies is up on the YouTube: https://t.co/UnvnhEjv45 pic.twitter.com/Wpjc9slC06

O’Toole spoke to Sean Fitz-Gerald of The Athletic about this, and he had some interesting things to say, including discussing his July 2020 Instagram post about his daughter Oakland that suggested that she was abducted, with a police service later posting that the child was safe with her biological mother in Peterborough. He told Fitz-Gerald “That’s obviously something I would love to take back, but at that time, that was what I felt I needed to do. …Who in their right mind would think that someone did this for attention, or that I did it knowing what would happen? I did it because, at that moment, that was my last resort. That was my cry for someone to please help me in this situation.” And he mentioned that he now sees Oakland regularly, and “that’s access that is continuing.”

Beyond that, O’Toole had some notable comments to Fitz-Gerald about why he’s now getting back into sports media. He said many people wrote him off, especially after that July 2020 Instagram post, after his public comments after that that he was taking time off to work on his mental health, and after his February 2021 layoff. But he feels he’s in a better place now:

“When people asked me what I was going to do, I actually had no idea. …Talking to some former co-workers — some former bosses — and one of them said, ‘Well, Dan, I think you’re done in the industry.'”

…“Having a very public — essentially — mental breakdown, with a situation in my life,” he said. “That probably entered my brain, where people don’t want this guy around.”

O’Toole said he started making changes soon after his dismissal from Bell, shifting the focus of his identity from work to appreciate other facets of his life. He said he checked himself into a treatment centre last February and stayed for a month.

As a result, for most of the past year, he said he is “the most present I’ve been in my entire life.”

“In the last year? I don’t want to say I’m a phoenix rising from the ashes, but I kind of feel that way,” he said. “The transformation in myself in the last year, with my relationships with everyone in my life, with the person I’ve become, it maybe was one of the best things to ever happen to me.”

It’s certainly positive that O’Toole feels he’s in a better place now, and that he feels he’s able to return to the sports media world. And his podcast will definitely draw some attention. The work he and Onrait did over decades of making a fun-to-watch sports highlights show remains much appreciated by many, including this writer, and his discussion of taking that ” I don’t want to preach. I just want people to hang out” approach to this podcast absolutely has some merit. We’ll see how this turns out for him and for BetRivers, but it’s definitely notable to have O’Toole making sports content again.