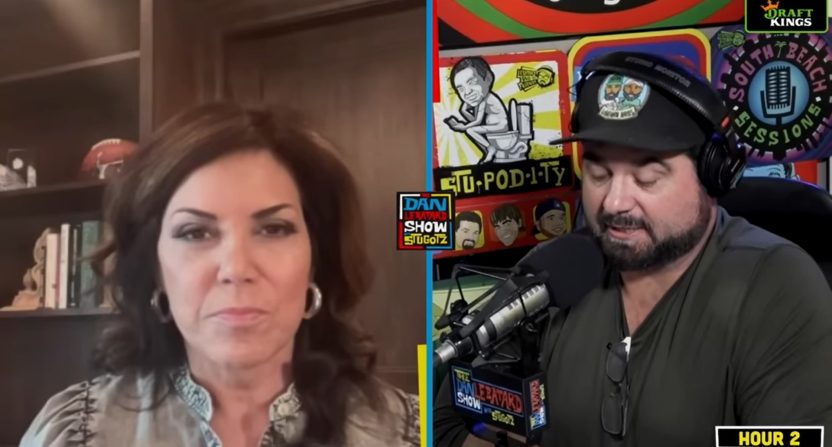 Dan Le Batard claims there was no malicious intent regarding his combative interview with Michele Tafoya last month, but he admits the conversation “wasn’t a good look for anybody.”

“I don’t gain anything from how that played out,” Le Batard said. “I don’t want clicks gratuitously, I’m not in the cheapened click business. I really went into that conversation with Michele Tafoya hoping that the conversation would be, ‘Hey, this was somebody I had a friendly, cordial relationship with. Let’s see if we make some art here reconnecting after 15 years. Not combative art, just catching up because this bridge can be traversed by people who know each other a little bit.’ And then it went off the rails from the start.”

“The start” was when Le Batard introduced Tafoya to the podcast with, “I have read recently that you have been on the dark side, secretly on the dark side.” The dark side seemingly referred to Tafoya’s conservative political views which have been highlighted since her appearances on The View last November.

According to Tafoya, she immediately felt “ambushed” by Le Batard and his producer Mike Ryan, claiming she was booked for the segment with the understanding that the conversation would be about her career. But after she took exception to the “dark side” comment, the conversation quickly dove into their conflicting political views, with Tafoya being pinned against the entire Le Batard Show cast, rather than having a cordial chat about her career as a sports announcer.

There was no discussion of her time with Al Michaels and Cris Collinsworth on Sunday Night Football, no mention of working the Super Bowl or leaving NBC, the interview was collectively dominated by opposing political and social views.

“The second I got on, I was ambushed with ‘You’re anti-CRT. You’re a racist. You can’t read the Florida law without it being homophobic,’” Tafoya lamented during an appearance on Fox News with Greg Gutfeld. “I was absolutely ambushed.”

Tafoya did not state who the podcast was with during her appearance on Fox News, but we were quickly able to figure it out when The Dan Le Batard Show aired the 30-minute interview less than 24 hours after her gripe of being “ambushed.”

“She thought she was ambushed, I’m not an ambusher,” Le Batard told Strauss. “I didn’t intend to ambush her. It just went off the rails immediately because my introduction was awkward. She felt like she had been lied to, but I really went into that interview hoping to talk to her about her career.”

Not only was Le Batard dissatisfied with the way the interview with Tafoya was conducted, but he expressed some regret over the decision to even air the podcast episode.

“If I had some do overs there, I would like to do it over and I’m not sure I would have even run it, given what the fallout was,” Le Batard said. “Because we just went in circles. It was just combative, I didn’t think it was a good look for anybody.”

Choosing to keep the episode under wraps would have been an interesting decision. Scrapping it was possible considering Tafoya never mentioned Le Batard during her Fox News appearance. But if word got out that Le Batard chose not to air the interview, it would have eventually sparked serious demand for the episode to be released, especially with everyone aware of their conflicting political views.

Having listened to the interview in its entirety, Le Batard, as he admits, certainly could have found a better way to introduce Tafoya to the show. But the contentious nature of the conversation never came across as an ambushing. Yes, the interview went “off the rails,” but it happened organically, for better or worse.