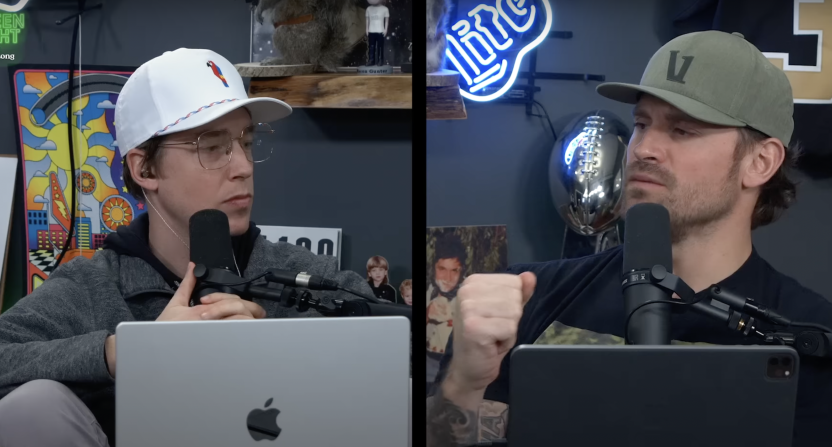 The son of Hall of Fame defensive end and longtime Fox NFL analyst Howie Long made a name for himself off the field thanks to his outspoken nature and ability to take on controversial topics. It seemed only natural he might follow in his dad’s footsteps and make a move to TV, but aside from one-off appearances on ManningCast and other people’s shows, he’s stuck to mostly non-TV media ventures.

Long has instead found his niche in the podcasting world, as the host of The Green Light Podcast as well as other podcast series. And when it comes to working on TV covering the NFL, it sounds like the former player is pretty happy not doing everything that entails.

“Sure, I maybe could work towards having one of those good jobs, but I also understand there’s a big process with that,” said during an episode of The Season with Peter Schrager. “I’ve been at a crossroads at times as a media guy where I’m like ‘Should I just do that?’ If I got to ask myself, then I don’t really want it. If I’m like ‘Damn I got to take a flight up there every week, I got to get suits’, then I don’t really want to do that and honestly, the couple of times I’ve been on TV, I don’t like the attention.”

For Long, being on TV is performative, whereas his podcast allows him to simply be himself.

“Being on TV, I get really uncomfortable performing,” said Long. “I don’t like performing and I don’t like being told what to say. Here, that never happens. For the most part, I think finding your groove in this side of things is just having conversations…It’s just a nice change of pace.”

Not to mention, Long doesn’t sound too interested in having hot takes for the sake of it. So as long as the podcasting revenue keeps rolling in, that’s going to be the preferred route.

“The world of podcasting has gotten better where the money is very good. Maybe I’d be making a little less money starting out doing studio stuff,” said Long. “For me, I do not like — whether it’s Twitter or whether it’s a guy on the street — I’m over arguing with people.”