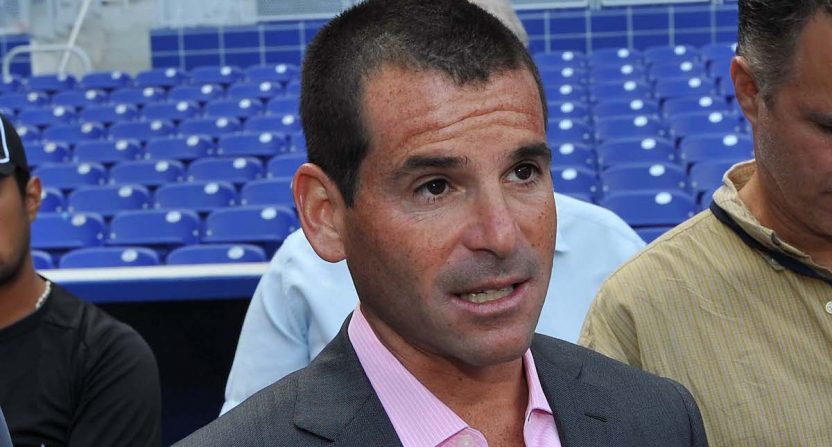 David Samson accomplished a lot during almost two decades in Major League Baseball. He was an executive with the Montreal Expos and the president of the Miami Marlins. His Marlins won the 2003 World Series and he got Marlins Ballpark (now known as loanDepot park) built.

Now, he’s the host of the daily sports podcast Nothing Personal with David Samson and is a baseball analyst for CBS Sports. Awful Announcing caught up with Samson to discuss his lingering COVID-19 symptoms as well as the business of sports and his podcast.

I’m good. I have no taste or smell (since Jan. 20). But I’m healthy other than that, so I consider myself lucky.

How annoying is that, not being able to taste or smell?

It’s depressing. I’m pretty good about worrying about things I can control. I try to practice smelling and tasting. But other than that, I can’t control it much. (The doctors) just don’t know. They said if it’s not back within a year or so, it could be gone forever. I’ve been to many doctors. They pretty much all say the same thing.

What do you miss the most?

How will sports on TV be different 10 years from now?

Will the major sports leagues form their own streaming services?

I don’t think that. There are so many content providers out there looking for live sports. Just look at what Amazon has done by taking over the Thursday night package in the NFL. I think Amazon is just starting. Amazon would like, if they could, to control the content and the sports platform as a way to funnel people towards Amazon and Amazon Prime.

Which MLB teams do you admire?

Let’s split that up between on-field and off-field. I don’t think there is a smarter front office than the Tampa Bay Rays. I always wanted to emulate Tampa. I think it all starts at the top. And I probably wasn’t good enough at letting my people do their job the way that Stuart Sternberg, their owner, lets his people do their job.

In terms of off the field, I’m appreciative of the job that teams like the Cubs do, teams like the Yankees, where they have generated so much off-the-field revenue that’s not subject to revenue sharing. So much revenue that they’re able to make a lot more choices when it comes to their on-field product. The Cubs and Yankees fill their stadiums, and they have an attachment to their fanbase that is second to none.

If a baseball franchise asked you to run its business, would you?

No. I did it for 18 years. I won a World Series. I built a ballpark. I built a team, signed players. Traded players. Lost 100 games. Had a championship parade. I’m not sure what’s left, and I was so fortunate to do it for so long. But I love what I’m doing now with my show “Nothing Personal.” I love having the freedom. I love having the platform and the ability to talk about subjects that are meaningful to me. I love being an MLB analyst for CBS. I’m very happy right now.

They pay me to talk, and that’s a dream come true, right? I started getting paid not to talk by my parents. It’s way more fun to talk than to be quiet. And I’m just lucky. This show started with me and my producer, Matthew Coca, from nothing. We’ve built the audience very organically. And it keeps growing. Every month is a new record.

How much did your parents pay you?

What do fans not understand about the business of sports?

You have a business where you go into a season where 29 out of 30 (fan bases) in baseball or 31 out of 32 in football will be unhappy (at the end). That’s an unbelievable concept. Think about starting a business where you know the majority of your customers will not be happy with your product at any given moment, any given game, week, month, year. So, overcoming that is way more difficult than people realize.

Is there a trade or decision you had to make that affected you emotionally?

Letting Dan Uggla go was tough for me. But I was honest with him and told him that we weren’t going to be able to match what Atlanta was offering. Trading Mark Buehrle was very difficult, especially considering the circumstances. We signed him to a long-term deal and traded him the next year because we had to redo our team. I had grown to really love him and his family.

I regret things I couldn’t control. I regret that we never made it back to the playoffs after 2003. My son was born in ‘03 and now he’s in college. He went his entire childhood in Florida without seeing an October game. I wish the people in Montreal had a baseball team and it didn’t go to Washington. I love Montreal and the people there.

What was a fun perk of being an executive?

The interesting thing for me was sitting in a room with Don Mattingly. As a kid, I would watch him play. All I ever wanted to do is meet Don Mattingly. And now I’m hiring him. It’s a very bizarre thing when you’re in a meeting and you step outside of yourself and say, “What the hell am I doing here?”

Who are some non-sports celebrities you got to meet?

I’ve partied with Stephen Baldwin. I’ve had great conversations with Rob Reiner. I’ve spent a lot of time with Marc Anthony. Just people who want to be around sports, and I provided access to them and made memories for them and their families. I loved being in the memory-making business.

Right now, I would say it’s Coda. I think any time you have a story about a child, what gets to me is a child trying to break free from whatever their family situation is, whatever their hardship is.