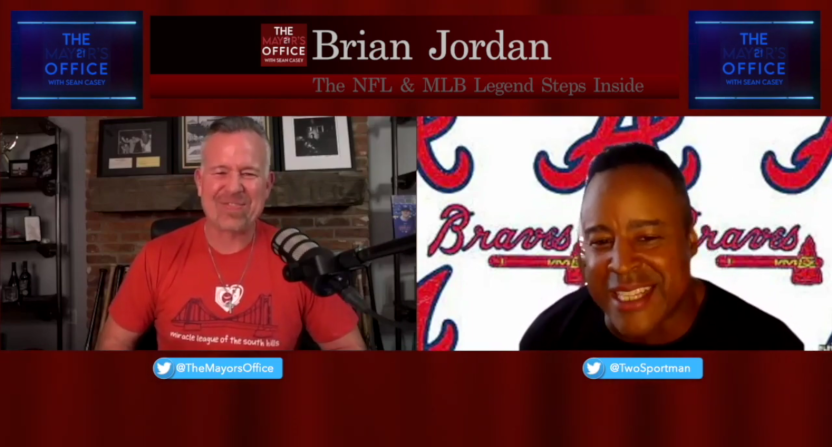 There’s a longer list than you might think of people who have played in at least one NFL and MLB game (66 people, with a couple more who could be added if you consider pro football before the NFL), but only seven have made that list since 1970. The three with the most success in both leagues in that since-1970 group are Bo Jackson (694 MLB games, 38 NFL games), Deion Sanders (641 MLB games, 188 NFL games) and Brian Jordan (1,456 MLB games, 36 NFL games). Jordan (seen at right above) appeared on the “The Mayor’s Office” podcast from former MLB first baseman/current MLB Network broadcaster Sean Casey (seen at left above) this week, and talked both MLB and NFL. Here’s the full podcast, with Casey’s interview with Jordan starting around 4:30:

A few particularly notable quotes, starting with what Jordan said about how he would have been regularly fined in today’s NFL given current restrictions on helmet-to-helmet hits:

“I would have lost a lot of money right now playing in the game. Back in my era, we were taught to lead with the front of your helmet. That’s helmet to helmet. We didn’t even think about concussions back then…It’s a different game. I like the fact that they are teaching them at the youth level to keep that helmet out of there.”

Here’s what Jordan said about talking to then-Atlanta Falcons teammate Deion Sanders in 1992 about leaving the NFL to focus on his baseball career after the St. Louis Cardinals gave him a big bonus to do so:

“I think he was mad at me because, you know, I was a big part of that defense. And when I left they were moving into the new dome. And the defense was bad. I mean, I used to watch the games and I would turn it off because I was so mad that the safety that they signed – he sucked! And I think everyone was – well Deion was mad because I left. And that’s why eventually he left (the Falcons) and won some rings with Dallas and San Francisco.”

With the Cardinals, Jordan regularly batted behind Mark McGwire in 1998 during McGwire’s famed home run record chase. Jordan hit .316/.368/.534 that season, the best average and on-base percentage of his career (and second-best slugging percentage), but told Casey it was difficult following McGwire, especially in the batting practice order:

“Dude, everybody was talking about the pressure for Mark McGwire trying to hit all those home runs…. It was pressure trying to hit behind him, man! I’d get booed all the time in batting practice! It was crazy! I mean they would boo me in batting practice because he would leave the cage and here comes old right-centerfield, gap-hitting Brian Jordan. Oh, I hated BP for a while.”

The whole interview is interesting, but those early comments on the NFL of the 80s and 90s and the helmet-leading approach are perhaps particularly notable. A big part of the dialogue around NFL concussions, the ongoing settlement issues there, and the attempts to find safer paths forward for football comes with the discussion around helmet-to-helmet hits, and the efforts leagues (including the NFL) are currently taking to minimize them. Jordan’s comments here are far from unique, but they’re a further illustration of just how much helmet-to-helmet play used to be emphasized. His comments about the youth level (his 10-year-old son plays football) are also a good illustration of how that is changing. It really is a different game now, and while there are still plenty of dangers (including from concussions, from the helmet-to-helmet hits that do still happen, and from a sum total of subconcussive hits) to today’s forms of football, it is notable to hear former players talk about just how much it has changed.