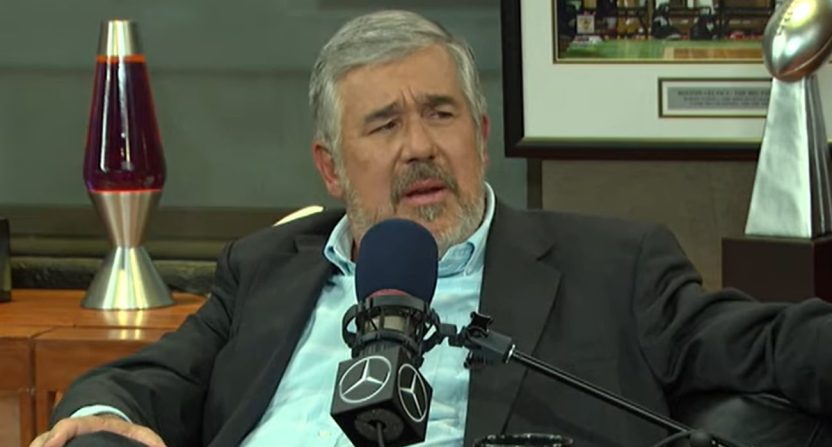 As some of the world’s best golfers are chastised for their exodus to LIV Golf, Bob Ley is asking for the NBA’s relationship with China to receive equal treatment.

Brooks Koepka, Bryson DeChambeau, Phil Mickelson and many other big names have been accused of serving as a tool for sportswashing by jumping to LIV Golf, and rightfully so considering the league is funded by Saudi money. Saudi Arabia has notoriously bad human rights issues, generating billions of dollars from oil and slave labor. But China has its own notoriously bad human rights issues, and the NBA has, for decades, profited off its business dealings with a country that similarly utilizes slave labor, along with a litany of other human rights concerns.

“It’s real easy to be pissed off and angry about LIV Golf and the Saudis, all I ask for is philosophical and ideological consistency,” former ESPN anchor Bob Ley said on Michelle Beadle’s What Did I Miss? podcast. “Apply it to China consistently, LeBron.”

Ley noted Adam Silver’s poor response three years ago, when NBA executive Daryl Morey tweeted in support of Hong Kong protests against China. But Ley did add that the NBA commissioner has since acknowledged some of the human rights issues in China, costing the league millions of dollars in doing so.

“There’s been other reporting,” Ley said. “I mean, the Fainaru brothers at ESPN.com have shown some of the things with camps and knowledge of what the NBA’s involved with. China has as many issues as any other country, and is the outrage tempered by the popularity of the sport and the dollars at stake?”

Ley pointed specifically to LeBron James, who has been a leading voice on issues of social and racial inequality within the United States, but continues to turn a blind eye to China’s deplorable human rights issues.

“LeBron, I think, has a responsibility, and an opportunity more importantly. And it’s easy for people to come to the conclusion that players, at a time when social voice and equity are very much a part of sports, moreso than ever before, here’s an opportunity to make a stand. If you are a billionaire, you can afford to perhaps make a stand and at least become educated,” Ley told Beadle.

“Freedom of speech in China is a very different thing, freedom of access to the internet is a very different thing…are we comfortable dealing with a nation like that and putting it all on the table?” Ley continued. “Those are questions people have to answer. If you wanna get in a froth about LIV Golf, and you have every right to…take a pause, take a deep breath and look at China and see, should this outrage or this introspection and this attention extend to the NBA?”

The difference between NBA players and the athletes joining LIV Golf is that these golfers are choosing to go to a league backed by a country with human rights issues. In LIV Golf, it’s the individual players that are serving as a tool for sportswashing. Because of that, the media is going to continue asking those golfers about their decision. Basketball players, however, don’t have another top-level option, so the media is less inclined to ask them about the NBA’s dealings with China. The NBA is it, regardless of whether or not you agree with the league’s business relations.

What I appreciate about Ley’s call for action is that he didn’t criticize James or other NBA players for their social initiatives in the United States. NBA players understandably prioritize issues within their community, and they can’t be expected to address every human rights issue around the globe. It would be great if James calls attention to the issues in China, but his lack of doing so should not take away from his philanthropy and social awareness in the U.S.