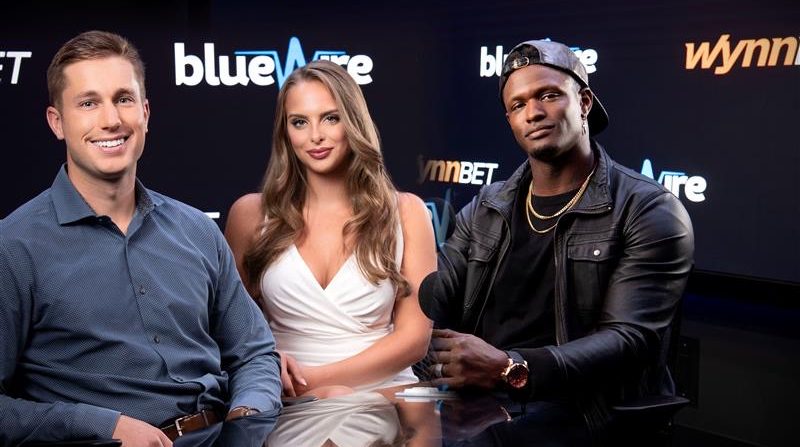 When podcasting company Blue Wire announced a partnership with Wynn for the Blue Wire Studios @ Wynn Las Vegas, WynnBET content and advertising, and more, Blue Wire CEO Kevin Jones told AA the studios (which are set to open next week) and the WynnBET partnership “will allow us to get national talent.” Some of that national talent has now been revealed. Blue Wire announced three hires Thursday for new specific WynnBET podcasts “Bet To Wynn” and “Upsets & Underdogs”: those hires are former NFL defensive back and NFL Network/Sky Sports personality Will Blackmon (seen at right above), former NBC Sports Northwest Seahawks’ reporter Joe Fann (seen at left above), and current WynnBET personality Claudia Bellofatto (seen in the middle above). Here’s more on those people and those podcasts from a release:

‘Bet to Wynn,’ hosted by WynnBET on-air hosts Claudia Bellofatto and Joe Fann, will air twice weekly on Mondays and Thursdays with a debut of Sept. 7. The program is a collaborative, conversational and social podcast that will personalize everyone’s sports betting experience. The goal of the show will be to make listeners feel like they’re betting with the hosts and entertaining guests.

Fann previously worked as NBC Sports Northwest’s Seattle Seahawks Insider for the past two years, where he hosted the ‘Talking Seahawks Podcast’ weekly and made regular TV & radio appearances in the Seattle area. Bellofatto joined WynnBET in July and has been a part of the Blue Wire network since her arrival to Las Vegas.

Will Blackmon will be the host of ‘Upsets and Underdogs’ podcast, which will look at unique sports specific stories around bad beats, upsets and gambling topics. The show includes heavy insight and intelligence on the sports betting landscape and will bring guests on to discuss the biggest stores and their careers.

Every two weeks, Blackmon will also do a dive deep on a specific story and bring to life some of the most iconic upsets and surprises in sports history. For example, ‘The Music City Miracle,’ Buster Douglas beating Mike Tyson and Leicester City winning the Premier League and many more to be featured in this dynamic show concept. Blackmon, a former NFL defensive back and Super Bowl champion with the New York Giants, served as a media personality for NFL Network and built a significant social media following while delving into entrepreneurship.

Jones told AA that Blackmon’s combination of insight and humor will help him stand out.

“His potential reminds us of a Nate Burleson. He’s extremely polished, knows the Xs and Os but also is low key hysterical. He can build great chemistry quickly with guests. He’s been in the rotation at NFL Network and is a Sky Sports correspondent in London, where he’ll live overseas for the first month of the NFL season in an expanded role there. Will has credibility and he’s been generating massive social media engagement with commentary and memes.”

As for Fann, Jones said his NFL reporting experience and host/analyst flexibility will be an asset.

“His potential reminds us of Kyle Brandt on the NFL Network. He’s developed strong on-air skills at NBC Sports Northwest and 49ers.com. Has strong relationships and sources in the NFL. Funny, charming. Versatile to play host or analyst. Good at social media. Chose to work with Blue Wire and WynnBET over radio and writing opportunities. Really think Joe can discover his voice using this show as his platform. The beat reporter shackles are off.”

And Jones said Bellofatto is a newer face on the sports media scene, but one who already has a lot of insight into betting and betting coverage.

“Fresh out of Syracuse, Claudia is part of the new school of broadcasters who are well-versed in betting. Claudia has growing platforms on multiple social media channels and can play the role of host or analyst with her knowledge. Her potential stood out to us after interviewing several women candidates for the role.”

This is just the latest move for Blue Wire. In the last year-plus, they’ve also partnered with Grant Wahl for a long-form series on Freddy Adu (which earned Webby and Hashtag Sports award nominations), added Haley O’Shaughnessy from The Ringer as their first full-time podcaster, raised $5 million in Series A funding in December, hired marketing executive Casey Reed from Hulu, and teamed with INFLCR to provide NIL-compliant podcasting opportunities to NCAA athletes. They’ve also launched a slate of narrative podcasts, and now they’re launching these particular betting-focused podcasts, with more to come. We’ll see what else lies ahead for them.