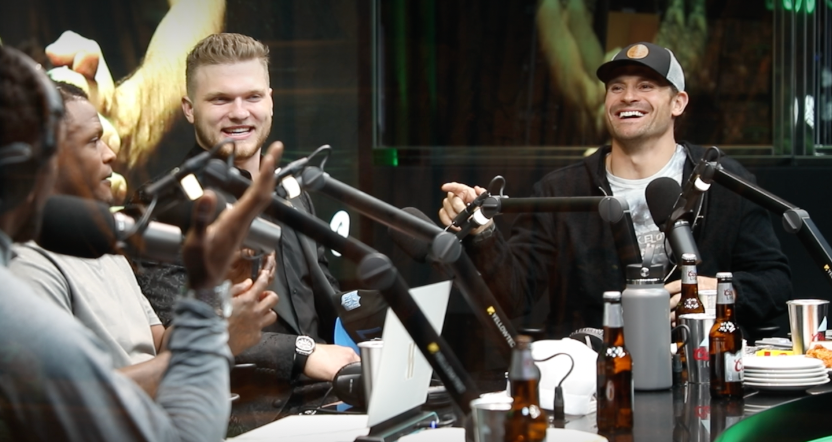 Last year, Blue Wire Podcasts teamed up with Wynn Resorts and WynnBet for a wide-ranging partnership, including a Blue Wire studio at the Wynn Las Vegas. That studio has since come in very handy for the company on multiple fronts; they now have seven current podcasts regularly recording out of there, they’ve had Las Vegas Raiders’ players Maxx Crosby and Darren Waller coming in to record content for podcast series set to debut this summer, and they’ve done advertiser partnerships that combine ads on their podcasts with display advertising in the studio.

One of the most notable partnerships there was with Coors Light during the NFL Draft in April. With the draft in Vegas, the brand signed up for a partnership that included sponsorship of 20 Blue Wire NFL podcasts, plus display signage in Blue Wire’s studio. That studio was a key during-draft location for them, with Chris Long in particular (seen at center above) recording his “Green Light” podcast live from there and having NFL guests stop by, including No. 2 overall pick Aidan Hutchinson and former Patriots’ receiver Julian Edelman. Blue Wire founder and CEO Kevin Jones spoke to AA via email this week about how that studio is working less than a year in, and said having that space during the draft was massive for them.

“It was a game-changer for us,” Jones said. “Aidan Hutchinson stopped by 45 minutes after he was drafted. Julian Edelman stayed for close to an hour. Arik Armstead, Charles Tillman and Will Blackmon [who hosts a podcast for Blue Wire] were here for the livestream. Outside of ESPN and NFL Network, we felt like Blue Wire had some of the best coverage of the NFL Draft, and we couldn’t have pulled it off without the studio.”

The NFL draft obviously isn’t going to be in Vegas every year, but the city does have a fair bit of regular sports action. That includes the regular fan traffic it gets during March Madness, the Raiders now playing there, the upcoming F1 race, the annual NBA Summer League, and the rumors about NBA or MLB teams someday making their home there. Jones said Vegas was the perfect studio location for an up-and-coming sports media entity like Blue Wire.

“We can stand out in Las Vegas. All of our bigger competition have space in New York and Los Angeles. Vegas is increasingly becoming a central geography to the sports world for big events.”

Jones said that studio space (overseen day-to-day by Jordan Harris, the general manager of Blue Wire’s partnership with Wynn) has proven useful on multiple levels, from the ease of recording there for Blue Wire talent to the ability to have prominent guests stop by.

“We have producers making life very easy for the podcasters on the ground in Las Vegas. Recording from home all the time can get a little restless. Plus, you never know who is going to be in the studio: athletes and celebrities stop by routinely and pop on as guests.”

And Jones said the ability to offer display ads there (seen by both people passing through the Wynn and through those watching video feeds of these podcasts), plus even product placement on video feeds (as seen in the Coors Light on the table in the top image), has a lot of benefits for advertisers over an audio-only podcast ad setup. He thinks that helps differentiate Blue Wire’s advertising opportunities from those offered by their competitors.

“We want to be leaders in what we’re calling ‘Audio Plus,’ where podcast ad reads are the meat of a package for Coors Light, but they’re also getting elements of social, in-person and even custom segments inside the podcast. Ad reads, no question, are the core business at Blue Wire, but we’re innovating with advertisers like Coors Light who understand the content and audience can go further than just the podcast.”

He said the ability to sell in-studio advertising also helps boost their plans for specific studio takeovers around key sports moments. They have current ones planned for NBA Summer League, the English Premier League kickoff in August, and multiple NFL events, and more may follow. Jones said a central physical location and physical signage is a big help in pitching advertisers on the idea of sponsoring a takeover.

“We create sales decks and one-sheets and reach out to advertisers we have good relationships with to let them know what’s coming and how great it worked with Coors Light. We want the takeovers to get more and more ingrained. Whether that’s a Crypto seminar with Duncan Robinson or Richard Jefferson or Wendy’s breakfast. There’s a lot more brands who could be tapping into the reach of our studio and podcasts together.”

Blue Wire is an interesting company, as in addition to national podcasts like Long’s, they put a lot of focus on the team-specific. They currently offer 250 podcasts, with many of those focused on a particular sports team (some even in partnership with local newspapers). And they’ve even moved beyond the purely sports realm, with 15 current comedy and culture podcasts, including ones on dating, relationships, Dungeons and Dragons, chess, sports movies, and the worst parts of sports/pop culture/historical events, plus business and fitness podcasts. Jones said that breadth is quite helpful for them, allowing brands that work with them to more specifically target fans of particular teams or podcasts.

“If you think about most of our competition, they are all national talking heads. Bill Simmons, Colin Cowherd, Dan Le Batard — they probably talk about your favorite team or topic once every few weeks for a few minutes at a time. And even though they all have podcast networks, almost all of their audience reach is from one show. We’re saying sports fans are a little sick of the same talking heads and we have some of the best individual shows across topics. Brands are choosing us because they are understanding the dynamic of the new sports fan.”

Jones said Blue Wire’s revenue grew from $1 million in 2020 to $4.9 million last year, and they’re projecting revenue of $10 million (as well as 140 million cumulative downloads) this year. He’s optimistic about where Blue Wire can go from here.

“We are one of the only media organizations in the world who believes creators will own their intellectual property in the future. Most media organizations try and own all the IP. This dynamic is an early advantage we’ve arrived to and it allows us to build trust and scale year-over-year with really good podcasters. Our plan is to keep giving creators really fair deals. 15% of our content is now sports-adjacent. We have Dungeons & Dragons, we have chess, we have business, we have fitness. Blue Wire will always be sports-led, but it’s becoming the home base for niche podcasters overall.”