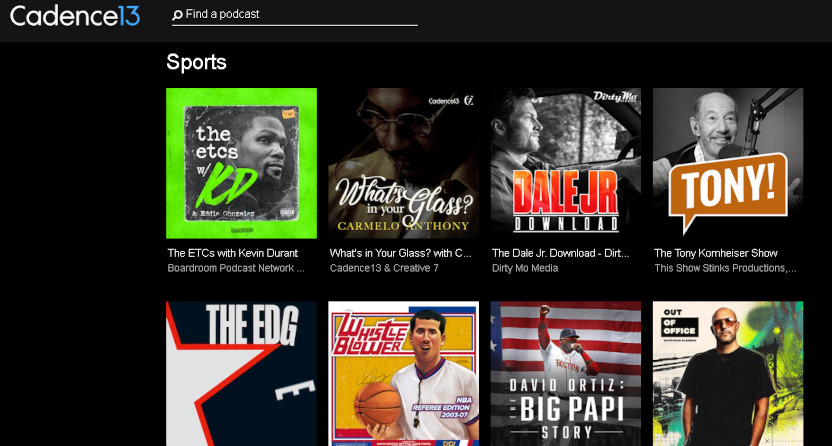 There might be a notable change ahead for the sports podcasting landscape. In 2017, prominent radio station owner Audacy (which was then called Entercom) paid $9.7 million for a 45 percent stake in the podcast studio then called DGital Media, which renamed itself to Cadence13 after the deal. In 2019, the company bought the remaining 55 percent of Cadence13, in a deal that reportedly valued the studio at close to $50 million. Now, as per Sara Fischer at Axios, Audacy has retained bankers to explore a Cadence13 sale:

This could be a big move on the sports side. Cadence13 has prominent personalities in many genres, including Dana Carvey and David Spade’s Fly on the Wall in comedy, Peter Hamby’s The Powers That Be Puck podcast in news, and Adam Scott and Kate Mara’s Ghostwriter in fiction, but their sports side has an especially large lineup of recognizable names.

A few of the many notable people who have done sports shows at Cadence13 include Kevin Durant (The ETCs with Kevin Durant), Rich Kleiman (Boardroom Out Of Office), Dale Earnhardt Jr. (The Dale Jr. Download), Carmelo Anthony (What’s In Your Glass?), Tony Kornheiser (The Tony Kornheiser Show), Kenny Mayne (Hey Mayne), Richard Deitsch (Sports Media With Richard Deitsch), and many more. And while it’s not a sports show itself, they recently launched sports personality Stephen A. Smith’s news/politics/culture podcast Know Mercy. So any change in ownership for Cadence13 is going to impact the sports podcasting landscape. Here’s more from Fischer’s piece on what’s going on with this sale evaluation:

Audacy, the publicly traded radio and digital audio company, has hired bankers as it looks to sell Cadence13, one of its two podcast studios, three sources familiar with the process told Axios.

Why it matters: Offloading the studio could help alleviate some of the company’s debt as it faces financial challenges.

The company’s share price closed at an all-time low Friday at 39 cents. Audacy risks being delisted by the New York Stock Exchange if its share price doesn’t increase in the next six months.

…Details: The company has hired Evolution Media Capital, a boutique investment firm that focuses on deals in sports, media and entertainment, to help shop the deal.

Sources say the company has pitched the studio to most of the major audio giants.

For the record, Audacy’s official comment to Fischer was “We don’t comment on rumors of this nature” and “We remain absolutely committed to the growth of our podcasting business, as demonstrated by the investments we’ve made in our studios, content and talent.” But it certainly does sound like there’s something to them at least exploring a sale. And that could reap rewards for them, with Fischer saying they’re hoping to get at least $100 million in any deal. And any deal here could shake up the sports audio space.