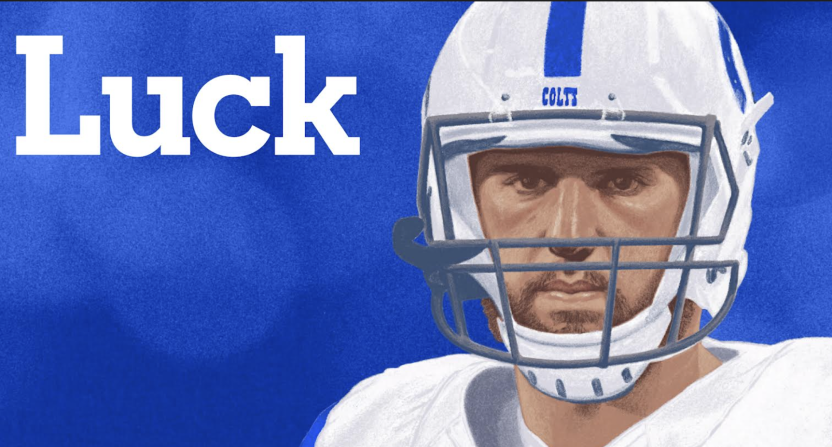 Go listen to the Andrew Luck story as you've never heard it before. https://t.co/8EhoSUHiq6

What’s It About?: The Indianapolis Colts will have a new starting quarterback this season for the fifth time in five years. It’s a stunning change of modus operandi for an NFL franchise that defined the term “quarterback stability” for the better part of the 21st century. After Peyton Manning’s Hall-of-Fame run as the face of the franchise ended in 2011, Andrew Luck was drafted as the heir apparent who was supposed to usher in another decade-plus of top-tier quarterback play and continue Indianpolis’s run as one of the league’s top franchises.

Instead, Luck, a sure-thing No. 1 draft pick, saw his NFL career ravaged by injury after injury until he shockingly retired before the 2019 season at the age of 29, just after being named Comeback Player of the Year.  It was a stunning end to one of the most promising quarterback careers in NFL history and changed the entire trajectory of the Colts since. Never one for the media spotlight, the Stanford grad also seemingly vanished into the ether, rarely ever seen or heard from.

“Luck” is about attempting to understand who Andrew Luck is, why his NFL career was so hyped, how it ended so abruptly, and who the man is behind that decision.

Who’s The Host?: The Athletic Colts reporter Zac Keefer, who has covered the franchise for years, including many of Andrew Luck’s seasons with the franchise.

The Andrew Luck story … as you've never heard it.

How — and why — the greatest QB prospect in a generation ended up walking away before he was 30 years old:

What’s It Like?: [NOTE: This review is based on the first two episodes only] Luck is an exhaustive recap of Andrew Luck’s entire career as seen through the eyes of those who played with him, coached him, covered him, and otherwise were a part of his story one way or another. Luck himself doesn’t speak on the record for the podcast (at least not as far as I am aware) but it does include interviews with people such as Tony Dungy, Bill Polian, Chuck Pagano, David Shaw, Bruce Arians, Chris Ballard, Robert Griffin III, and Jacoby Brissett. If there is a facet of Luck’s life that is notable, there’s a notable voice telling you what it was like to be in his periphery.

Luck himself is an enigma. And unfortunately, the fact that he doesn’t speak for himself on the podcast feels like a real hindrance to that point. There is a lot of talk about how good Luck was as a quarterback, competitor, and football mind. An exhaustive amount of talk, to be honest. But at a certain point, you kinda feel like “okay, we get it, Andrew Luck was an amazing quarterback, but who is he, really?” And perhaps that question gets answered as the podcast goes on, but, without Luck sharing his own insight into what it was like to be the child of an NFL quarterback, a Stanford football prodigy, and the heir apparent to Peyton Manning’s NFL crown, it lacks that central core that gets at the heart of why we are curious about him.

The first half of the second episode details the end of the Peyton Manning era in Indianapolis, before transitioning into the discussion around Luck’s inevitable drafting to replace him. To be entirely honest, that was the most interesting portion of the podcast that I listened to and it left me wishing this was more akin to Wondry’s Sports Wars series about Brett Favre and Aaron Rodgers. Because as soon as we transitioned back to people talking about how great Andrew Luck was, it felt a bit more perfunctory.

What makes Andrew Luck fascinating was the way that he seemed to revel in his stature as an NFL quarterback but also recede from that spotlight whenever possible, and quite literally so once he retired. The fact that he appears to be at peace with that decision is what we want to understand more than anything. The episodes I listened to were a nice trip down memory lane but I didn’t really feel like we got to the heart of the matter. Perhaps that happens later on.

How did the greatest QB prospect since John Elway end up walking away from the game before he was 30?

"Luck" is the Andrew Luck story as you've never heard it, hosted by @zkeefer.

Look for it on The Athletic Football Show feed on July 11, wherever you get your podcasts. pic.twitter.com/5ka9Wz86fy

Who Is It For?: Any NFL fan who remembers that moment in 2019 when they heard Luck was retiring will probably be interested in revisiting that and digging into his story. There are certainly more than enough notable voices here to make it a fun listen to football die-hards. It also captures a very unique moment in time for college football and the NFL, including Jim Harbaugh’s stint leading Stanford and the end of the Peyton-Colts era. Also, anyone who saw Andrew Luck at the 2022 National Championship Game and wondered what he’s up to will want to give a listen.

Who Is It Not For?: If you don’t have much of a connection to Luck’s story or remember his time in the NFL, I don’t know how much you’ll find to hold onto here. At least in the first two episodes, it’s a lot of people telling you how amazing someone else is, so if you aren’t already intrigued by that figure from the jump, that’s probably not going to hook you for too long.

Where Should I Start: This six-part series dropped on Monday and you’ll want to start at the beginning.

So, Should I Listen To This?: I think the answer to that question comes from how intrigued you are by the Andrew Luck story beforehand. You’ll know by the end of the first episode if you want to continue on the journey. And if you’re hooked, that’s great.

In a way, the fact that Luck sat down for a 90-minute interview with Keefer but asked that it be kept off the record feels like exactly what you’d expect from him and tells us so much. Unfortunately, it’s also the decision that might keep the series from providing the answers that the audience most wants to hear.