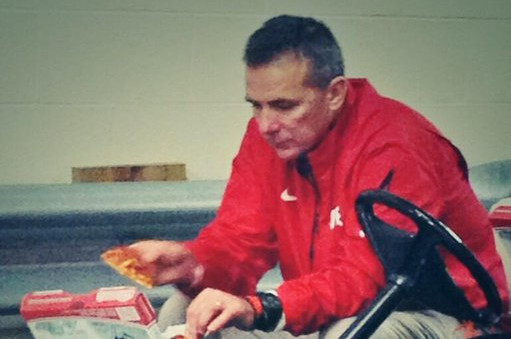 There’s been a whole lot of discussion of Jacksonville Jaguars’ head coach Urban Meyer’s trip to a restaurant and bar he co-owns in Ohio last week following his team’s loss to the Bengals (to drop to 0-4) and his decision to not return to Jacksonville with them afterwards. That includes his attempted  (and refuted) explanation, players’ reactions, a statement from Jaguars’ owner Shad Khan, and discussion of how this looks in light of Meyer’s past comments on struggling teams. But something that maybe hasn’t received enough attention is how this has fit into other past accounts of post-loss behavior from Meyer.

Interestingly enough, there were two particularly significant examples of that recently from different podcasts. And of particular note, both of those came out before the Friday incident here and the Saturday spread/discussion of it. The first was on the Glory Days: Dreams and Nightmares podcast from former Ohio State players Joshua Perry (who’s already used that forum to bash Meyer’s driving and seeming disregard for getting pulled over) and Evan Spencer. Here’s Perry (seen at right above) discussing his experiences with Meyer after a loss. This clip was posted the preceding Saturday, Sept. 16:

“Winning—it doesn’t matter how—it’s the greatest thing. He is going to let you appreciate it for what it is. We come in after a loss, you can just look at him and he’s a different person. He’s pale as a ghost. His mouth is dry. He’s pacing back and forth. He’s rubbing his head. Got his hands on his hips. Everything to let you know how exhausted and exasperated he is.”

“He doesn’t know how to compute. He makes remarks to the team like he would do typically, ‘I guess we just lost that game. We just lost. They played better… We’ll play in the BCS Orange Bowl probably. Orange Bowl is a good bowl. Down in Miami. Miami is a nice city. Not a national title. Maybe we’ll win one, maybe we won’t. One of these days. Not this year.'”

There are plenty of stories of coaches and players who take losses hard, but even by those standards, Perry’s discussion of Meyer’s past behavior here feels like Meyer went beyond the norm. And it’s again notable that this came out long before any of the discussion of Meyer’s behavior after the Bengals’ loss; hell, it came out almost a week before that loss. It’s also notable that we have some past public evidence of Meyer acting somewhat oddly after a loss, including the famous 2013 “sad pizza” picture of Meyer eating Papa John’s pizza in the bowels of Lucas Oil Stadium after a Big Ten title game loss to Michigan State:

Eating cold pizza in the bowels of Lucas Oil Stadium while seated on a golf cart: No one's idea of fun. pic.twitter.com/HMSSXLnDDr

On its own, that’s just a meme, and just something to laugh about. But it’s interesting that we don’t get these kinds of shots of many other prominent coaches, and it’s interesting that Meyer would choose to be apart from his team (and yet, visible to the public, or at least the media) after this kind of loss. And that certainly fits into what Perry is talking about here. And, as with some of the other discussion around this latest case from Meyer, none of this would be much of a thing if he hadn’t so long and so prominently claimed to be a better leader than anyone else, as with his 2015 Fox News interview with Bill O’Reilly about his leadership book and with his 2020 Fox Sports segment on “criteria to examine for struggling teams”:

Beyond that, Perry’s comments weren’t the only ones from a recent podcast that raised some questions about Meyer’s behavior after a loss. And the next one dates back to the school he was at before Ohio State. The C13Originals It Was Said: Sports series (hosted by Doc Rivers) recently did an episode on Tim Tebow’s famed September 27, 2008 “Promise” speech following a Florida loss. (That’s interesting in its own right, as one of the many notable recent criticisms of Meyer beyond the bar incident is the way he brought in a  player long out of football in Tebow to compete for a roster spot at tight end, which didn’t go well.) And Meyer was one of the people interviewed for that episode, and some of what he had to say is quite interesting:

“The next morning I woke up and obviously don’t sleep well after a loss. I come in the morning early and it’s Sunday and I come up and at 7:00 AM a guy named David Nelson is sitting there. And David Nelson was a classic underachiever. He’s a guy that had talent, didn’t work real hard, was lazy, excuse-maker. Came from a good family and obviously ended up having a great career. But he came in and I was on this guy really, really hard. And I come walking up and he’s sitting there, tears rolling down his cheek. And I was like, ‘What’s your problem?’ Because I was really upset with some of the players, especially the ones who weren’t contributing.”

“And I said, “Well, come in my office.” I say, ‘What’s your problem?’ And he said, ‘Coach, Tim’s speech got to me.’ He goes, “Everything you’ve said to me, I have to help this team. I’ll do anything.” I said, ‘David, that’s not real hard to say, that’s real hard to do it.’ David Nelson went on to become one of our most important players that year. He’s the guy that when Percy Harvin got hurt near the end of the season, caught a touchdown pass against Alabama in the SCC Championship Game. He’s the guy that caught the final jump pass against Oklahoma in the National Championship Game because we trusted him that much. And it was because of Tim’s words. Tim impacted him.”

On the surface, that’s not all of that exceptional of a quote. But it’s fascinating that Meyer, a guy who has made a career out of the “leadership” and “inspiration” he brings to the table (he’s widely been praised for that and for his recruiting abilities rather than Xs and Os acumen, either offensively or defensively) admit he’s actually a cynic not usually motivated by speeches. And the “I obviously don’t sleep well after a loss” remark is also perhaps notable. Yes, of course, most coaches are hardly going to say they went home and slept like a baby after a loss. But Meyer’s comments here perhaps are a further suggestion that he’s long taken losses harder than many of his colleagues, and that’s interesting information around this week’s events.

A big part of what’s so notable about the current discussion around Meyer isn’t actually about anything he did at this bar. If this was simply about Meyer’s relationship with his wife, a lot of that wouldn’t necessarily be a huge deal for the public. But beyond the problematic things Meyer did in videos here, this case stands out because of everything else in Meyer’s Jacksonville tenure so far, as Lindsay Jones of The Athletic laid out well Monday.

That includes hiring and then parting ways with controversial former Iowa strength coach Chris Doyle, bringing in Tebow, giving top draft pick Trevor Lawrence less reps than normal thanks to a “competition” with Gardner Minshew, and more. And Meyer has a past beyond that, especially when it comes to his “memory loss” handling of domestic abuse allegations against Zach Smith (a long-time Meyer assistant at Florida and Ohio State), and to his inaccurate press conference comments about that. And all of that is feeding into the calls for his job. So it’s certainly interesting to see some pre-event podcasts with some discussion of Meyer’s past behavior after losses.

[Glory Days: Dreams And Nightmares on YouTube, It Was Said: Sports on Apple Podcasts; sad pizza photo from Pat Brennan on Twitter]