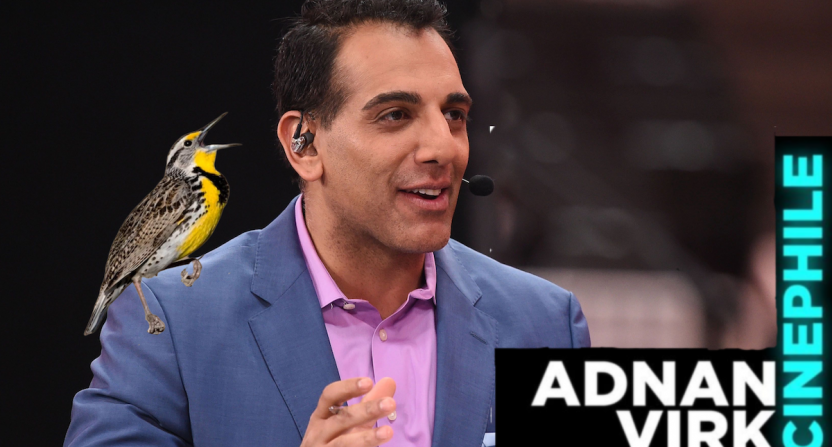 Most of Meadowlark Media’s recent additions might include big names like Jemele Hill, Mike Schur, and Adam McKay, but the projects they’ll be working on have yet to be developed. So the new content venture from John Skipper and Dan Le Batard probably needed to add some established properties to its roster of talent.

One of those shows was announced on Wednesday morning with Adnan Virk bringing his popular “Cinephile” podcast to Meadowlark. He’ll become a regular contributor to Meadowlark as of July.

Virk appeared on Le Batard’s “South Beach Sessions” to talk about the move, his podcast, and his long path to a broadcasting career.

“Of all the things I’ve done in my career, working at ESPN or MLB Network or DAZN or The GM Shuffle, my NFL pod, Cinephile might be the one I take the most pride in,” Virk told Le Batard. “You hear that expression often, ‘a labor of love.’ But there’s no laboring here. It’s all love.”

Related: Michael Lombardi and Adnan Virk have a new “The GM Shuffle” podcast, breaking down the draft, Jeffery Simmons and more

Virk has produced Cinephile since 2016, which includes deep discussions on awards contenders and blockbuster releases, TV shows, interviews with actors like Robert De Niro and Mahershala Ali, chats with filmmakers and critics, pertinent industry news, and rankings such as “best Kevin Costner films.”

“I’ve been told by people who know such things that Adnan Virk has as much range as anyone in broadcasting, but I’ve simply never liked him,” Le Batard said in the official statement announcing the move.

“That polish and happy energy is annoying and … what? We did what?!? What do you ‘mean’ we hired him? How did he breach Meadowlark security? How was this done without my knowledge?”

In addition to Cinephile joining the “Le Batard and Friends” podcast network, Virk will also appear on The Dan Le Batard Show with Stugotz and presumably won’t be kept on hold for 20 minutes as he has in the past or have to sneak onto the show.

After leaving ESPN in 2019, Virk has worked for MLB Network and NHL Network, as well as DAZN and the Cadence13 podcast network. Working under Skipper at ESPN and DAZN, and appearing on Le Batard’s show, it was surely natural that he’d join his former boss and colleague in their new venture.

“Adnan is a unique talent – the kind of broadcaster who can thrive in any sport and in any environment,” said Skipper in Meadowlark’s statement. “We’re thrilled for the opportunity to welcome a friend who offers a diverse voice and shares our desire to create high-quality content that pushes beyond the boundaries of sports.”

Related: Adnan Virk – “I’m hurt that I was that replaceable for doing something I thought was relatively benign.” By ESPN’s standards, he’s right.