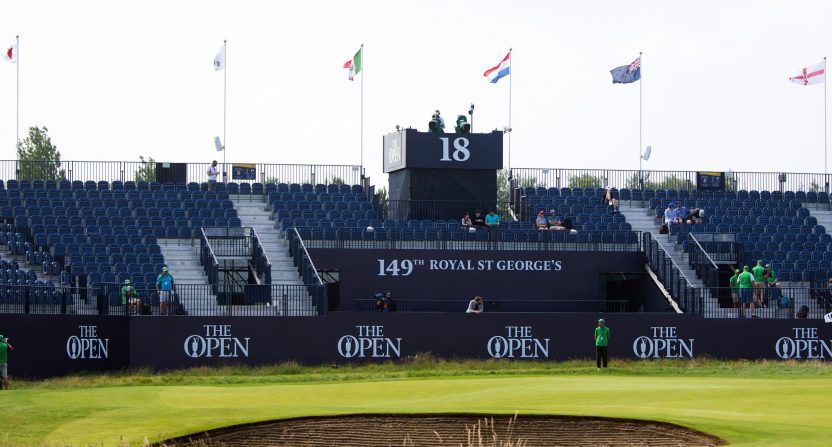 NBC’s U.S. Open coverage was less than a month ago, but they’re back at it again this weekend with the Open Championship at Royal St. George’s in England.

The Open is the last major championship of the year, and NBC’s last major until next June, so it’s the last chance for any golf presentation tweaks or innovations for a while. That presentation certainly had its flaws at Torrey Pines in June; things will look at least a little different by necessity this week with NBC using the world feed, and hopefully some other changes are made as well (crossing fingers for constant leaderboard.)

One thing that does help fix an issue that only really affected the diehard golf audience: Peacock will now be simulcasting all coverage throughout the week. That’s in addition to the exclusively streaming windows and featured groups coverage, and it’s a change from Torrey Pines, when Peacock didn’t offer a network stream on the weekend. From NBC’s release:

For the first time, fans can stream the entire tournament on Peacock, including eight hours of exclusive coverage. All NBC and GOLF Channel tournament coverage will also stream on NBCSports.com and the NBC Sports app.

Over the course of the week, more than 30 on-air talent across NBC Sports and Sky Sports will provide live coverage, including featured groups, studio and news coverage across NBC, GOLF Channel, and Peacock.

This solves a few problems. For one, if you’re a paying Peacock subscriber, you can now watch the entire tournament, even if you don’t have any other television subscription or the ability to watch via over-the-air antenna, and you can do it all in one app. That’s a big deal, and is a very solid value-add for subscribers.

It’s the all-in-one place aspect that helps solve a problem for die-hard fans, too. We wrote this after the U.S. Open:

The constant switching between Golf Channel, NBC, and Peacock was really weird throughout the week for a major. Obviously NBC is looking to push Peacock as much as possible, but it still led to a frustrating experience if you wanted to really settle in for any length of time.

Having the ability to watch all of the possible coverage within one app is a big win. It’s what ESPN used to do, too, back when they had the Open. They also offered the Sky Sports feed as a separate channel, and it was glorious. So, thanks for finally doing this, NBC; it should have been done already, although perhaps they were concerned about cannibalizing network ratings. Now, though, we’re in an era where the actual ratings data is often hard to come by, and networks just include their streaming numbers in a total viewership calculation anyway to offer the most impressive-sounding figures, so here we are!

Obviously this is only for paying customers, but if you’re paying to watch the Peacock to watch the Open in the early hours of the morning you’re probably squarely in the diehard demographic that would rather not chase the coverage around various apps and channels. (The Peacock stream quality is typically excellent, too, and looks fantastic on high-resolution monitors and televisions, a big win for what is annually one of the more aesthetically interesting championships in golf.)

So, hey, this is a good and logical step. Credit where it’s due; they either listened to a complaint or realized that it could be easier, and made the change quickly for their next big men’s golf major.

If they add a constant leaderboard we’ll really be in business.