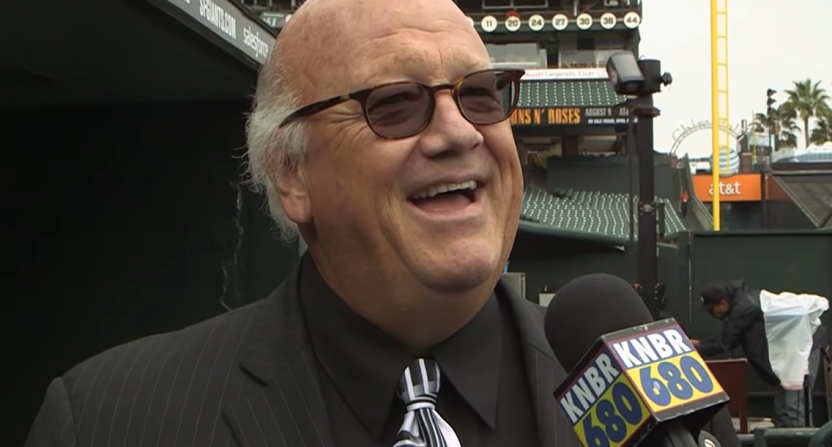 This Sunday will offer a familiar presence for national baseball fans: Jon Miller in the booth.

The legendary Giants broadcaster will be filling in for Peacock’s MLB Sunday Leadoff coverage of Giants-Reds, pulling substitute duty for Jason Benetti due to conflicts with Benetti’s White Sox schedule.

Miller will be joined in the booth by Reds legend Barry Larkin and ex-Giants pitcher Shawn Estes, part of Peacock’s plan for rotating analysts with ties to the teams on the field every week.

Via the official release:

Joey Votto and the Cincinnati Reds host Brandon Crawford and the San Francisco Giants from Great American Ballpark on MLB Sunday Leadoff live this Sunday, May 29 at 11:30 a.m. ET on Peacock.

In addition to his decades of Hall of Fame-caliber work with the Giants, Miller is known for his long run as the voice of ESPN’s Sunday Night Baseball. His work on that broadcast with Joe Morgan might not have been pleasing for anyone with an analytical bent by the end of their run, but if you ignored the actual content of Joe Morgan’s analysis and just focused on how that pairing sounded, it was incredible.

In fact, separating out my own fandom from the equation, I’m not sure a voice takes me back to a time and place growing up more than Jon Miller, who was basically the key voice on the soundtrack to Sunday evenings in the summertime in my family’s house. Obviously the Sunday morning Peacock game isn’t exactly the same as Sunday night in primetime on ESPN, but it’s still nice to have Miller back on a national call.