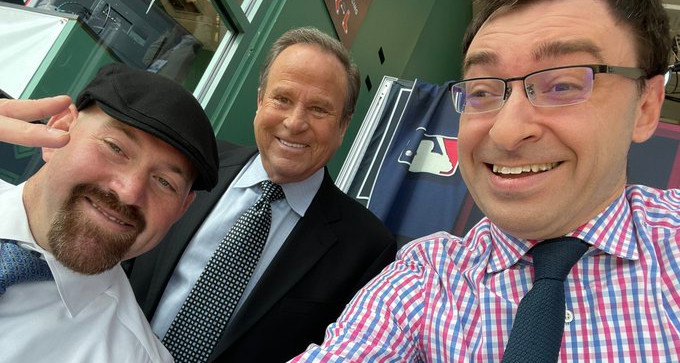 Peacock’s MLB Sunday Leadoff exclusive Sunday morning/afternoon window begins today with the Chicago White Sox against the Boston Red Sox, and ahead of that, several of the figures involved spoke to media on a conference call this week. One particularly notable remark came from play-by-play voice Jason Benetti, who will be calling this package alongside rotating analysts with ties to each team (starting with Kevin Youkilis and Steve Stone this week, seen above L to R with Benetti). Asked how he plans to make that work, Benetti brought up Curb Your Enthusiasm:

I watched a ‘Curb Your Enthusiasm’ episode from either last season or the season before where they were having a dinner party, and there’s this whole discussion about who’s the best dinner party middle, who the best person is to sit in the middle of the table to keep the conversation going.

I think all of us aspire to be that at dinner parties if we’re at all an extrovert, even a little bit.

I think in my understanding of people, like I’ve done a lot of games with a person once, and the way I see it is when you sit down to do a game, the audience does not care at all if you’re best friends with somebody or if you just met them for the first time. And so it’s on us, it’s on me, it’s on everybody in the booth, to understand each other and maybe have a meal before the game or talk on the phone or whatever.

But I think it’s really important that everybody in the booth shines in the best way possible, so it’s on me and everybody else with our production crew to understand very quickly the wheelhouse for each analyst.

That seems like a great approach for a play-by-play voice in general, but perhaps especially when working with two different analysts who don’t have a lot of history together. Here’s the scene Benetti is referencing, from Curb season 11 episode 3, “The Mini Bar,” which premiered on HBO last November. The “best middle” talk starts around the 2:50 clip of this scene, after the dinner party is initially let down by poor middling. (Language warning.)

And after Benetti’s comments there, NBC Sports executive producer Sam Flood said Benetti’s ability to keep those conversations going is a big part of why they chose him for this role.

There’s a reason we picked Jason. We did our homework. We know him. We love what he does, and we think he’s the perfect person to be in that middle seat at the dinner party.

We’ll see how Benetti does in that metaphorical middle seat today, and over the course of the season.