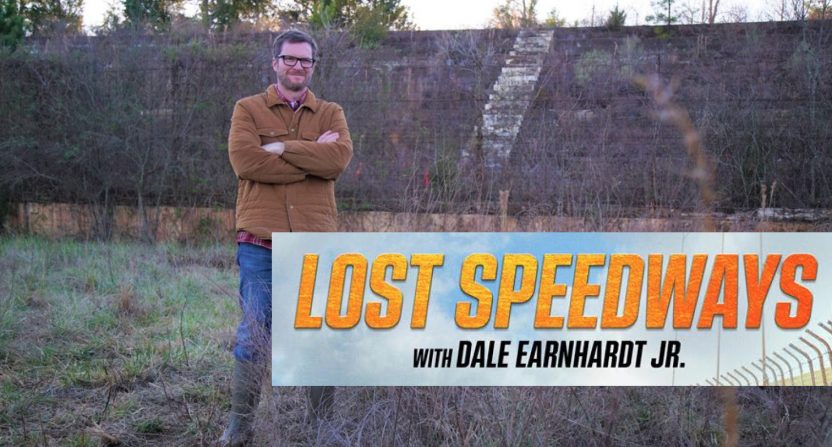 Sports documentaries provide an excellent platform for telling stories and informing audiences about the past, whether they chronicle an event, an athlete or team, or a particular moment in time.

People are often integral to these films, central figures to build a story around. But what about places? That’s the focus of Lost Speedways, a docuseries hosted by Dale Earnhardt Jr. which looks at abandoned racetracks around the United States. The series is produced by Earnhardt Jr.’s Dirty Mo Media company. Season 2 debuts July 1 on Peacock.

As you might expect, most of the racetracks Earnhardt Jr. and co-host Matthew Dillner visited for Season 1’s eight episodes were in the South, throughout North Carolina and Georgia. Season 2 expands the scope of the show, going to Texas, New England, West Virginia, and Florida.

Check out the trailer for Lost Speedways, Season 2:

“The fan response from Season 1 was too overwhelming to stop,” said Earnhardt Jr. in the official announcement from Peacock.

“Our goal for Season 2 was to broaden our footprint. We did that with trips into New England, Texas, West Virginia and Florida. This new run of episodes features amazing tracks, incredible stories and legendary racers. My Dirty Mo Media crew did an outstanding job capturing the essence of these old speedways, and I had a blast exploring them.”

I created a google map image of where Riverside International Speedway used to be. It was built in 1957 and held Cup races until 1988 when it was cleared for development. I was lucky enough to go to one of the final events. #LostSpeedways pic.twitter.com/62fk3DSjxE

Related: Dale Earnhardt Jr. discusses his role at NBC, how he preps for each broadcast, and his upcoming book

What makes each episode of Lost Speedways particularly compelling is that the deserted racetracks Earnhardt Jr. and Dillner visit still exist. They haven’t been replaced by parking lots and office parks, or left as patchy grass fields.

The scenery is intriguing and haunting with empty, crumbling grandstands and the faded raceways. The narration and storytelling help to imagine what once was with spectators in the stands and cars racing around the tracks.

Lost Speedways premieres on Peacock July 1. Season 1 of the series is also available for streaming on the platform.