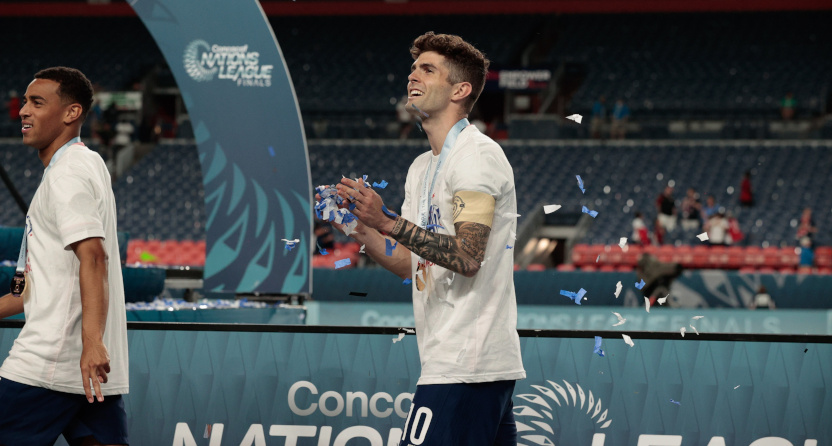 The divide between cable network distribution and streaming service distribution is shrinking, but it still matters in some cases, and there are still plenty of people upset when something’s only on a streaming service (as we saw with some of the Peacock Olympic content) rather than on traditional cable networks. The latest case where this might be an issue is for the U.S. men’s national soccer team’s World Cup away qualifying matches this fall, with two of those three matches airing only on Paramount+ (the other one will air on Paramount+ and CBS Sports Network).

The USMNT will be taking part in the final stage of CONCACAF (North and Central America and the Caribbean) qualifying (which involves 14 matches per team between September 2021 and March 2022). The U.S. roster was announced Thursday, including Christian Pulisic (seen above after the team’s June CONCACAF Nations League win). ViacomCBS won the rights to much of that qualifying, including the U.S. away matches in March, and did so under the Paramount+ brand. The home matches, including the Sept. 5 one against Canada, the Oct. 7 one vs. Jamaica, the Oct. 13 one vs Costa Rica, and the Nov. 12 one vs. Mexico, will be broadcast by Fox or FS1.

So it’s been clear for a while that a lot of these away matches were headed to streaming (that article stated that “Up to 79 matches will stream live on Paramount+, which has rebranded from CBS All Access. The CBS Sports network also has the ability to air select fixtures on its linear platforms”). So the actual revelation of the plans to put most of this qualifying on Paramount+ (CBS made that announcement Thursday; that release also includes the broadcast teams, for those interested) isn’t all that surprising, but the details of what’s only airing there are notable, especially (for a U.S.-based audience) when it comes to the U.S. and Mexican teams. Here’s the schedule for those teams  (all times Eastern):

So, in order to watch most of those matches (and every match involving neither the U.S. nor Mexico), you’re going to need Paramount+. And that fits with ViacomCBS’ soccer-heavy strategy at Paramount+, which has also added Champions League, Serie A,  Scottish Premier League, and CONCACAF Nations League rights recently. (Both of those rights deals have a similar pattern, where most games are on Paramount+ and some are on CBSSN.) One nice thing with these announced matches, as with the Nations League but unlike the Serie A and Scottish Premier League ones, is that even the cable games will be airing on Paramount+ as well; that’s a big advantage for those who don’t have cable, or don’t have a package that includes CBSSN (many packages don’t).

There are a few things worth discussing with this strategy. First, it’s probably somewhat of a reduction in the numbers of people who can view the game, but it’s unclear if it will lead to a significant actual reduction of audience. This is a harder discussion to have with CBSSN and Paramount+ than just about any other cable/streaming pair, as CBSSN’s carriage numbers are often tough to come by (the most recent thing we’ve seen there is an October 2020 SwimSwam post about the International Swimming League citing undated CBS claims that CBSSN was in 44 million homes) and Paramount+’s streaming numbers aren’t broken out from other ViacomCBS services (a Deadline piece earlier this month had ViacomCBS with 42 million global streaming subscribers, but that includes those who only subscribe to Showtime’s OTT service and not Paramount+, plus a couple of smaller services, and it’s definitely not all people in the U.S., which is the relevant number for this discussion).

Thus, it seems safe to say that Paramount+ is in less U.S. homes than CBSSN is, even if we don’t know exactly how large that gap is. However, soccer’s demographics (young relative to many sports) are worth a mention here; that means more cord-cutters and cord-nevers, and less people who still have traditional cable or satellite, and that’s a big part of why many streaming services (particularly ESPN+ and DAZN at the moment, but also B/R Live a few years ago) have focused on soccer rights. And the younger demographic there is probably even more notable still when it comes to CONCACAF qualifying matches than to a World Cup or Euro tournament that draws more casual fans.

As well, it should be kept in mind that CBSSN’s subscribers are low relative to other cable sports networks; the amount of homes lost here is less notable than if something went from ESPN or TNT or FS1 to streaming. And it’s also worth mentioning that many away USMNT World Cup qualifying matches have been hard to watch in the past; beIN Sports used to have many of those rights, and some were more obscure than that. And Paramount+ seems to have more distribution than beIN had, and certainly has more than some of those other past services.

It’s also worth mentioning that this isn’t really about maximizing audience from ViacomCBS’ point of view. If it was, they would air every single match (or, at least, every match that didn’t conflict with other CBSSN programming) on both CBSSN and streaming. The big focus here is driving Paramount+ signups, which was also the focus for NBC with their Peacock Olympic strategy, and which is also the focus for ESPN with many of the various games they put exclusively on ESPN+. Of course, that’s going to come with some backlash from those who don’t have Paramount+ and don’t want it. We’ll see how large that backlash is, and what ViacomCBS decides to do on the broadcasting side for the next round of matches in early 2022.