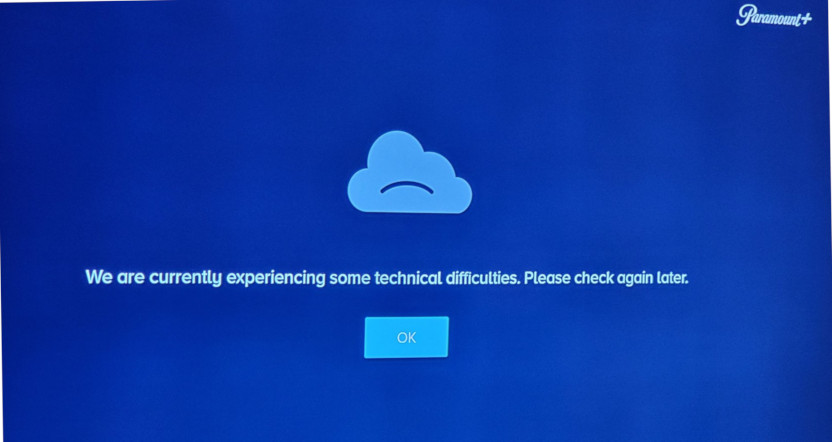 An advantage of the new NFL TV contracts that kicks in even before those deals fully do is increased ability for networks to stream games and other content on their associated streaming services, including CBS’ Paramount+, NBC’s Peacock, ESPN’s ESPN+, and Fox’s Tubi. But, as with many kinds of streaming (including virtual MVPDs; YouTube TV had its own notable issues for some viewers Sunday), we’re still seeing notable technical problems, especially during high-demand events like the NFL playoffs. And those seemed especially prominent with Paramount+ Sunday for the Bills-Chiefs AFC divisional game. Here are some of the many tweets complaining about that, including one from this writer:

"Watch our games on our streaming service," they said. At least the eighth time today the Paramount+ stream of Bills-Chiefs has crashed here. (It's fine, it loads back up, but man, it's annoying.) pic.twitter.com/iIUEHcdzMR

Crashed on me four times in the past 15 minutes

Same experience, but I'm pretty sure it cut out 16 times. https://t.co/QGvU5nsnSC

When you’re trying to watch football playoffs but paramount plus sucks. This happens literally once every 5 mins. #fixit #BUFvsKC pic.twitter.com/O1hpwuIVPk

Hey @paramountplus it would be nice if your app could work for 5 minutes to watch the NFL playoffs but whatever pic.twitter.com/klUijyZOum

Can @paramountplus please send me the @BuffaloBills vs @Chiefs via Morse Code? “Uh-oh” #BuffaloBills #BillsMafia pic.twitter.com/UM9cG1x2UH

Is @paramountplus freezing up and resetting every 5 min for anyone else? Is this normal? Or just overload because of the NFL playoff games?

What the fuck is going on with Paramount Plus? I’m just trying to watch some football

@paramountplus fix your bandwidth issues on your NFL games. I should not be freezing with a 1.2 gbyte internet speed

Anyone else having problems with their @paramountplus pic.twitter.com/0O5F4IBP8q

As noted above, this is far from unique to Paramount+. Some of the many big streaming outages we’ve covered over the years include YouTube TV, Hulu+Live TV, ESPN+, NBA League Pass, and more. But Paramount+ (and CBS’ previous streaming apps) has certainly had previous issues as well.

But overall, it’s at least somewhat frustrating that these services are often marketing themselves as ways to watch live sports without or in addition to a typical cable or satellite subscription, but still struggling with repeated technical difficulties (and ones that are widespread enough to suggest it’s not user error). If you’re going to try to convince people to pay you directly instead of (or in addition to) paying MVPDs, and citing particular live sports content as a reason to do that, it would certainly help if it wasn’t painful to watch the live sports content through your app.