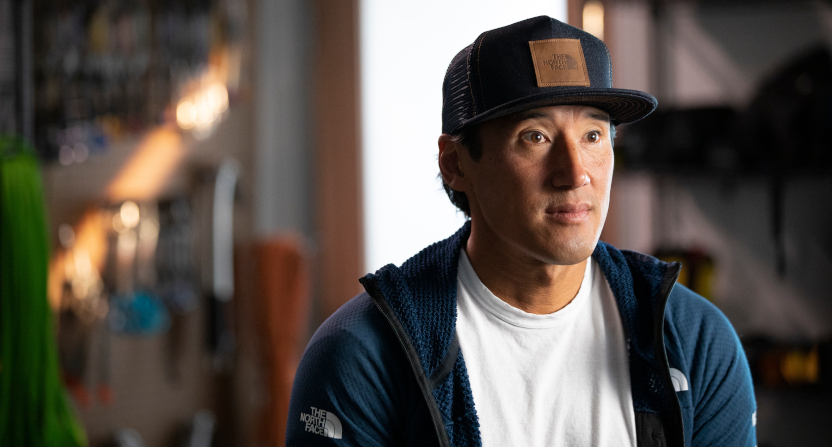 The new 10-part series Edge of the Unknown with Jimmy Chin premiered on National Geographic Channel this week, with six further half-hour episodes airing linearly over the next three Tuesdays. All episodes are also now available to stream on Disney+. The series, from wife-and-husband team of executive producers E. Chai Vasarhelyi and Jimmy Chin (who won the Best Documentary Feature Academy Award in 2019 together for co-directing and co-producing NatGeo Films’ Free Solo), looks at 10 adventure athletes and the most consequential moments of their lives, often around highly-dangerous situations.

Some upcoming episodes include “Riding The Avalanche” (snowboarder Travis Rice talking about being caught in a near-fatal avalanche), “Eaten By Jaws” (surfer Justine Dupont on a dangerous wipeout at the famed Jaws break in Hawaii), “Hunted In The Arctic” (Arctic explorer Sarah McNair Landry describing being hunted by a predator while trying to cross the Northwest Passage), and “Live Another Day” (Chin himself, who is an alpinist as well as a filmmaker, on how a class-four avalanche he was caught in changed his approach to work and life). It combines new interviews with the athletes with archival footage. Chin recently spoke to AA about the series, and said this particular approach was intriguing for him and Vasarhelyi as a way to examine how these athletes approach their craft both physically and mentally, especially around those critical high-stakes moments.

“I think I’ve always felt like there were a lot of stories about the elite athletes that were overlooked,” Chin said. “I think we’ve always seen one aspect of these professional athletes, them performing at the highest level, whether that’s with the 30 seconds they put on social media or in these kind of ski films, snowboard films, surf films. A lot of the media doesn’t really examine what it means to be an elite professional athlete. So I wanted to examine the commitment levels and the sacrifices that these athletes make, and explore their most challenging moments.”

“And I think in examining those moments you really get to see all the different layers and complexities of what it means to be the best of the best. And to just round out who these athletes are, get a different sense of who they are, what they do, how they think, what their process looks like. And I think that’s just a side of the story I feel like audiences never get to see.”

He said the mental side of this was crucial for him, as it’s something that isn’t explored as much in many outdoor film projects.

Chin is known not just for his filmmaking and for his decades contributing photos to publications from National Geographic to The New York Times Magazine. He’s also a professional skier, climber, and mountaineer, who’s led and participated in cutting-edge climbing and ski mountaineering expeditions to all seven continents, and made the first and only American ski descent from the summit of Mount Everest. So he has a long history with adventure sports as both a filmmaker and a participant.

Vasarhelyi also has history with films on these sports, and she’s worked with Chin on everything from 2015 Oscar-nominated climbing film Meru through Free Solo and subsequent projects including The Rescue, Tompkins and Photographer. Chin said their outdoor sports experience and connections to the athletes shown here gave them a sense they could get the athletes to open up, and make what they were talking about relatable to a broader audience.

“We also felt like we could bring a unique perspective to it because we have an insider view. A big part of our work is to translate this kind of insider view to a broader audience, to give context to what they’re doing. And that’s a space that we enjoy. But it’s also very challenging. We really asked these athletes to be vulnerable and talk about these moments that are really hard to talk about. That’s why it was interesting to us, because these are the stories that you don’t get to hear.”

Chin said the series worked because of the athletes’ willingness to open up to the filmmakers about what they were going through in these situations.

“These episodes in particular are very vulnerable for these athletes. And that’s something that I feel very grateful for, that they were willing to share these stories and that they’re the stories you don’t hear.”

Chin  said outdoor sports projects are interesting to him, because while the athletes involved don’t always get the recognition or attention of those in more traditional professional sports and aren’t usually performing live with millions and millions watching, they’re regularly facing a different kind of high stakes.

“They’re certainly world-class athletes. I call them more lifestyles than sports, because if you make a mistake in the NBA or the NFL, they’re not necessarily life-and-death mistakes. The realm and the world that these athletes perform in, the consequences are very high.”

“And some of them are managing with the greatest consequences of all, facing life-and-death consequences. So there’s a certain amount of commitment and intention that you have to bring to these sports that’s highly elevated by the fact that the stakes are life and death.”

Chin said those stakes led to the focus on mental preparation and motivation in Edge of the Unknown, as that’s a key part of the task for many of these athletes, but one not necessarily discussed often.

“And that’s part of the intention of this series, also to understand motivations. Because when you are engaged in a sport that really defines who you are, and that sport on a daily basis could end up being fatal, you have to look at what is the motivation at play here, where does it come from. And that’s what was interesting to me and Chai.”

A different aspect of Edge of the Unknown that took some adjustment was that each episode here is only 30 minutes with commercials (around 23 without), much shorter than many of the past projects from Vasarhelyi and Chin. Chin said that took some getting used to, but it was the right format for these particular stories.

“It was challenging. This was the first time we’ve done a shorter-format series. But I think one of the things we realized in looking at a lot of these stories, a lot of these athletes; we’re always pitched stories and athletes for longform, but not all of these stories or athletes for us necessarily land in the longform documentary. But there are extraordinary stories that are truly inspirational that fit the shorter form.”

He said that a lot of outdoor sports content is either extremely short and targeted at social channels or full-length documentaries, and he thinks this series found an interesting middle ground with the half-hour format.

“We felt like with this series, we were able to tell a lot of these extraordinary anecdotes and stories that you wouldn’t necessarily be able to see, because they require more than five or 10 minutes to tell, but might not fit a full longform feature. So this for us was great; it was the perfect format to tell the stories that you see, and introduce people to a lot of these amazing athletes. The roster we have, if you’re in the know, they are the most elite of the elite, best in class across the board. And we’re really proud of the fact we got all these amazing athletes.”

Chin said he and Vasarhelyi are thrilled with how the series turned out, and they’re excited to see how it’s received.

“We’re really proud of the series. We think it’s a really unique perspective and new point of view on this outdoor adventure world. And people will get a really different perception. The series will broaden people’s perceptions of what it is to be a professional adventure outdoor athlete.”

All 10 Edge of the Unknown with Jimmy Chin episodes are now streaming on Disney+. Here’s a full list of athletes and episodes, along with the linear premiere dates on National Geographic Channel for the last six (all times Eastern):

More on the series, and full descriptions of its episodes, can be found here.