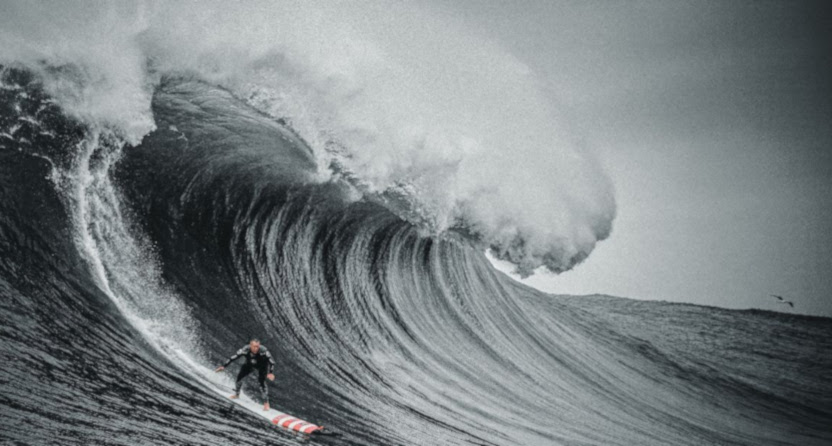 One of the best sports documentaries in the past few years was 2018’s Momentum Generation, Jeff and Michael Zimbalist’s feature-length look at a group of connected surfers, which aired on HBO that December and won a Sports Emmy for Outstanding Long Sports Documentary. HBO now has another surfing project on the way, and while 100 Foot Wave has some notable differences (it’s a six-part series rather than a single film, and it’s from a different pair of prominent filmmakers, director Chris Smith and executive producer Joe Lewis), it’s certainly interesting to see that network airing another high-profile look at surfing. This time, the story revolves around how famed big wave surfer Garrett McNamara moved to Nazaré, Portugal in 2010 in pursuit of the titular 100-foot wave, and how that wound up changing the surfing landscape. Here’s more from HBO’s release:

…After being recruited by a band of Nazaré locals who hoped to see if the dangerous swells they had observed their entire lives were surfable, McNamara – the Guinness World Record holder for the largest wave ever surfed for eight years – and his wife, Nicole, traveled to the remote city in 2010 to pursue the monster waves. Standing atop the city’s abandoned 500-year-old lighthouse, they witnessed surf more dangerous than any they had ever seen, and a possible answer to Garrett’s lifelong quest to ride a 100-foot wave. In the years to come, their journey helped attract the most fearless big-wave surfers to Nazaré and helped solidify it as the marquee destination in the sport.

Over the course of six episodes, 100 FOOT WAVE interweaves the transformative story of the seaside village with McNamara and his peers’ ongoing search for the tallest wave on the planet. The series captures the common spirit and fearless passion shared by McNamara and big-wave surfers from across the world as they push themselves through life-altering injuries and tantalizing near-misses in their collective pursuit of the inconceivable. Spanning four continents, 100 FOOT WAVE is an inspirational story of a group of people on a quest to achieve new heights, and a town and a sport that were forever changed by one seemingly impossible dream.

For those eager to get a sense of what these waves at Nazaré look like ahead of this documentary, Olympic Channel captured some nice footage of them in 2017 and 2020. The 2017 feature available on that page includes McNamara and other surfers chasing big waves, while the 2020 clip below involves a different surfer, Lucas Chumbo:

While official size reports are still coming in, it was one of the biggest waves of the entire session and a possible new world record.@wsl @lucaschumbo pic.twitter.com/hk3ibihzoN

100 Foot Wave comes from Topic Studios, Library Films, and Amplify Pictures. It will premiere later this spring on HBO and will also be available for streaming through HBO Max. This is definitely one to keep an eye on.