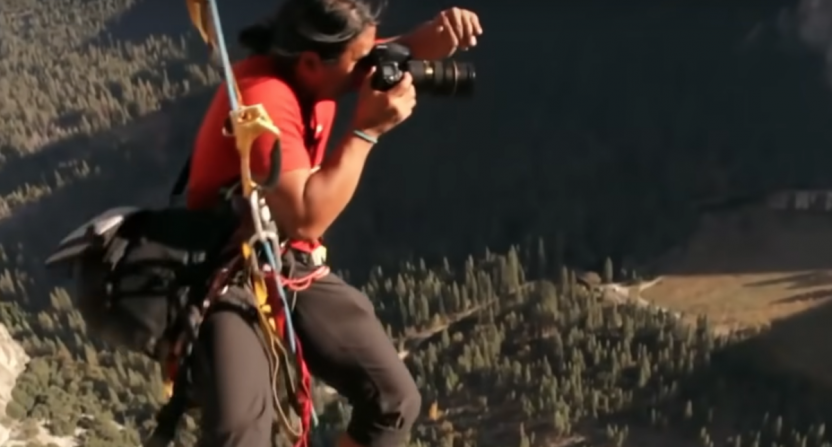 Filmmaker and photographer Jimmy Chin won an Academy Award in 2019 for co-directing the documentary Free Solo, following climber Alex Honnold’s quest to scale El Capitan in Yosemite National Park by himself with no ropes, hooks, harnesses, or other safety equipment.

But Chin is also an accomplished climber himself. Among his many expeditions are scaling Everest (and skiing down the mountain), crossing Tibet’s Chang Tang Plateau, and ascending the Shark Fin’s Route of Meru Peak. Chin documented that particular climb — his second attempt with fellow climbers Conrad Anker and Renan Ozturk — in his first film, 2015’s Meru.

Chin appeared on CBS Sunday Morning to promote his new book of photography, There and Back: Photographs From the Edge and discuss the life that led up to this documentation of his expedition career. His Chinese parents were demanding of academic and athletic success, and were disheartened when he told them that he planned to live a nomadic life to climb around the country.

“When I left college and moved into my car and started climbing full time, you know, they were extremely distraught,” Chin told correspondent Lilia Luciano. “My mom would say, ‘The Chinese language is 5,000 years old, and we don’t even have a word for what you do.'”

You can watch the CBS Sunday Morning feature below:

Though Chin has written a book of photography, there are plenty of images he wasn’t able to capture during his expeditions, simply because it was too dangerous to take a camera out.

“Often the best photos are the hardest ones to get,” said Chin. “There are a lot of images that I know and remember I didn’t get.”

Interestingly, Chin didn’t set out to become a filmmaker, though he did record plenty of footage during his first attempt to climb Meru. That expedition wasn’t successful, due largely to a snowstorm. But Chin, Anker, and Ozturk did successfully scale the mountain on their second try and Chin filmed that attempt as well.

Yet he didn’t know how to shape all of that footage into a coherent narrative film. That is until he met documentary filmmaker Elizabeth Chai Vasarhelyi. After looking at everything Chin filmed, she figured out how to craft a story. The two continued to collaborate on projects, eventually co-directing Free Solo and winning an Academy Award.

Chin and Vasarhelyi’s latest documentary is The Rescue, which chronicles the 2018 effort to save a boys soccer team — 12 players and their coach — from an underwater cave in Northern Thailand. The rescue mission was led by amateur cave-divers whose hobby suddenly took on extreme importance.

The Rescue was released in theaters in October, but as a National Geographic documentary, the film will likely eventually land at Disney+.

Related: Alex Honnold will climb new routes in Greenland for Disney+ docuseries “On The Edge”

There and Back: Photographs From the Edge will be released on Dec. 7, available at bookstores and online booksellers includin Amazon, Barnes and Noble, and Bookshop.org.