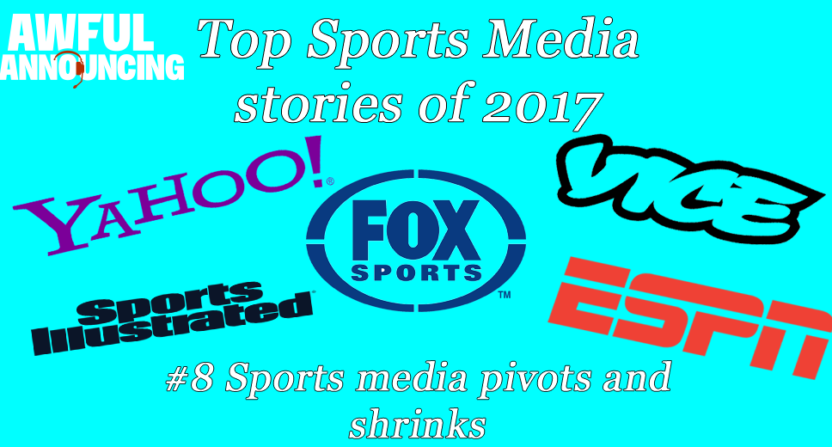 As a reader of Awful Announcing and a follower of sports media, you know that it’s been a rough year in this industry. Nearly a week has gone by without some form of bad news for a website or company providing content we’ve enjoyed deciding to change direction.

In most cases, those decisions have resulted in writers, reporters and commentators whose work we’ve followed suddenly being unemployed and forced to find new outlets through which to make a living. Some of them will remain unseen for a while, except for social media, staying under contract until their deals expire. Others will move on to different fields, leaving an industry in which jobs are increasingly difficult to come by and outlets offering work are shrinking.

Which were the notable outlets that contributed to the dwindling of sports media? What were the key decisions that were purportedly intended to help the industry and ensure its future, but instead cast that future in doubt for so many?

No development cast a bigger cloud over sports media in 2017 than ESPN conducting mass layoffs to reduce costs under mandate from corporate parent Disney. The network laid off hundreds of employees, adversely affecting both the broadcast and online sides of the company, and sending many familiar names into unemployment. No sports media executive was under more pressure than ESPN president John Skipper and the toll of letting so many people (some of them with the company for decades), while also trying to reshape the company for a new age of digitally-dominated and consumer-exclusive media in the face of continued subscriber losses, may have been starkly demonstrated by his shocking resignation.

Among the names that are no longer contributing to ESPN as a result of the mass layoffs were baseball columnist Jayson Stark, NFL reporters Ed Werder and John Clayton, college sports reporters Brett McMurphy, Andy Katz and Dana O’Neil, NBA reporters Marc Stein and Chad Ford, anchors including Jay Crawford, Jaymee Sire and Sara Walsh, studio analysts such as Danny Kanell, Trent Dilfer, Ron Jaworski and Merril Hoge, and hockey coverage was essentially wiped out (at least until Greg Wyshynski was hired from Yahoo Sports).

Plenty more anchors, most of them working on SportsCenter, will likely be dismissed in the weeks and months to come as their contracts run out and some of those productions are passed on to the regional sports networks that ESPN just acquired from Fox.

Those in front of the camera and with prominent bylines weren’t the only ones who lost jobs, either. Many behind-the-scenes employees, including longtime producers, were let go in the torrent of layoffs. Gus Ramsey, David Brofsky, Stu Barbara and John Sawatsky were among those who had been with ESPN for decades, shaping and mentoring the careers of so many on-air personalities and reporters who made the transition from print to television.

In the wake of so many changes, ESPN will look different in 2018 and will continue to change in terms of on-air (and online) product and production behind the scenes. That will almost certainly keep fueling the narrative that the network is dying, though many of these changes (and acquisitions in light of the Disney-Fox merger) were made to breathe new life into the company. How those moves pay off will be something frequently monitored in the coming year.

Fox Sports pivots to video, waving the flag for an industry-wide directive

Another upheaval in sports media was the decision by Fox Sports to overhaul its digital operation, letting virtually all of its sportswriters go as the company attempted to “pivot to video.” Awful Announcing reported in-depth on Fox Sports’ new direction, dictated by then-President of Fox Sports National Networks Jamie Horowitz, in which sportswriters were often asked to ghost-write for the network’s on-air personalities and many editorial staffers — including editors and producers who were successful elsewhere, such as Pete Vlastelica and Mark Pesavento — moved on or were let go. Horowitz had no regard for news and analysis which could be found at other sites, favoring content and talent that was exclusive to Fox Sports and its brand.

Talking heads and pundits such as Colin Cowherd and Skip Bayless was touted and promoted over respected sportswriters such as Stewart Mandel and Bruce Feldman, along with burgeoning talents like Dieter Kurtenbach. Renowned baseball writer Ken Rosenthal was still reporting on Fox’s MLB broadcasts but had no online outlet for his “print”reporting, putting his columns on Facebook because that work had no home at FoxSports.com, until he moved to The Athletic.

“Pivot to video” became a dreaded, cynically viewed phrase in the industry, a maddening example of corporate-speak intended to cover up a move toward cheaper production and less substantive content in the name of saving money. Despite so many companies making this transition, consumers never seemed to favor such moves. How many of them expressed a preference for watching a video over reading an article. How much information and insight was conveyed in a two-minute video as opposed to a 500- to 700-word article?

Consequently, the Fox Sports website suffered huge losses in traffic and audience engagement. One report had FoxSports.com losing 88 percent of its audience after making what looks like a fatal pivot. Sites that moved to video over writing also lost millions of page views as a result of the change. If this was the future of the industry, it appeared to be a bleak one.

Layoffs were prevalent throughout sports media

Very few outlets were spared from painful changes in 2017. Several others made painful cuts and laid off many writers and editors, regardless of whether the company chose to pivot to video or not. College basketball reporters Seth Davis and Lindsay Schnell were part of Sports Illustrated‘s layoffs. Bleacher Report pushed out Barrett Sallee and King Kaufman. VICE Sports virtually shuttered its entire operation in favor of video, letting go writers and editors like Jorge Arangure and Aaron Gordon. FanRag Sports laid off several writers, including John Perrotto, Adam Biggers and Steven Goldman, also citing a preferred emphasis on video. Vocativ was a site lesser known among sports media fans and observers, but Joe Lemire was among the prominent writers let go there.

Yahoo! Sports laid off two editors from its hockey blog, Puck Daddy, a decision that precipitated Greg Wyshynski leaving the company and eventually moving to ESPN. Kelly Dwyer — editor of the site’s NBA blog, Ball Don’t Lie — was also let go, prompting him to start up his own subscription basketball site. (Yahoo continues to overhaul its NBA coverage, shuttering Ball Don’t Lie and The Vertical to pull its coverage under an overall NBA umbrella. Will the site’s other sports blogs, such as Big League Stew and Shutdown Corner, eventually follow suit? [UPDATE: Shutdown Corner might be next, as its Twitter handle has been changed to @YahooSportsNFL.]) The company’s eSports site was also shuttered as Yahoo pared down its content prior to a corporate merger with Verizon.

Will 2018 be any better — or at least, less painful — for sports media? The hope is that the worst has passed and that after so many layoffs and brutal upheaval, there’s nowhere left to go but up and on. But as sites continue struggling to find revenue and networks stave off subscriber losses, the knife could continue to slice. Very few in the industry feel safe these days. Unfortunately, that probably isn’t going to be different in the year to come, which is a stark reality to accept. The only reliable constant — in any industry, really — is change.

Yet maybe, just maybe, websites and news outlets pivoting to video will be something left behind.