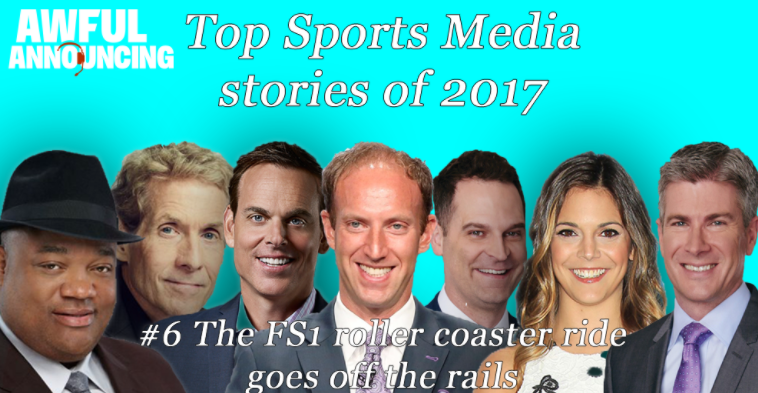 One of the biggest stories in sports media this year has been the tumultuous 12 months at ESPN, which * spoiler alert * we will get to later on in the countdown. Yes, it’s true that Bristol has felt like they’ve been under siege this year thanks to everything from layoffs to feuding with the President of the United States to the abrupt resignation of their president, John Skipper.

With ESPN facing so much turmoil, one would think this year would have been the perfect opportunity for FS1 — the network with the biggest dreams of challenging them for sports media supremacy — to gain a stronger foothold with fans and make up significant ground in their quest.

Alas, FS1 faced as many challenges as ESPN in a year which saw their last remaining original stars depart, a disastrous “pivot to video” for their website, and the controversial ouster of their own executive. In FS1’s relatively short history, 2017 will go down as a year that will be a significant mile marker in their journey to take on ESPN… but likely for the wrong reasons.

The biggest development that happened at FS1 this year was the controversial departure of former ESPN and Today executive Jamie Horowitz, who was brought to the network to bring his “Embrace Debate” mantra to FS1. In July, the Horowitz Era came to an abrupt end at Fox Sports when he was fired on July 3 in the midst of an investigation into sexual misconduct. The news sent shock waves around the media world, months before we would see the downfall of the likes of Charlie Rose and Matt Lauer in similar scandals. In the aftermath of Horowitz’s firing, there were rumblings of a potential lawsuit, but there’s been radio silence from Horowitz for months now.

Fox Sports bet big on Horowitz, making him their President of National Networks. In a short time, Horowitz remade FS1 in his image. The programming that tried to build a culture at FS1 that differentiated itself from ESPN would soon be a distant memory. Any sense of originality and creativity was gone, replaced with the yelling and arguing of ESPN retreads like Skip Bayless, Jason Whitlock, and Colin Cowherd. Between them, the Embrace Debate movement can represent well over half a day of FS1 programming between live airings and replays.

Today alone, FS1 will air 14.5 hours of debate and sports talk programming in a 24-hour time period. Hopefully this is just a rhetorical question, but is there really anyone who exists in the universe who actually wants this?

The last thread of FS1’s original vision and personality evaporated when the network’s last remaining Day 1 stars departed this year. Fox canceled Fox Sports Live in February and allowed Jay Onrait and Dan O’Toole to return to Canada. While the writing had been on the wall for months for Onrait and O’ Toole’s departure, it was still a sad sight to see. The Canadian pair are two of the most talented, humorous sports anchors working today. And yet, it seemed like FS1 never knew what to do with them.

Fox Sports Live might as well have been an HGTV show with the number of renovations that took place in such a short period of time. For only a few brief time did it seem like FS1 hit on the correct formula, letting Onrait and O’Toole do the show they did in Canada that made them so successful. Of course, soon thereafter they’d be broadcasting from a broom closet and trying to do a late-night show with few highlights. Then they would be gone from the network entirely.

Then there was Katie Nolan, one of the biggest rising stars in sports media who became a household name at FS1. Fox Sports let her walk as well and now she’s at ESPN appearing on a variety of platforms, with an even brighter future in store. It just seemed as if FS1 gave up on Nolan, which is puzzling given her talent. Like Onrait and O’Toole, and anyone who wasn’t of the “Embrace Debate” ilk, it seemed as if FS1 had nothing meaningful for them. 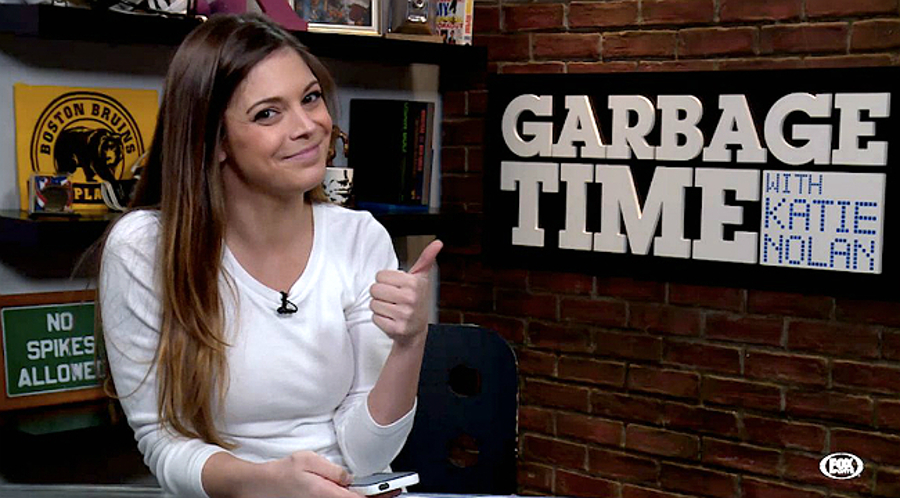 But it wasn’t just the television network of FS1 that Horowitz transformed. It was online as well. Less than two weeks before Horowitz was fired, Awful Announcing published an in-depth report telling how Horowitz had also taken over FoxSports.com. There were massive layoffs at Fox Sports Digital, as the website was reduced to nothing more than a promotional vehicle for the television side. There would be no more written articles on FoxSports.com — no analysis, no viral posts, no news reports, no listicles, no writing whatsoever. Instead, there would only be video.

What’s left of FoxSports.com looks like the wreckage of where a legitimate sports website used to be. The “pivot to video” has quickly made Fox Sports Digital completely irrelevant in the digital age. (That’s a bold strategy, Cotton, if there ever was one.) The three top stories on FoxSports.com this morning were Skip Bayless saying why Tom Brady is the MVP, Colin Cowherd comparing Giannis Antetokounmpo to LeBron James, and Jason Whitlock talking about LaVar Ball. You’ve come this far, so at least finish this article before you go racing over there to click on those videos.

Not only has FoxSports.com become the punchline of the industry, but their web traffic has been decimated as well. A report from September indicated that FoxSports.com lost 88 percent of its pageviews thanks to their “Pivot to Video.” The tale of FoxSports.com may be the biggest case of self-destruction in sports media history.

At this point, it’s natural to wonder whether there were actually any positive developments at FS1 in 2017. On the rights landscape, Fox scored a major victory by getting a bigger slice of Big Ten rights. FS1 aired some big college football games this fall and anytime they can showcase programs like Ohio State and Michigan, it’s an important step forward.

Fox and FS1 were the only networks to gain viewers in college football this season, thanks to the new deal with the Big Ten. And while it may not have completely lived up to the initial hype, at least Ice Cube’s Big 3 league gives FS1 some much needed inventory in sports rights and will return for a second season (where the games will be shown live this time).

On the programming front, it’s true that the debut of First Things First with Cris Carter and Nick Wright brought yet another debate show to FS1 with the same formula. However, the show that kicks off the FS1 daily schedule is a more palatable version of the format without the network’s most bombastic personalities. Wright, in particular, has been a solid addition to FS1, a network that desperately needs more fresh faces to stand out amidst its platoon of former Bristolites. [Editor’s note: Wright is the guest on the latest episode of the Awful Announcing podcast.]

Going into 2018, that just about sums up where FS1 is at the moment, doesn’t it? There are a few good things happening here and there, but they are getting harder and harder to find. And it all seems to still be overshadowed by the cloud of the Horowitz Era and the inescapable presence of Bayless, Cowherd, and Whitlock. Trying to become ESPN Lite was never going to actually turn FS1 into a real rival for ESPN. It was a failed strategy from the beginning. But it’s all FS1 has at the moment.

Where does FS1 go from here in 2018? Does FS1 stick with “Embrace Debate” moving forward, even without the person who brought it to the network? Do they follow Jason Whitlock (and formerly Clay Travis) down the road of turning FS1 into the sports version of Fox News? Do they try to rebuild their non-existent digital presence? Do they attempt another rebrand and try something entirely new yet again? Thanks to a roller coaster ride in 2017, there are more questions than answers for FS1 for 2018 and beyond.