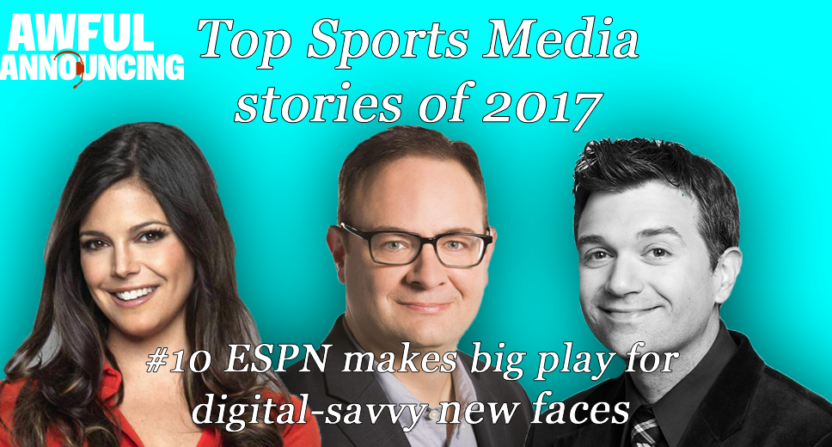 Welcome to Awful Announcing’s year in review, in which we count down the 10 biggest sports-media stories of the year. We begin with ESPN’s hiring of several big-name personalities, who bring established brands and devoted followings to the Worldwide Leader.

Much attention was paid this year to ESPN’s two massive rounds of layoffs — and rightly so. For many, 2017 was the year ESPN stopped being a dream job and became just another gig in a fragile industry.

But even as ESPN shed employees both in front of the camera and behind the scenes, it also did plenty of hiring in 2017. ESPN brought on The New York Times‘ Sam Borden as an investigative reporter and The MMQB’s Emily Kaplan as a hockey writer and BuzzFeed’s Joel Anderson as a college sports feature reporter, among others. All are talented and valuable and make ESPN better.

But three 2017 hires in particular seem to offer a hint at where America’s largest sports network is going and what it values these days in a front-facing employee: NBA reporter extraordinaire Adrian Wojnarowski, NHL blogger and analyst Greg Wyshynski and versatile on-air personality Katie Nolan. All are highly successful, all have established themselves online, and all arrive with loyal audiences already behind them.

Let’s start with Wojnarowski, the best NBA news-breaker working and probably the most famous basketball reporter in North America. As Woj built an empire at Yahoo, the New Republic described his relationship with ESPN as something like Nike vs. Adidas meets the Hatfields and McCoys. Then, in April, ESPN laid off Marc Stein and several other prominent NBA writers, and by July 1 Woj had officially defected to Bristol. The man with the NBA’s most valuable Twitter account had found the company best able to leverage it.

Wyshynski does not have Woj’s rolodex (no one does), but he does boast a rabid following of hockey fans, which made him an ideal centerpiece for ESPN’s rebuilt NHL operation. Having laid off much of its already slim hockey editorial staff in April, ESPN needed a lead NHL writer who could wear many hats and effectively cover the league at large. And Wysh, who built Yahoo’s Puck Daddy into one of the internet’s best sources of hockey content, fit the bill. He jumped aboard in October.

ESPN’s courtship of Nolan played out over months of reports and rumors and speculation about her future at Fox. Finally, in October, the network announced it was bringing in the former “Garbage Time” host, who would have a “prominent digital presence.” She quickly began appearing on ESPN shows, as plans crystallized for a podcast and a web show. ESPN appears interested in growing its digital audio and video presence, and Nolan, with her legions of fans, figures to be at the center of that initiative.

On the surface, Wojnarowski, Wyshynski and Nolan have little in common. One is known for his reporting, another for his analysis and another for her on-air presence. But a common thread runs through their hirings: Each of them brings a ready-made digital audience and an understanding of what plays online. Twitter is far from the be-all end-all measure of digital footprint, but consider that Woj has 1.2 million followers, Nolan has 365,000 (plus 134,000 on Instagram) and Wysh has 184,000. All three have personal brands that transcend the publication they work for. People want to follow, read or listen to them wherever they are.

Those followings appeal to ESPN not because they drive traffic (Twitter is notoriously bad at that) but because they indicate brand loyalty. In a media landscape in which many people simple click whatever link is in front of them, ESPN is well-served to bring on people who digital readers, viewers and tweeters will devotedly flock to. As long as the Worldwide Leader employs your favorite NBA reporter/hockey analyst/web-show host, you can’t run away, even if you want to. There are plenty of places to find NHL takes, but there’s only one place to find Greg Wyshynski’s NHL takes. 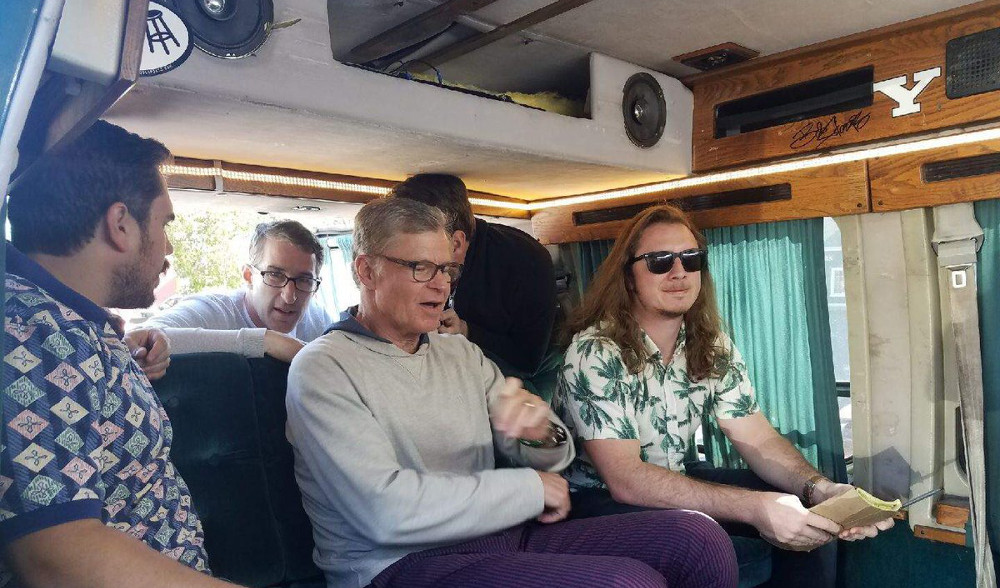 The same bring-your-own-audience approach helps explain ESPN’s ill-fated “Barstool Van Talk” show. No one inspires greater devotion than Barstool, and ESPN figured it could import some of PFT Commenter and Big Cat’s following to its airwaves. That effort was doomed by Barstool’s seedy reputation and antagonistic history with ESPN employees — turns out you can’t draw the fans without also drawing the detractors — but that doesn’t necessarily mean the broader strategy isn’t sensible.

So what does this say about ESPN’s future? It says that a network with a history of homegrown stars might no longer have the patience to cultivate them. Some of the employees laid off in April were well-established big-names, but many more were talented reporters or anchors who fell short of A-list status. In replacing those foot soldiers with pedigreed outside hires, ESPN has indicated a preference for ready-made superstars. After all, why groom, say, Ethan Sherwood Strauss into the next great NBA reporter when you can simply hire the current great NBA reporter?

In 2017, there were jobs available in Bristol. You simply needed a lengthy resume and a whole bunch of Twitter followers to get one.