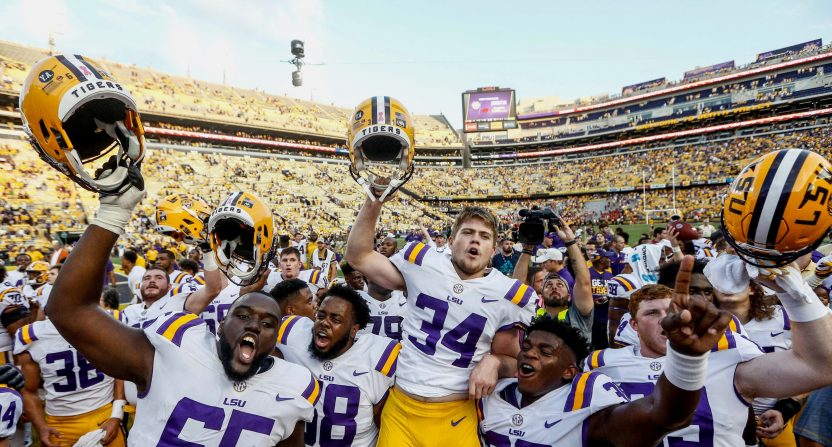 This week, most of the major sports networks began to release their schedules for the first few weeks of the 2018 college football season. As expected, those networks boasted about the quality of their schedules, with CBS proclaiming they had “the best games from the best conference” (and also announcing their CBS Sports Network coverage with much less fanfare), ESPN boasting that they would be showing “the best games. The most games” (and, like with CBS, a more subdued release for SEC Network), and Fox vowing to “own the weekend” with their schedule. Pac-12 Network also released their schedule, but that release was about as milquetoast as you’d expect.

But instead of just copy and pasting the schedules, we thought it might be more interesting to look at all of the windows during each of the first three weeks of the season (sorry, Week 0 fans), determine which network had the best and worst games in those windows, and come to a conclusion about which network really owns, has the best games, or is otherwise a top destination for college football to start the season.

This is more about quality (a word that is totally and completely arbitrary) than quantity, and a network won’t be punished if it isn’t airing a game in a window. We’re also not going to count *every* window, just the main ones (think 12 PM, 3 PM, and 7 PM on Saturday, and just one “best” and one “worst” for Thursday and Friday in Week 1 – a half hour or hour either way isn’t going to be its own window, it’ll be folded in, and there aren’t enough late games for me to count in the early part of the season). I’m also not going to count games exclusively on FSN, ESPN+, or ESPN3, because one of those games would never fall into the “best” category and would almost always be a strong contender for “worst”.

Thursday, August 30th
Best game: Northwestern at Purdue (ESPN). This isn’t a blockbuster game by any stretch of the imagination, but Northwestern won ten games last year an Purdue was shockingly competent for much of last season. This could surely be a fun matchup.
Worst game: New Mexico State at Minnesota (BTN). I waffled on this one a bit, because most of the Thursday night games this week are mediocre (at best), but I gave this matchup the nod since I can’t get remotely excited about it. Weber State vs Utah on Pac-12 Network is probably a worse game, but the slight possibility of a Weber State upset interests me more than this game between a pair of somewhat unexciting teams that floated around the .500 mark last season.

Friday, August 31st
Best game: San Diego State at Stanford (FS1). Yeah, the Aztecs have lost Rashaad Penny, but they upset a ranked Cardinal team last year in their third game of the season. Both of these teams also went to bowl games last season, which doesn’t hurt on a weeknight in the first couple weeks of the season.
Worst game: Syracuse at Western Michigan (CBS Sports Network). A 4-8 power conference team traveling to a .500 Group of 5 school that missed a bowl game. That’s a no for me.

Saturday, September 1st
Best noonish game: Florida Atlantic at Oklahoma (Fox). Lane Kiffin’s FAU Owls against a team that was in the Playoff last season? Sign me up. Sure, FAU is probably going to get pummeled, but there’s probably going to be a whole lot of points scored, and that’s fun.
Worst noonish game: Kent State at Illinois (BTN). Each of these teams went 2-10 last season. It’s a rare situation where a Rutgers game in the same window against similar middling opposition on the same network looks like the better option, but here we are.

Best 3 PMish game: Washington vs Auburn (ABC). Don’t need to expand on this one too much – this might end up being the game of the day.
Worst 3 PMish game: Eastern Illinois at Arkansas (SEC Network). The post-BERT era kicks off with…the 4-8 Razorbacks hosting an Eastern Illinois team that went 6-5 in the OVC last year. You can spend your afternoon better than watching this game.

Best 7 PMish game: Louisville vs Alabama (ABC). This is another game that I don’t exactly need to analyze. It’s the reigning national champions against a Louisville team that will be plucky at worst (even without Lamar Jackson).
Worst 7 PMish game: Charleston Southern at Florida (SEC Network). It absolutely kills me that I arbitrarily excluded games on regional networks and streaming platforms, because there are some flat out clunkers there (including an absolutely wretched Abilene Christian-Baylor matchup). Florida will probably go into this one ranked, because they’re Florida, but they were awful last season and Charleston Southern wasn’t exactly an FCS powerhouse.

Saturday, September 8th
Best noonish game: UCLA at Oklahoma (Fox). Chip Kelly’s second game back in college comes in Norman? I’m here for this.
Worst noonish game: Nevada at Vanderbilt (SEC Network). Don’t to this to yourself. You have options.

Best 7 PMish game: USC at Stanford (Fox). Remember what I just said about early season conference games? That’s also true for this one. Big Fox has a banger of a day here.
Worst 7 PMish game: Southern Utah at Oregon State (Pac-12 Network). Southern Utah was good for an FCS school, but when they traveled to Eugene last season to take on a mediocre Ducks team, Oregon put 77 on the board. Oregon State went 1-11 last season, and their only win was by three over Portland State. This game edged out another gross matchup on another league network, Western Illinois vs Illinois on BTN.

Saturday, September 15th
Best noonish game: Miami at Toledo (either ABC, ESPN, ESPN2, or ESPNU). None of the noon games stand out too high from the pack aside from this one and Oklahoma-Iowa State. But given Toledo’s quite strong 2017 (despite a pounding at the hands of these same Hurricanes) and Miami’s return to glory, I have no issues giving this the nod.
Worst noonish game: UTEP and Tennessee (SEC Network). UTEP didn’t win a game last season. Tennessee won three of their first four, then won just once over the rest of the season. The Volunteers can’t be that bad again in 2018, especially with a new coach in Jeremy Pruitt, but this is not an appealing matchup on paper.

Best 3 PMish game: LSU at Auburn (CBS). Washington and LSU in two of the first three weeks of the season. Take a bow, Auburn. CBS’s early season SEC schedule is fantastic, and another great conference matchup is overshadowing non-conference games on other networks.
Worst 3 PMish game: Miami (Ohio) at Minnesota (BTN). There are a lot of mediocre games in this window, but these two teams both finished 5-7 last year. I’m pretty sure it’s the only non-streaming game in this window featuring two non-bowl teams, so it gets the nod almost by default.

So, we’ve broken down the timeslots, and here are the final tallies…

Believe it or not, the early college football schedules seem…somewhat even?

Five of the best games are on ESPN’s family of networks, while four are on Fox networks and two are on CBS. On the other side of the coin, five of the worst games are on ESPN’s networks, three are on Fox’s, two are on CBS’s, and just one is on the Pac-12 Network. Given the sheer amount of games ESPN is airing, it’s not at all surprising that they have so many disappointing games – after all, CBS and Fox often pluck the best games from the SEC, Pac-12, Big Ten, and Big 12 and ESPN gets left with some of the less appealing matchups.

I think its also noteworthy that eight of the 11 worst games are on league-specific networks, another one is on ESPN’s fourth-choice network for college football, and two are part of CBS’s hodgepodge of non-SEC conference rights. ESPN and Fox aren’t throwing bones to their less-prominent networks (nor should they), and they’re also not in the habit of putting awful matchups on their marquee networks (again, nor should they). In short, if you want to watch the best football, you’re probably going to be watching a broadcast network.