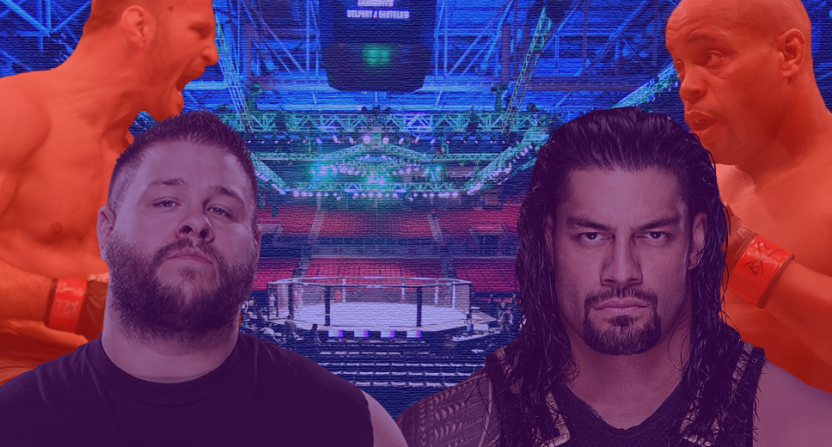 With WWE (Fox) and UFC (ESPN) signing new TV deals for somewhere in the same ballpark ($200 million-ish a year from Fox to WWE and a currently undisclosed amount from NBC, $300 million-ish a year from ESPN to UFC), which do you think will mark the better investment and why? Both deals run five years, though WWE’s deal with Fox starts a year later than UFC’s deal with ESPN.

Our staffers sounded off.

Andrew Bucholtz: I think the deals with WWE seem like the better investment right now. WWE has been pulling pretty good ratings for RAW and Smackdown, often beating even (early-round) NBA playoff games, and even their low recent numbers are around 2.7 million viewers (RAW)/2.4 million viewers(Smackdown). By contrast, some of the best recent UFC Fight Night ratings have still been around only 870,000 or 956,000 viewers.

I think the two-network approach with WWE is also going to work out well for everyone involved. Fox and USA (and maybe USA parent company Comcast or sister company NBC) can each focus on promoting their show, and there’s maybe more incentive to promote it when there’s another WWE show out there that’s not on your network. Having Fox swoop in and put Smackdown on primetime broadcast TV (albeit on Friday nights, but still) should lead to a further audience bump, and having multiple networks with reasons to promote your sport can be a good thing, as we’ve seen with sports like the NFL and the NBA. And splitting up RAW and Smackdown allows both USA and Fox to get some wrestling content, and allows WWE to make money from both of them (and likely more than they would have if they’d kept the two shows together).

The UFC deal could work out well for ESPN, too. It gives them a lot of content, and the ESPN+ side of that is perhaps particularly interesting; this is one of the biggest deals on that side so far, and something that might lead to more subscribers. But the UFC didn’t get anywhere close to the TV money they were looking for, and that says a fair bit about the state of their product right now.

This is a bit of a change, as just a few years ago, the UFC looked to be on the rise, and there were doubts about wrestling’s future. But the wrestling audience has held up, and WWE seems to have done a better job of building new stars than the UFC has; many of the biggest UFC names have retired (Ronda Rousey) or otherwise fallen out with the promotion (Conor McGregor), and UFC president Dana White seems to be doing more to create controversy than anything else lately. (Like, say, giving Greg Hardy a trial fight.) It helps that wrestling can bring in more storytelling moments and do more outside-the-box things, such as the Matt Hardy/Bray Wyatt “Ultimate Deletion” that got tons of buzz; it’s tougher to do anything like that in mixed martial arts, which is an actual competition and has stricter rules on what’s allowed. But just in general, WWE seems better-watched (on North American TV, at least), better-run, and a better bet to sign a TV deal with right now.

Ken Fang: I’ll agree with Andrew. The short-term winner is WWE. With exposure on a broadcast network starting in 2019, fans who cut the cord will have access to wrestling without having to resort to other means to watch. And while RAW is the WWE’s main brand, it’s not hard to think that with Fox on board, that the priorities could shift to SmackDown on Fridays, similar to the NFL when NBC took over the Sunday Night Football package and Monday Night Football went to ESPN back in 2005.

UFC on ESPN will raise the profile of the sport, but the x-factor here is ESPN+. Will UFC be an attraction to the service. With some exclusive cards, that might help, but without the linear ESPN as part of ESPN+, it’s hard to think that people will want to subscribe for MMA only. And while ESPN is hoping that other sports could get sampled by MMA fans, it’s hard to think that as a reality at this point.

Still, big ESPN gets some cards as well, but finding places for them during college football season might be tough, as the Worldwide Leader goes all in with games on Saturdays. It’s going to be interesting to see how this will fit in.

Long-term, UFC might be a winner, but it all depends if it can get a personality like a Ronda Rousey to transcend its ranks and become mainstream.

For now, WWE on Fox is my winner.

Joe Lucia: In my opinion, it depends what your network needs the most. The UFC provides more programming in total than WWE, since with WWE, you’re only getting two hours a week and not the hours of bumper programming and reruns to fill time, in addition to live shows, that you get with the UFC. But WWE also provides a seemingly guaranteed chunk of higher viewership, while live UFC viewership can wildly fluctuate based on the fight card in question. If you’re looking for quantity, UFC is the better bet, while if you’re looking for quality, WWE is probably what you want.

With that being said, I understand why both ESPN and Fox went the way they did. ESPN has a new streaming platform that it needs to bolster with unique content. Fox doesn’t have that platform, and the sheer amount of live events that the UFC holds each year can be too much for one cable network (especially one that holds the rights for college football and college basketball games). Fox also bolsters its broadcast network with Smackdown, giving it a strong weekly draw that the UFC simply could not provide on a weekly basis.

However, UFC’s migration to ESPN still creates questions for both ESPN and Fox and their strategies going forward. Fox will have huge schedule gaps on both FS1 and FS2 following the UFC’s departure, and ESPN has a bit of a schedule crunch in the fall and winter due to their absurd amount of college sports rights. How these networks cope with the UFC and these schedule questions is going to be an interesting thing to keep an eye on in 2019.

Jay Rigdon: WWE has a longer track record of being a viable television property. Whether or not you personally enjoy the product, the audience is clearly there, and through attrition and consolidation, “WWE” is now synonymous with professional wrestling. (Though Vince McMahon would probably rather be synonymous with sports entertainment.)

UFC is certainly a valuable property as well, but it’s more volatile; at seemingly any moment, a top star could get hurt, suspended, or even arrested, which could render an entire promotional campaign pointless.

That’s not the case in WWE, and while you lose the unscripted endings of UFC, televised dramas are scripted and there’s still, you know, drama. People watch.

Plus there’s the concussion factor; while combat sports will always have an audience, if concerns about head trauma are causing people to turn off the NFL, that has to be a factor to consider when wondering if the UFC can continue to expand its reach. Then again, WWE won’t be immune to these discussions either. They’re not falling on pillows.

Matt Yoder: This is a great question, but I’m going to go with WWE and Fox. For as big as ESPN’s promotional machine is, I’m not sure they can manufacture the stars that UFC needs to get some momentum again. Weirdly enough, some of the most recognizable UFC fighters right now are more associated with WWE. It’s not a great situation when UFC is relying on the likes of CM Punk and Brock Lesnar to sell the sport to the mainstream while one of their former superstars in Ronda Rousey is in WWE. Finally, WWE can be an anchor for the “new Fox” on Friday nights every single week, while UFC is going to have to fight with the likes of the NFL, NBA, and college football for attention on ESPN airwaves.