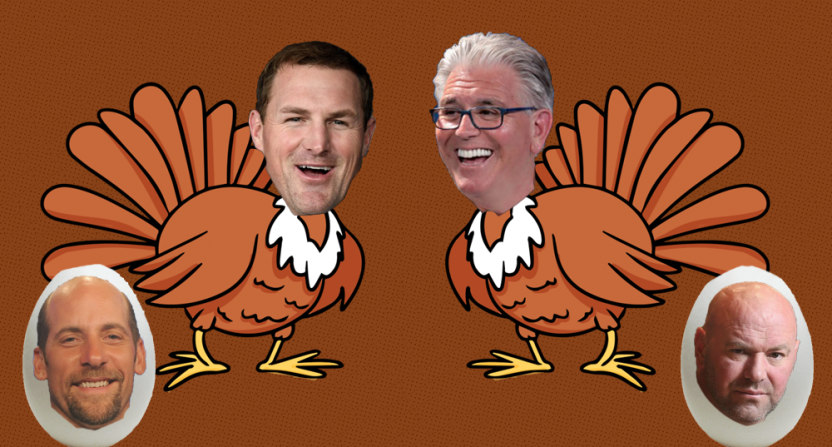 It’s a dumb tradition every year around Thanksgiving here at AA – the sports media turkeys of the year. Who in sports media had a crappy year and deserves to be lampooned for it?

Last year, the reader’s choice for the turkey of the year was all of LaVar Ball’s enablers on TV, who have thankfully faded away this year. The overwhelming choice of our staff was former Fox head (and newly minted DAZN consultant) Jamie Horowitz, who had a downright wretched 2017.

This year, things will be a bit different. Horowitz has been out of the limelight all year until this week. Ball has not been enabled nearly as much, probably because LeBron James is in LA and has zero desire to deal with LaVar Ball’s bullshit.

And now, our staff’s choices for the 2018 sports media turkey of the year…

Andrew Bucholtz: I’m going to go with UFC president Dana White. White has a long history of media feuds, especially with Ariel Helwani (White briefly banned Helwani from UFC events before backpedaling under pressure in 2016, and also booted Helwani off Showtime’s Mayweather-McGregor press tour broadcasts in 2017), but this last calendar year saw some particularly strange behavior on his part. First, there was his repeated floating of the idea of Floyd Mayweather coming to the UFC with little to back that up, which Mayweather called “bullshit,” accusing White of using his name to try and gain leverage in TV deal talks.

Speaking of that TV deal (which didn’t go nearly as well as the UFC had initially hoped), White repeatedly said all sorts of ridiculous things during those negotiations, including bashing ESPN, before he signed a deal with…ESPN. But hey, they’re far from the first partner White has made life difficult for; let’s check in with Showtime’s Stephen Espinoza, former UFC play-by-play voice Mike Goldberg, or White’s own fighters about how great working with him is. And this year also saw White get in an Instagram comment war, of all things, with Brendan Schaub of The Fighter and the Kid. Oh, and White’s latest and greatest hit is making the latest UFC 25-year-anniversary documentary all about his relationship with President Donald Trump.

White obviously played a major role in the UFC’s rise, and he deserves credit for that. But with the sport becoming more and more mainstream, White’s behavior stands out even more as unprofessional for the head of a major sport. That’s especially true when it comes to the regular media feuds, and it’s arguable that White isn’t currently helping the UFC overall. He can make the media rounds to repeatedly trot out lines like “fighting’s in our DNA,” but how much does that really sell the sport at this point? But while that claim is debatable in general, it’s clear that fighting with everyone from media to partners while promoting himself is in White’s DNA. For that, he’s my sports media turkey of the year.

Phillip Bupp: There’s a part of me who feels like it’s not his fault because ESPN is the one who put him in the MNF spot with no previous media experience, but I’m going with Jason Witten. There isn’t any kind way to say this: Jason Witten is terrible in his current position and I’m far from the only one who thinks that. I can tolerate bad announcing, but this current MNF setup is just so bad that it’s keeping me from watching any of the games in English, and I either watch something else or watch the game in Spanish. Witten being thrust into a primetime role perpetuates a mindset that any former Dallas Cowboy who was remotely popular while playing will be guaranteed a media career, no matter how good or bad they actually are. Some have excelled, but others, not so much. And when it comes to Jason Witten, he’s already facing an uphill battle.

Ben Koo: I’ll go with Mike Francesa. He reneged on a retirement, which isn’t the worst thing in the world, but since he’s returned, my god what a shitshow. We’re covering petty beefs with him almost twice a week and apparently he still hasn’t signed a contract and might leave again to focus on his irrelevant app. Self awareness is one of the most underrated personality traits there is and Francesa clearly has none, is declining in talent, and is too obtuse to ever take the high road and avoid another hit to his reputation.

Joe Lucia: I was racking my brain trying to come up with a good response, and I think I finally did – Jon Gruden.

The year started strangely for Gruden, with him being linked to the Raiders job, denying it, finally admitting it looked like he’d get the job, and then calling a playoff game (complete with a bizarre send-off) on ESPN before actually taking the job. This then forced us through an incredibly painful period of “who will replace Jon Gruden on MNF?” before ESPN made the disastrous decision to go with Jason Witten and Booger McFarland, and I’m getting a headache just thinking about those dark, repetitive weeks before the appointments were made.

But Gruden’s return to coaching is where he really has stood out this year. First, he criticized analytics and technology. Then, he traded Khalil Mack to the Bears and proceeded to make a whole bunch of weird comments about Mack and the Raiders’ pass rush. Next, reports began to surface that the Raiders were falling apart at the seams with Gruden back in Oakland. Finally, the Raiders completely gave up during a Thursday Night Football game with the 49ers,

Gruden’s Raiders have the worst record (tied with a couple other horrible teams) and point differential in the NFL. His former ESPN broadcast booth stomping grounds have turned into a complete disaster. Gruden’s reputation is in the toilet, and everything he’s touched over the last year has turned to shit. But hey, aside from that….everything is just fine.

Jay Rigdon: Calling a championship series or game is a privilege, theoretically reserved for the best of the best. In return, a commentator gets to voice potentially timeless moments, and they also have a built-in advantage: they don’t have to sell anything. The stage does the heavy lifting.

Which makes John Smoltz‘s postseason performance even more frustrating. Some critiques are personal preference, of course. You can’t please everyone. But it’s also hard to irritate everyone, and that’s what Smoltz flirted with, for one reason: he comes across as someone who really doesn’t like baseball.

That’s a problem! He might not like modern analytics, or launch angles, or a lack of small ball, or any number of things. But that puts him behind the times, and while a color commentator doesn’t have to be a cheerleader, he or she also can’t be the opposite. That’s what Smoltz flirted with, and it’s a shame that’s what baseball got for its biggest games.

Matt Yoder: In all my years of covering sports media I can never recall two broadcasters fired for fighting…each other. That’s what happened this year with longtime Detroit Tigers TV announcers Mario Impemba and Rod Allen. It’s unprecedented. Has anyone ever heard of a team needing to fire both their broadcasters because they got into a physical altercation over a chair? There are only so many MLB broadcasting jobs out there and even if they weren’t best friends outside of the booth, this certainly wasn’t the best way to go out. It’s one of the more ignominious endings to a broadcast pairing in a long, long time.