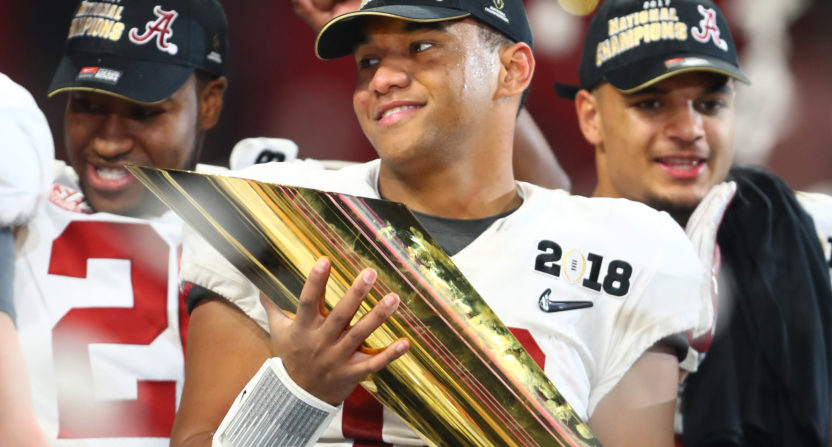 The college football season is over. That means narrative season has arrived. Here are 10 media stories you won’t be able to escape in the long eight months between now and more college football.

The playoff proved more successful than many anticipated, with two SEC teams meeting in the final. But it was a controversial year. Ohio State’s achievement was cast aside for Alabama’s potential, negating the years of precedent hat came before. For a purportedly “national” title, no one eliminated UCF on a football field, including an Auburn team that beat both UGA and Alabama during the regular season. Any playoff reform in reality will be minor. It’s not clear ESPN would want to pay more money for expansion. If any reform happens, it will be minor tweaks to committee recusals. The wildest scenarios may see the committee adding a male member young enough to not have prostate issues. That does not mean radical playoff reform won’t be an evergreen topic.

Jim Harbaugh and the Michigan Wolverines

Are you sick of Jim Harbaugh yet? Remember, it’s Michigan fergodsakes. Relevance is no matter. It just means more. Harbaugh, entering a pivotal fourth year, will still be the most interesting man in college football. Off the field stories will be relentless. On the field, former five-star Ole Miss quarterback Shea Patterson transferred in. Well-regarded former Arkansas offensive coordinator Dan Enos jumped on board as well. Almost every starter comes back from a Top 10 defense. Michigan should be among the more intriguing sleeper teams, to the extent the Wolverines can ever sleep on anyone. If you still think you can avoid hearing about Michigan, remember, they open the 2018 season at Notre Dame.

The SEC Being The Best Conference Ever

The college football playoff is three games, often decided on a few plays. That doesn’t stop the sweeping narrative emerging. Last year, the talk was of the ACC, in fact, being the nation’s best conference. One could not, many assumed in summer 2017, just walk into the Carrier Dome or BB&T Field. This year will be about SEC dominance, after having two teams in the final. Big Ten partisans will counter about the five B1G teams should begin 2018 ranked in the Top 15, four in one division. The conference also came a late-game Michigan collapse away from a perfect bowl record. No side will convince the other. But that won’t stop this ever-scintillating debate for a moment.

Ranking Anything and Everything

College football is not a year-round sport (a fact painfully manifest for those writing about it as freelancers). ESPN would like Signing Day to be a thing. But it is not an offseason anchor event like the NFL Draft or NBA Free Agency. The closest college football equivalent is the coaching carousel, which happens right at the end of the season. How will the media keep you talking about college football? Ranking anything and everything. Every media outlet published its “Way Too Early” Top 25. Most will swoop back for more sweet Top 25 action post-Signing Day, Post-Spring, and Pre-Season. Writers will rank players, games, schedules, weekends, how “good” jobs are, food spots, and anything you will read, argue about, and share with your friends.

Gus Malzahn may have made a targeted point about the SEC Network. But it holds up generally in college football media and every sport. The hypotheticals present more interesting discussions than the reality. Where LeBron opts to play in 2018 is more interesting than any regular season basketball game. Talking about which coaches are in danger of being fired and which could be hired is often more interesting than the game coming up. Things appear cold for now. Chip Kelly and Jon Gruden took jobs. The SEC West cleaned house. So did Florida. The most likely Power 5 positions to open are…Kansas? Illinois? The most significant name on the hot seat is Swagger Kliff Kingsbury? Maybe Larry Fedora? Something will come up, though. Rest assured.

College football is not an amateur sport, beyond the not paying the labor. This offseason, schools abandoned whatever pretense of amateurism remained. With every Power 5 school player now lounging and meeting in ostentatious, leather-clad, and flat-screened testaments to pure opulence, the money is getting plowed back into salaries. Schools spent absurd amounts on contract buyouts. Arizona State paid north of $12 million to swap in Herm Edwards for Todd Graham. That absurdity was trumped only by the salaries. The big belt buckles at Texas A&M are paying Jimbo Fisher $75 million. Gus Malzahn became a $49 million man with a whiff of interest from Arkansas. Dave Aranda signed a four-year $10 million deal to stay at LSU…as defensive coordinator.  Alabama coaches earned about $1.3 million in bonuses for winning the national title, which would have been enough to pay each scholarship player nearly $15,000.

Spring is the season where national reporters descend on college football campuses to profile head coaches. In a pure coincidence, each coach will be waking up at the crack of 4:30 am to squeeze in his daily 10-mile run with a sack full of potatoes strapped to his back. Those chiseled, glimmering physiques we see prowling the sidelines in September are built on the hard work put in on cold mornings in April.

The #MeToo movement is changing the tolerance of sexual harassment in the workplace and the potential legal liability for it. The movement is just starting to hit the sports world. Ole Miss let Hugh Freeze go over an escort scandal before the season. Arizona began 2018 jettisoning Rich Rodriguez amidst claims of organized adultery and sexual harassment. The workplace power dynamics are similar to entertainment and politics. One imagine those won’t be the only two coaches with unpleasant past actions that crop up.

Mike Gundy Having a Mullet

Yes, Mike Gundy still has a mullet. It’s voluminous. One would put strong odds on him entering his third-straight season with it. Too intemperate of a haircut for a man with a notably poor record against rival Oklahoma? Perhaps.