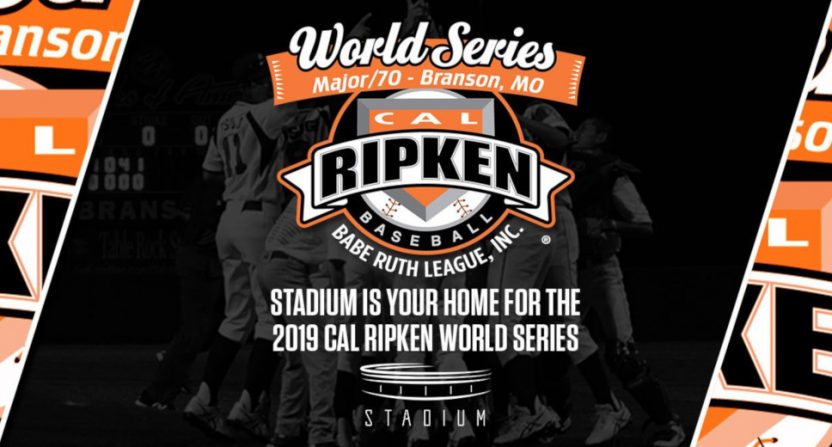 This week, veteran broadcasters Tom Ladd and Chuck Sebastian are in the middle of a test of broadcasting endurance. Ladd and Sebastian are providing play-by-play and color commentary respectively for 34 different live broadcasts over nine days on Stadium of the Cal Ripken Major/70 World Series, a 28-team 12-and-under tournament in Branson, MO that features both U.S. teams and teams from around the world. On Sunday, after the first two days of action and the first 10 games they were broadcasting, Ladd, Sebastian and Stadium senior vice president of live events Joe Riley spoke to Awful Announcing about this tournament and the broadcasting setup.

The Cal Ripken Major/70 format is run by Babe Ruth Baseball and largely features the same official baseball rules as the majors, albeit with shorter six-inning games, 50-foot pitching distances, and 70-foot basepath distances. It’s designed to help 11- and 12-year-old kids transition to the full 60-foot pitching/90-foot basepaths Babe Ruth Baseball uses at the 13-and-up levels. And the World Series here is quite the event; it features 28 of the top teams at this level, and it’s held at Branson’s Ballparks of America, which features two-thirds size replicas of Busch Stadium, Wrigley Field, Tiger Stadium, Fenway Park, and Ebbets Field. Ladd said it’s a great event to broadcast thanks to the level of play.

“The quality of baseball has been unbelievable. This is my third year here doing these games, and it’s amazing to see the talent level from the international kids and the U.S. as well, year in and year out. Some of these kids…we had an international game last night, these pitchers looked like they were high school pitchers, could have definitely competed at the high school level. Now, they’re throwing at 50 feet, but they were throwing some BBs. These guys are physically gifted; we’ve got guys just knocking the ball all over the ballpark. So that part of it’s been fun as well, the play on the field has been good, and just being able to call the games has been a joy.”

Sebastian said this is his second time at the event, and he’s been looking forward to coming back for a while.

“This is one thing that I really enjoy when I find out it’s on the calendar. Last year was my first year here and we did numerous games to begin before I joined Tom down for the championship game. I was a ball player at a little age, started at eight years old, played all the way through high school, a little bit after, and I actually got tickled coming out here to see these fields. I mean, they’re gorgeous. I wish I was twelve years old again, wanting to play, I was probably more excited than the kids. And I think that’s what shows when I do my announcing for a game.”

Riley said this event was a natural fit for Stadium given its timing, and given the quality of play.

“We’re always looking for great programming. We felt like getting in bed with the Babe Ruth organization that had 34 games in such a short period of time in August, when there isn’t really much going on except Major League Baseball, for us it was a home run, to be able to get involved and to be able to partner up with the Babe Ruth organization and get this elite play. That’s really what it is. I was talking to the crew, this is my first year and our first year broadcasting it, the one thing that I was just taken aback by was the great play. …The players are always making the routine plays for the most part, but they’re also making excellent plays out there.”

“It’s just that the way it’s run, the way it’s put together, it’s very professionally-done, it’s top of the line. I don’t think you’ll find another outfit that does anything similar to this. And the biggest reaction is watching the kids and these parents that are here cheering on their kids, they’re having a blast, they’re having a good  time. Everybody wants to win, but it’s not all about the wins and losses, I think it’s about the adventure and about the experience being here at Ballparks of America.”

Ladd said the Ballparks of America facilities are superb, and help make this feel like a big deal.

“It’s fantastic. I’m kind of the local guy here, just down the road in Springfield, so a little drive, about 40 minutes, and Branson is an annual spot for me anyway. We come here quite a bit. But this facility is just gorgeous, this Ballparks of America in Branson. So to come here and be able to broadcast these games for the kids, and meeting the kids, meeting the parents, and the officials that work this, the people with Cal Ripken, it’s just been a joy.”

“Sometimes it seems like ‘Wow, we’re doing a lot,’ but they go by pretty quick, and you look forward to doing the next game because of the talent that’s out on the field. It’s not like ‘Oh man, this one’s not going to be as good, they’re not very good.’ Each one of these teams are all-stars and they all bring their best game to the field, so you’re like, ‘Wow, that game was unreal, I can’t wait for the next one to happen.’ And the chance to see the teams from the international side of things, Puerto Rico, Korea, Japan, stuff like that that you don’t get to see on a normal basis, phenomenal talent with them as well.”

Ladd said he’s called a lot of sports, but he especially enjoys baseball, and the ability to just do straight play-by-play here is appealing.

“I love baseball, it’s my favorite sport to do anyway. I also do all the other ones,  I do basketball and football and soccer and volleyball and stuff, but I’ve always loved baseball. So just to sit here and do pure 12-year-old kids play-by-play; we don’t have a lot of added information as far as the prep, so basically it’s team A versus team B and we’re calling the game. There’s no game notes, we don’t have an SID working for the team, so it’s Johnny, you know, playing against Jeff and it’s just straight-up baseball and that’s just a lot of fun.”

The tournament also features rules to keep its players healthy, including a 85-pitch maximum for any player and mandated rest days between pitching appearances. Ladd said he thinks that’s a smart idea.

“They’ve got a pitch count per game in this tournament, I think that’s great. You’re not going to burn out the arms. I think the rules are good, they’re protective. They’re thinking about the players where other leagues in years past haven’t done that.”

Sebastian said he appreciates the shorter distances at this level, as he’s seen younger players struggle to adjust to the full dimensions without those. He also thinks the pitch counts and days of rest are important to help the players stay healthy.

“At one time, I was a coach and commissioner for Babe Ruth Baseball, thirteen, fourteen, fifteen-year-olds. And back then in Minnesota,  they went from 12 to the next age bracket and they went to the big diamond at the age of 13, so it was 60-90, coming off of the sixty forty seven. And a lot of these kids couldn’t get a ball across the diamond. They couldn’t wing it fast enough.”

“Pitch count, back then, I limited my kids to 75 no matter what it was. You could be throwing the greatest game of your life, but when you hit 75, you knew I was coming out to take the baseball. You read too many articles about kids doing Tommy John surgery at 12 to 13. So this was really kind of a thrill for me to see that somebody said ‘Hey, wait a minute. Let’s take them from 10-11, move them to 12, bump up the bases a little bit, bumps the mound back a little bit and get them prepared for the next step up. And by the time they’re older, during their teen years, they can play that 60-90 and not have to worry about it.”

“… A lot of these kids, they were all stars at 10 and 11 and 12. When they jumped up to that 13-year-old league, all of a sudden now they don’t look as good. And that can really get to a kid’s psyche. So I’m glad they initiated it. And I like the idea of pitch counts and days of rest; let’s stop this overuse of a young man’s arm.”

The tournament also sees quite a number of fans come out in person, especially for the host team and some of the international teams. Ladd said that further adds to the atmosphere.

“They have a host team here, which is the first time that’s happened. It’s kind of nice, I think, for the locals to come out and support some of the kids from the area. So there have been big crowds for those games here, and we had a huge crowd for our international game [Saturday], they really came out. They packed this St. Louis Field; there’s 500 seats here, but we had an overflow crowd of people watching the game.”

There are plenty of games ahead for Ladd and Sebastian, but they’re fired up about calling those. And Sebastian said he wants to encourage people to check this event out.

“If you’ve got any little ones or family members that play the game, you know, tell them to change the channel, tune into this and watch this a
little bit. They’re going to be very amazed at how much this is and what these kids do at the age of 12.”

The full schedule of Stadium’s Cal Ripken Major/70 broadcasts can be found here, with games running through August 10. Stadium can be accessed through their website, their app, several streaming services and social networks, and some over-the-air and cable channels depending on region.